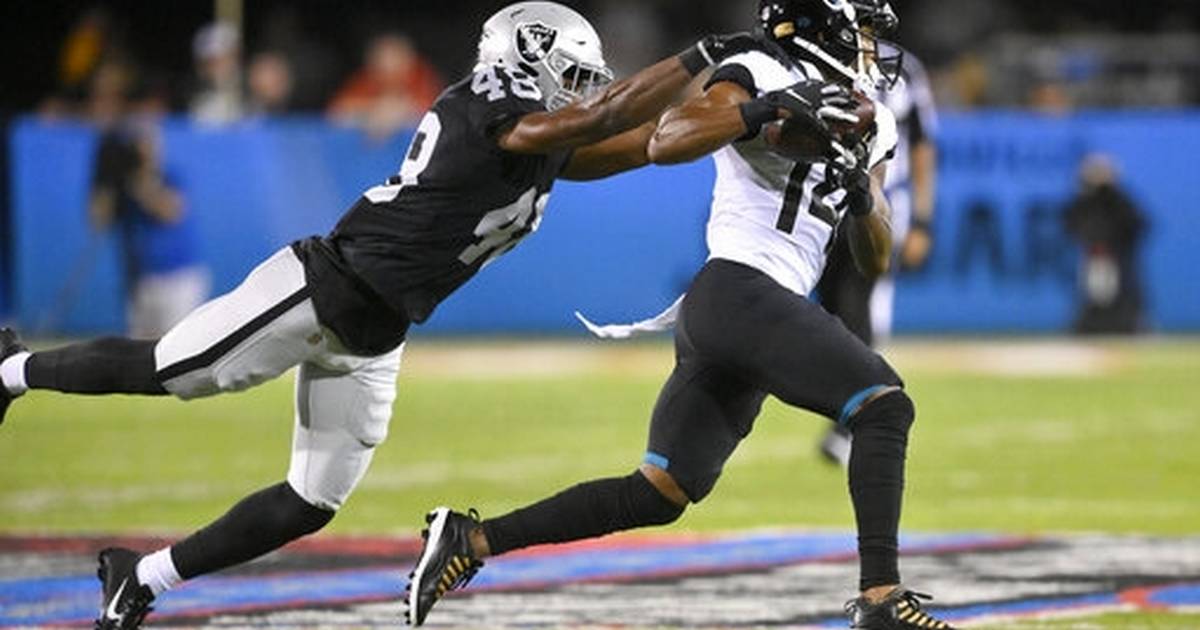 CANTON, Ohio — The Las Vegas Raiders gave coach Josh McDaniels a successful homecoming in his debut on their sideline.

Derek Carr and Davante Adams warmed up but they didn’t get a chance to play their first game together since Fresno State. Carr, the three-time Pro Bowl quarterback, and Adams, the All-Pro receiver acquired in a blockbuster trade with Green Bay, were among many starters who sat out for both teams.

As expected, things got sloppy after the opening kickoff.

The highlight of the game didn’t count. Jacksonville’s Willie Johnson returned a punt 88 yards for a score on the final play of the third quarter but it was nullified by a holding penalty.

McDaniels grew up in this historic football town and played for Canton McKinley High School on this field at Tom Benson Hall of Fame Stadium, known as Fawcett Stadium during his time as varsity quarterback.

He begins his second stint as an NFL head coach after winning six Super Bowls as an assistant under Bill Belichick with the New England Patriots. McDaniels was 11-17 with Denver in 2009-10.

Pederson also begins his second turn as an NFL head coach after sitting out 2021. He guided the Philadelphia Eagles to the franchise’s first Super Bowl victory and three playoff appearances in five seasons from 2016-20.

Pederson has already changed the culture in Jacksonville following a disastrous 2021 season under Urban Meyer, who lasted only 11 months.

He’s tasked with trying to turn one of the league’s worst organizations into a winner. The Jaguars have had one winning season in the last 14 years.

Daniel Carlson connected on field goals of 32 and 55 yards to give the Raiders a 6-0 lead in the first quarter. Ameer Abdullah scored on an 8-yard run in the second quarter and Stidham scrambled 12 yards for a touchdown to make it 20-0 late in the first half.

Down 27-3, the Jaguars found the end zone when Kyle Sloter tossed a 5-yard TD pass to Nathan Cottrell late in the fourth quarter. Cottrell ran up the middle for the 2-point conversion.

Stidham withstood a late hit from Walker and connected with Keelan Cole for 31 yards on the opening play. He was 8 of 15 for 96 yards.

White, the team’s fourth-round pick, had 52 yards on 11 carries, including a 14-yard run on his first touch. Jacobs ran for 30 yards on five carries. Walter had 49 yards on eight carries and an 8-yard TD.

Tony Boselli, the first pick in Jaguars history and the franchise’s first Hall of Fame selection, received a loud ovation when he was introduced with the Class of 2022 inductees. Boselli was a five-time Pro Bowl selection and three-time All-Pro left tackle in seven seasons in Jacksonville before injuries ended his career.

Long-time Raiders wide receiver Cliff Branch, who will be inducted into the Hall of Fame posthumously, was represented in pre-game introductions by his sister, Elaine Anderson. Branch was a three-time All-Pro and four-time Pro Bowl pick in a 14-year NFL career, all spent with the Raiders in Oakland and Los Angeles.

Former Raiders defensive end Arden Key got two sacks in his first game for Jacksonville. Key had three sacks in three seasons with the Raiders.