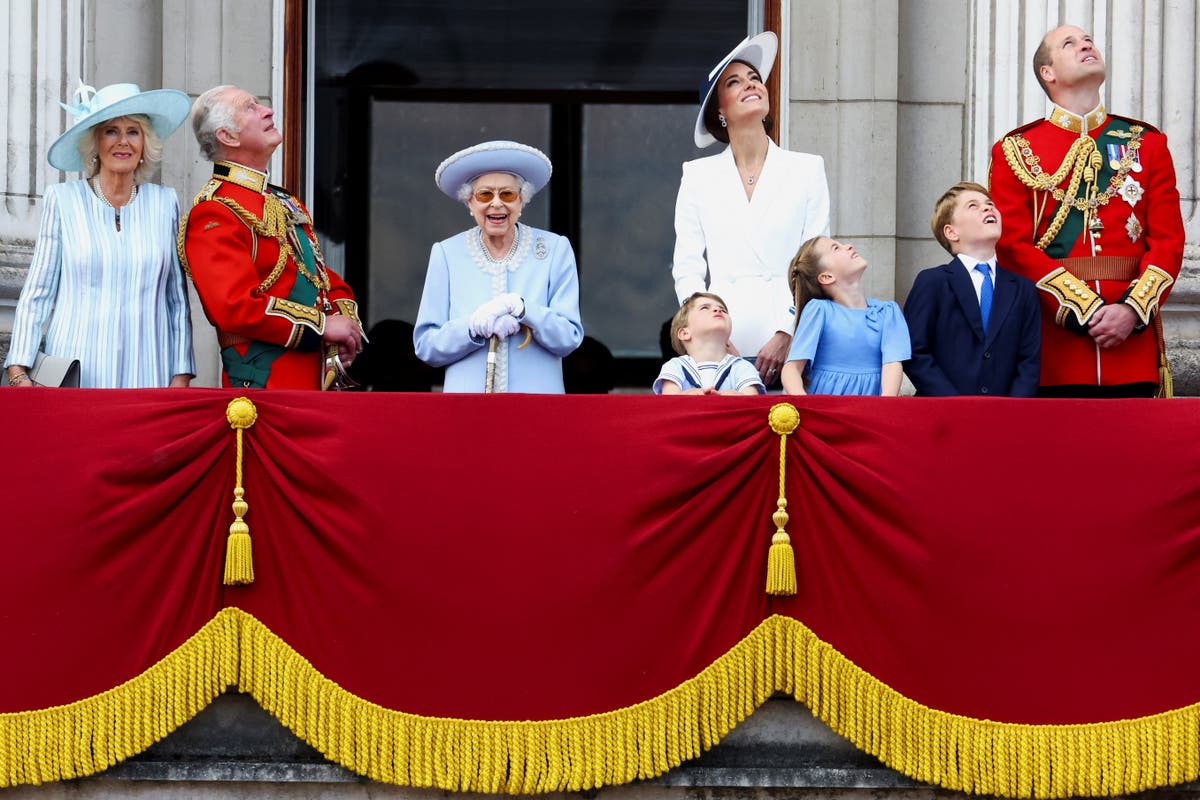 he Queen has appeared on the balcony at Buckingham Palace with other royals to huge cheers from watching crowds.

Her Majesty, 96, was accompanied on her right-hand side by Prince Charles and his wife, Camilla, Duchess of Cornwall.

Prince William and Kate, the Duchess of Cambridge, also witnessed the fly past with their three children, Princes George and Louis and their sister, Princess Charlotte.

Thousands packed the sides of The Mall earlier on Thursday as the monarch made a first appearance alongside her cousin the Duke of Kent, Colonel of the Scots Guards, to take the Trooping the Color salute.

After 70 years of service for the country and Commonwealth, well-wishers are taking to the streets over the extended bank holiday weekend to celebrate the Queen’s Platinum Jubilee.

The once in a lifetime event will see members of the monarchy, celebrities from the UK and across the globe, and people from all parts of the UK gather to recognize the Queen’s legacy.

Trooping the Color began the festivities and saw the Prince of Wales deputize for the Queen, taking the salute and inspecting the troops as the Duke and Duchess of Sussex join the Duchess of Cambridge and other royals to watch the spectacle.

After the ceremony, the Queen acknowledged the salute of the returning Household Cavalry Mounted Regiment from Buckingham Palace’s balcony before joining other working royals on the balcony to watch the traditional fly-past of aircraft.

In the evening, more than 3,000 beacons will be set ablaze across the UK and the Commonwealth in tribute to the Queen, who will lead the lighting of the principal Jubilee beacon in a special ceremony at Windsor Castle that evening.

Ahead of the celebrations, the Queen released a message thanking the nation and saying she continues to be inspired by the goodwill shown to her.

The nation’s longest reigning monarch, 96, said she hoped the Jubilee weekend would provide an opportunity to reflect on the achievements of the last 70 years.

“I know that many happy memories will be created at these festive occasions,” she said.

Storm warning ahead of Jubilee gatherings on Saturday

The Met Office could issue a thunderstorm weather warning for London on Saturday night as crowds are expected to attend the BBC’s Platinum Party at the Palace.

Forecasters are predicting heavy, possibly thundery, showers during performances from the likes of Craig David and Alicia Keys outside Buckingham Palace.

Met Office meteorologist Simon Partridge said: “It’s being monitored but at the moment there’s not enough confidence to issue any warnings, but it’s one that’s going to be reviewed tomorrow morning as to whether or not we do require a thunderstorm warning simply because of the number of people we’re expecting in the capital on Saturday night, so that’s one area of ​​slight concern in terms of weather causing some issues for festivities. ”

Boris Johnson has congratulated the Queen on her Platinum Jubilee.

He wrote on Twitter: “Congratulations to Her Majesty The Queen on your remarkable Platinum Jubilee.

“The whole country, Commonwealth and world thank you for your unwavering duty and service.

President Biden has congratulated the Queen on her Platinum Jubilee in a video message.

“Your Majesty, congratulations on your Platinum Jubilee,” he said.

“For 70 years, you’ve inspired people with your selfless devotion and service to the people of the United Kingdom and the Commonwealth.

“Throughout your reign, the relationship between the United Kingdom and the United States has grown stronger and closer than ever.”

First lady Jill Biden added: “Throughout the years, the joy your visits to the United States have brought Americans, and your solidarity with the American people in times of tragedy, have deepened the friendship and profound connection between our countries.

“Joe and I were so touched by the generosity and welcome you showed to us when we visited you at Windsor Castle last year, during our first visit overseas as President and first lady.”

President Biden continued: “On behalf of the people of the United States, we send you our best wishes to you and the people around the world marking this momentous and historic occasion.”

The first lady concluded: “Congratulations, Your Majesty, and have a wonderful Platinum Jubilee celebration.”

Looking ahead to the Jubilee Beacon ceremony

Following the Trooping the Color and the fly over, the lighting of the Jubilee Beacons will be lit later this evening.

The beacons will be lit at 9.45pm with pipers across the UK performing the ‘Die Regnare’. Beacons will also be lit across the Commonwealth at 9.15pm local time.

The first beacons to be illuminated were in Tonga and the Samoa in the South Pacific, the final one will be in Belize.

Prince William will light the beacon centrepiece at Buckingham Palace on the Queen’s command. This will mark the final event on Thursday – the first day of the Jubilee celebrations.

Pictures from the fly over

Prince Louis grimaces during fly over

Concluding the fly past, the Red Arrows surged across London displaying the colors of the UK.

The jets were preceded by planes flying in a formation displaying the number 70 – the length of the Queen’s reign.

The Queen alongside the Cmabridge children, looked on as waves of RAF aerocraft fly over the Buckingham Palace.

Crowds flock down The Mall to Buckingham Palace

In order to view the Queen and other members of the Royal Family, thousands of eager onlookers have flooded down The Mall.

Ahead of the traditional fly past, the Queen was accompanied by Princes Charles and William from the balcony of Buckingham Palace.

Camilla Duchess fo Cornwall, Kate, the Duchess of Cambridge and Princess Anne also accomapnied Her Majesty alongside other members of the Royal Family.

The King’s Troop Horse Artillery has fired the 82-gun salute from Hyde Park to celebrate the occasion.

The salute followed the Trooping the Color, the first event to mark the jubilee on Thursday.

A salute was also fired from Edinburgh, Gibraltar, Stonehenge, Portsmouth, Stirling and onboard the HMS Prince of Wales, as well as many other locations.