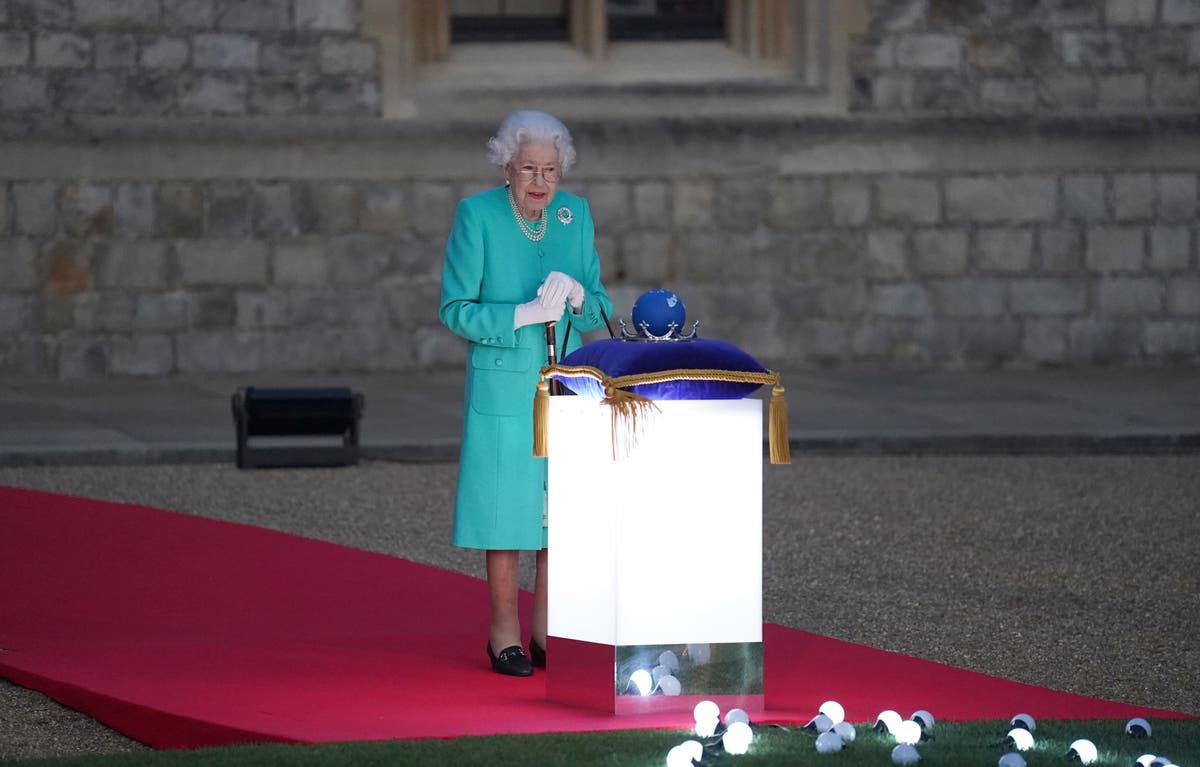 he Queen has symbolically led the lighting of the principal Platinum Jubilee beacon in a spectacular end to the first day of historic national commemorations celebrating her 70-year-reign.

The monarch’s late-night appearance at Windsor Castle rounded off the start to joyful festivities which saw the Queen take to the Buckingham Palace balcony surrounded by her family.

Earlier, the Queen appeared on the balcony at Buckingham Palace with other royals to huge cheers from watching crowds as the Royal Family watched the fly over.

Other beacons will be lit at 9.45pm with pipers across the UK performing the ‘Die Regnare’. Beacons will also be lit across the Commonwealth at 9.15pm local time.

The first beacons to be illuminated were in Tonga and the Samoa in the South Pacific, the final one will be in Belize.

Prince William and Kate, the Duchess of Cambridge, also witnessed the fly past with their three children, Princes George and Louis and their sister, Princess Charlotte.

Thousands packed the sides of The Mall earlier on Thursday as the monarch made a first appearance alongside her cousin the Duke of Kent, Colonel of the Scots Guards, to take the Trooping the Color salute.

After 70 years of service for the country and Commonwealth, well-wishers are taking to the streets over the extended bank holiday weekend to celebrate the Queen’s Platinum Jubilee.

Trooping the Color began the festivities and saw the Prince of Wales deputize for the Queen, taking the salute and inspecting the troops as the Duke and Duchess of Sussex join the Duchess of Cambridge and other royals to watch the spectacle.

Pictured: A Platinum Jubilee beacon is lit in Cardiff Bay

Pictured: Members of the public watch lighting of beacon at Buckingham Palace

Peter McGowran, chief yeoman warder from the Tower of London, carefully placed the Commonwealth of Nations Globe on a stand that glowed purple.

The object – a globe of the world within a crown – has been kept at the tower for safety and other yeoman warders were in attendance.

After touching the symbol of the world, which sat on a cushion, the purple stand turned white and a river of purple lights spread across the Quadrangle and turned white in succession.

The Queen has symbolically led the lighting of the principal Platinum Jubilee beacon in a spectacular end to the first day of historic national commemorations celebrating her 70-year-reign.

The monarch’s late-night appearance at Windsor Castle rounded off the start to joyful festivities which saw the Queen take to the Buckingham Palace balcony surrounded by her family.

Pictured: The ‘tree of trees’ design at Buckingham Palace

The Queen has been presented with the Commonwealth crown made of silver before the lighting of the beacon.

Duke of Cambridge arrives at Buckingham Palace for beacon-lighting

The Duke of Cambridge has arrived at Buckingham Palace to play his part in the dual beacon-lighting ceremony with the Queen, who is at Windsor.

The principal beacon is the 69ft tall Tree of Trees sculpture, featuring 350 British-grown trees, which towers over the palace.

Created by British designer Thomas Heatherwick, the living creation reflects the planting of more than a million jubilee trees as part of the Queen’s Green Canopy (QGC) initiative to mark 70 years of the monarch’s reign.

It will be illuminated with 3,500 festoon lights when the monarch symbolically triggers the ceremony from her Berkshire home.

Australia’s new prime minister, Anthony Albanese, said the sovereign had been a “reassuring constant”, and shared pictures of a beacon lit in her honor.

He tweeted: “This week marks the Queen’s Platinum Jubilee. In her seven decades on the throne, the Queen has been a reassuring constant, projecting calm and strength.

“Tonight, along with 53 other nations, we light a beacon to give thanks to Her Majesty and send our warmest congratulations.”

Watch: Jubilant celebrations across the UK for Platinum Jubilee

Queen ‘experienced some discomfort’ at celebrations

In a statement, Buckingham Palace said the Queen “greatly enjoyed” her birthday parade and flypast in London but “did experience some discomfort”.

The statement said: “Taking into account the journey and activity required to participate in tomorrow’s National Service of Thanksgiving at St Paul’s Cathedral, Her Majesty, with great reluctance, has concluded that she will not attend.”

She is believed to have experienced episodic mobility issues during Thursday’s events.

But she will attend a beacon lighting event at Windsor Castle on Thursday evening, the palace confirmed.

It is understood the decision was considered regrettable but sensible due to the length of the journey and time involved and the physical demands the service would require.