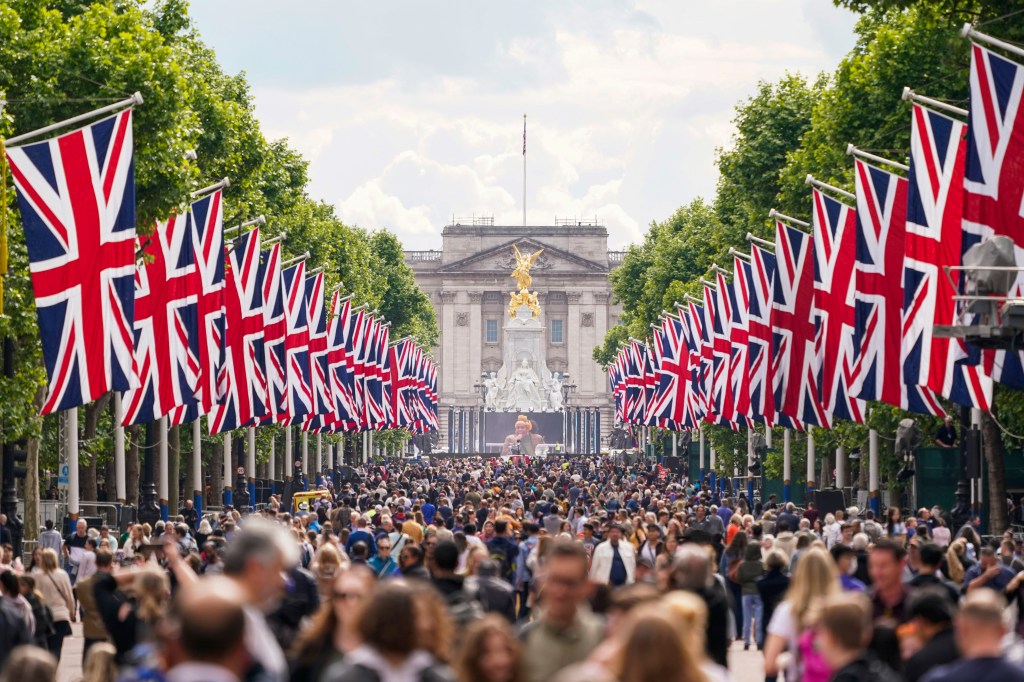 Refresh for latest…: Queen Elizabeth II’s Platinum Jubilee celebrations are under way this morning in London with the annual Trooping the Color parade from Buckingham Palace to Horse Guard’s Parade to celebrate the monarch’s Official Birthday. More than 1,400 soldiers, 200 horses and 400 musicians are taking part.

Eyes will be on the iconic balcony at Buckingham Palace where the queen and 17 other members of the Royal Family are due to appear after Trooping the Color. Only “working” royals and their children will be there, which excludes the Queen’s son Prince Andrew, and her grandson Prince Harry, and his wife Meghan, the Duchess of Sussex. Andrew stepped down in the wake of a sex assault civil court case in the US while Harry and Meghan have withdrawn from their royal roles and now live in the States.

However Harry and Meghan, with their children, will reportedly be at the event today, watching the parade from the Major General’s Office, which overlooks the grounds. It is not known what other celebrations they will attend.

A spokesperson for the couple previously said, “Prince Harry and Meghan, the Duke and Duchess of Sussex are excited and honored to attend the Queen’s Platinum Jubilee celebrations this June with their children.”

In the UK, the BBC is showcasing the events while ABC News is covering for the US Good Morning America has featured special coverage all week and will broadcast special editions live from London. French news television is also covering with various other programming spread across other channels.

In total, there are four days’ worth of events featuring such stars as Diana Ross, Queen and Adam Lambert, a pre-recorded set from Elton John; and presenters including David Attenborough, David Beckham and Julie Andrews.

Britons will be enjoying additional day’s holiday from today to Sunday, while huge street parties planned across the UK.

Buckingham Palace released a message from the queen this morning:

“I continue to be inspired by the goodwill shown to me, and hope that the coming days will provide an opportunity to reflect on all that has been achieved during the last seventy years.”

A message from The Queen at the start of the #PlatinumJubilee celebrations:

The Duke and Duchess of Cambridge this morning tweeted their excitement:

– The Duke and Duchess of Cambridge (@KensingtonRoyal) June 2, 2022

To mark the beginning of the celebration weekend, a new portrait of The Queen has been released:

Her Majesty The Queen, the first Monarch in British history to celebrate a Platinum Jubilee.

To mark the beginning of the #PlatinumJubilee Celebration Weekend, a new portrait of The Queen has been released.

I want to pay tribute to Her Majesty for the incredible dedication, grace and steadfastness she has shown during 70 years of extraordinary public service.

Long may she reign. #PlatinumJubilee pic.twitter.com/jrbfrGvyTR