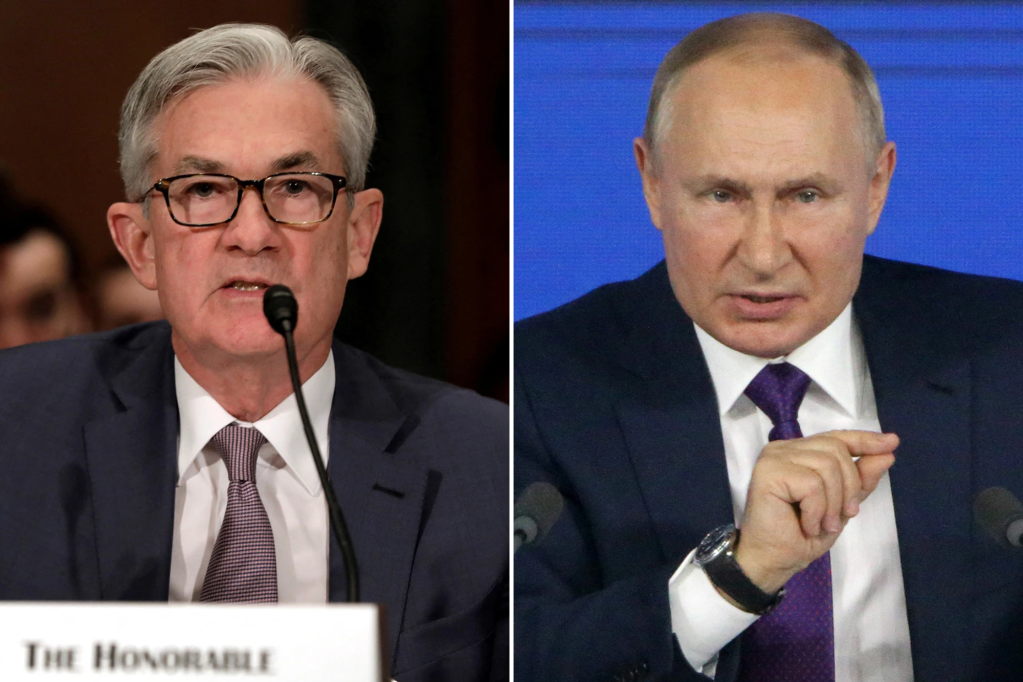 It’s tempting to think that Fed Chairman Jerome Powell deserves the pickle he’s in: He ignored inflation as “transitory” when it wasn’t. Now – after one of the biggest policy blunders in recent Fed history – he needs to raise interest rates, maybe significantly.

But the timing could not be worse: A necessary and significant rate rise would come amid global instability sparked by Russia’s invasion of Ukraine, and slowing the US economy could only strengthen Vladimir Putin’s hand.

Unfortunately, there’s no easy way out for Powell and the Fed, and you can bet he and his advisers are squirming over what to do. Nevertheless, do not rejoice over Powell’s pain; it may be his fault and eventually he may be vilified for it, but it’s the American people who will be paying the price.

That price, of course, is all the bad choices that Powell has to choose from, including doing little or nothing with rate increases that will result in more ripping inflation and a massive tax increase on the working class. Or Powell could channel his inner hawk and possibly spark a recession because he waited too long to do his job.

Putin is smart enough to have figured in the Powell Pickle in his calculations for invading Ukraine. Sure, President Biden’s weakness is well known and top-of-mind for the Russian dictator who watched (as we all did) Biden’s bumbling withdrawal from Afghanistan, and the daily chaos at our borders.

Biden’s weird fixation to appease the progressive left of his party has made Russia rich, and Putin sees that one as well. Listening the AOC types, Biden has reduced oil production so much that Europe is retained to Russian energy supplies.

All that is catnip for an autocrat looking to expand his empire, but there’s more. Putin’s kleptocracy has made him one of the world’s richest men, bankers tell me, citing his net worth of $ 100 billion or more. Neither he nor his oligarch pals are too concerned about Biden’s sanctions that oddly exclude restricting Russian use of the SWIFT interbank clearing system, meaning the bad guys can still move money around when needed.

What seals the deal for Putin in his goals for European domination is the precarious state of the US economy. Despite some decent headline numbers (GDP growth and a low unemployment rate) the Fed botching the inflation threat has weakened the US at the worst possible time.

The Fed has a dual mandate of using monetary policy (adjusting short-term interest rates and regulating the money supply through bond purchases or sales) to foster economic expansion and what’s known as “stable prices,” aka low inflation.

There’s good reason the Fed has traditionally put price stability above everything else: What good are higher wages for working-class people if they get eaten away by high food and energy costs and just about anything it takes to get through the day?

For nearly two years, Powell has simply ignored the second part of his mandate. It began with necessary and historic money printing during the pandemic to keep the markets functioning and the economy from collapsing.

But Powell did not stop there. He kept printing money and even applauded Biden’s progressive spending measures that discouraged work and allowed inflation to surge. He did this when it was so obvious inflation was not transitory and could not be explained away by fixing the “supply chain.”

More recently, Powell has been looking to put the genius in back in the bottle because inflation turned out to be a real, long-lasting problem. He’s tapering his money printing and signaling rate increases and squeezing money from the economy and markets in March. But they’re scheduled to arrive after Putin’s tanks entered Kyiv and he’s ready to annex one of the largest nations in Europe.

Get the latest updates in the Russia-Ukraine conflict with the Post’s live coverage.

The instability is frightening for investors, who accounted for the massive volatility in all the major indices last week. A nightmare scenario of stagflation – high inflation because of a spike in oil and a recession because of higher rates needed to tamp down inflation – was now in the cards.

Almost on schedule came a leak on Thursday, after the Dow was down some 800 points, that the Fed may back off the severity of the rate hikes at least until the Russia mess is over and markets stabilize.

On cue, the Dow recovered, making up all its lost ground and finishing the day up nearly 100 points. Behind the scenes, big investors reckoned the Fed can now back off significant rate hikes because Biden’s sanctions were pretty weak; oil prices will not soar because Russia can keep producing.

Since oil and thus gas prices are a component of the inflation gauge known as the Consumer Price Index, inflation may look good on paper during the next CPI print in March, allowing Powell to back off the significant rate increases.

So the good times are here to stay? Not so fast. Powell has underestimated inflation for most of the year. With the US ratcheting back on oil production, why should oil prices fall back down to a more manageable $ 75 a barrel from their current levels above $ 90? That means he may have no choice but to flirt with an economic slowdown since history shows runaway inflation is almost always a harbinger of civil unrest.

The question many investors have: Is Powell’s legacy more imperiled by the inflation threat, or causing a recession? I do not know but Putin does not care, which is why his tanks are in Kyiv as you read this.