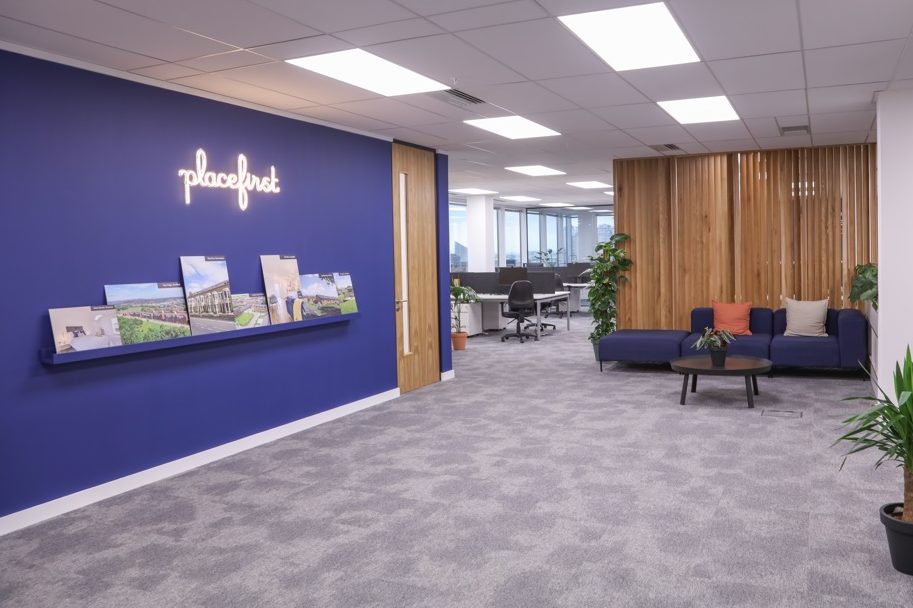 Build to rent provider Placefirst has expanded into a new head office, following a year of record growth.

Located in Exchange Quay, the 4,100 sq ft space has been fully redesigned to create a fresh, flexible and collaborative environment for employees.

Placefirst worked with Braithwaite Group to complete the fit-out for the new office, which includes multiple new meeting rooms with new technology, a high spec kitchen, and bespoke meeting pods.

The in-house team also collaborated with NoChintz to bring the new brand to life in the interior design, focusing on the overall styling and communal zones.

The office comprises a core open plan layout of fixed desks, various breakout areas and hot desking to encourage collaborative and flexible working, as well as a range of private meeting rooms. The kitchen is on brand with the spec that is installed in all Placefirst homes, and a bespoke navy sofa that was handmade in Manchester sits in the entrance area.

Placefirst has recently hit a milestone of 1,500 homes with a projection of reaching 6,500 by 2026. Key projects include the recently completed ‘Elevate’, an £8m apartment scheme in Manchester which was 85% pre-let, and developments at ‘Skye Edge’ in Sheffield and ‘Scholars View’ in Hetton-le-Hole, both of which will complete this summer.

Placefirst chief executive, David Mawson, said: “This is an incredibly exciting time for the business following a year of record growth. We’re proud to have expanded into our brand new office to support our teams.”

Construction expert Intelligent FS has invested £1m into a new contemporary office space in Hale and a tripling of its day-to-day workforce.

Intelligent FS makes the move from its former headquarters in Macclesfield in a major outlay for the firm, which is involved in transformative cladding work across the United Kingdom.

With more than 60 years of experience in the building service industry, Intelligent FS led on two recent projects for the Ministry of Justice, installing new cladding in both Burnley Combined Court and Dudley Magistrates Court in work valued at a combined £1m.

Intelligent FS says it is unique in employing a boutique cladding team to tackle the UK cladding crisis following the Grenfell Tower tragedy in 2017, with the company willing to retroactively work with developers to fit safe cladding on buildings.

Executive director, Rob Williams, said: “Our team worked at an incredible pace during the pandemic, in challenging conditions, as large parts of the economy shut down.

“Because of this, Intelligent FS were able to scale up its operations and we needed an office space to accurately reflect the varying strands of our business as we made the decision to triple our staff force.

“We invested heavily in construction, health and safety and marketing to cement our position as a leader in the construction and cladding industry as we aim to make buildings better and safer for everyone.”

Rula Developments has secured two new occupiers at Winsford Gateway, a significant development and employment site at junction 18 of the M6.

The news follows Rula’s appointment to deliver a major expansion plan for the industrial-led site on behalf of Build&Thrive, the partnership between Cheshire West & Chester Council and PSP.

Petrol filling station operator, The Kay Group, has acquired a 1.6-acre roadside plot at the entrance to Winsford Gateway. Rula is delivering a facility to include four BP pumps with EV charging points and bespoke HGV facilities to serve the industrial estate operators. The new retail operation will be supplied by Londis and includes a Subway, Greggs, and Costa Express amenity to customers. A car valet service will also be available.

Paul Blackmore, of The Kay Group, said: “We are pleased to secure this prime site which strategically fits into our geographical structure. This will be our 10th operation in the UK with three further sites in the pipeline. We expect to create around 40 highly paid jobs on the site to include seven management positions.”

Rula has also secured a deal with self-storage operator, Rent A Space, which is taking 60,000 sq ft of space at Winsford Gateway. Rula will deliver a turnkey solution for Rent A Space.

Kevin Murphy, director at Rent A Space, said: “Our vision is to create a multi-use destination offering start up trade units, light assembly and small office and workspace each on flexible, cost effective and easy in/out terms. This in turn will be underpinned by a large presence of business and household internal self-storage units.

“With state-of-the-art technology and a multitude of green initiatives, the total scheme value will be in excess of £5m, boast 60,000 sq ft of internal space and will create plenty of opportunities for job creation.”

Rula has already delivered a 168,000 sq ft, £22m factory for Tiger Trailers on the estate. With full planning consent in place to develop a further 30 acres, Rula has released plots for 18.5 acres industrial/distribution use, five acres for roadside/amenities and a further seven acres for smaller industrial/business uses.

Ben Ward, managing director at Rula Developments, said: “Having just completed works on a new main access road and site infrastructure we can now offer bespoke design and building opportunities for units from 20,000 sq ft to 60,000 sq ft for the amenity and business unit plots and up to 250,000 sq ft for industrial distribution.”

Kate Howe, development director at PSP, said: “The agility and flexibility of the Build&Thrive partnership with the Cheshire West & Chester Council allows us to respond to the specific needs of a community and to deliver projects that truly support and promote local people and places . As a partner and consultant to local authorities and housing associations, we passionately believe land and property can be used to help local unlock value and deliver true social impact.”

Yorkshire-based Rula Developments is a privately-owned commercial development company focusing on identifying and developing sites across the UK for immediate development or for medium to longer term strategic development, delivering high quality buildings and schemes.

Elan Homes has acquired its fourth new homes site in Lancashire with work now under way in Goosnargh to redevelop land that was formerly part of the grounds of a hospital.

The company has acquired a 3.35 acre site along Henry Littler Way – part of the former Whittingham Hospital, which closed in 1995 and is being redeveloped to provide hundreds of homes – under the stewardship of the landowner, Homes England.

Philip Palmer, land director for Elan Homes in the North, said: “The land we’re developing forms part of a much larger scheme to redevelop the former hospital site and deliver much needed new homes as identified by Preston City Council’s adopted Local Plan. Homes England had a specific agenda to target SME developers like Elan for parts of the scheme and our offer was successful following a competitive land bid process.”

Elan’s plans for 21 homes, offering a mix of three- and four-bedroom semi-detached and detached designs, set amongst the established landscaped setting, have been approved by planners.

Groundworks have taken place and construction of the homes is due to start this summer.

Elan already has other developments in Lancashire. Wrea Green Meadows, off Bryning Lane, was the first development launched in the county by Elan as part of an expansion plan which has seen the independent housebuilder commit to providing quality homes in sought-after locations across Lancashire.

At nearby Redwood Gardens, a new development located between Lytham St Annes and Blackpool, a collection of three- and four-bedroom homes, is also being created by Elan, while the company has also been named as the preferred developer to deliver 76 new homes in Lower Darwen, Blackburn.

At Goosnargh, along with the new family homes, Elan will create a wildflower meadow, helping to create homes for nature and an outdoor space residents can enjoy, set amongst an ecological bat house, seeking to improve the biodiversity credentials of the new neighbourhood.

Marie Morris, sales director for Elan Homes in the North, said: “Our new development in Goosnargh is a further indication of our commitment to Lancashire. It will be a really special place to live, with a wealth of features on its doorstep.”

Homes at the Elan development are expected to be marketed later this year.

Salford is set to benefit from almost £10m of brownfield development funding.

On Friday, July 29, the Greater Manchester Combined Authority (GMCA) approved the allocation of £27m of tranche three funding to be split across local authorities in Greater Manchester. On top of this is £9.6m of underspend which has also been redistributed.

A total of 31 brownfield sites across Greater Manchester were successful from 147 nominations. The sites identified for development were assessed by officers on their viability and how they support the principles of the Greater Manchester Strategy.

In Salford five sites were successful in taking up a quarter of the share of the funding to provide 620 homes. This equates to just short of £10m of funding awarded to Salford.

Salford City Mayor, Paul Dennett, GMCA Deputy Mayor and portfolio holder for homelessness, healthy lives and quality care, said: “Bringing forward the most sustainable brownfield land for development is the approach we are taking in Greater Manchester and this decision once again supports that .

“The aim is that brownfield land – which is land that has been used before and is disused or derelict – is much better to develop on than a green field site that has never had development on it. This is something that is backed by all local authorities in Greater Manchester.

“Green space is vital as we work to be carbon free in Greater Manchester by 2038. Green land is cheaper to develop on so this important funding will be used to unlock brownfield land ready for development.”