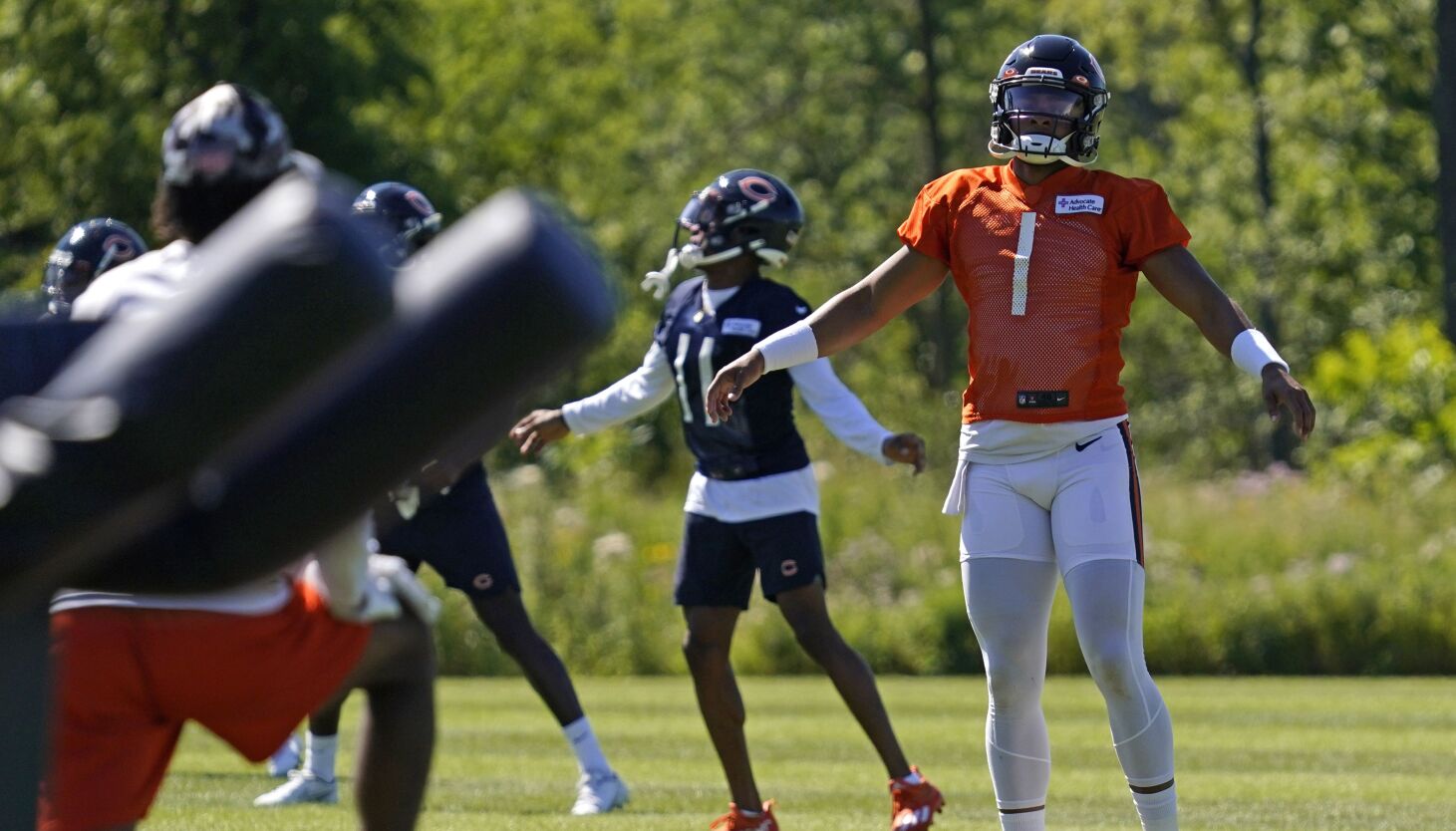 This one was hard.

When we did this exercise at the start of training camp last year, there were more than 40 players on the Bears practically guaranteed to make the team’s final 53-man roster. This year, you’d be lucky to find 30.

That’s what happened when the Bears decided to reboot, axing players who had the resume, guaranteed money or draft status to mandate a roster spot. The result of that blood-letting: a 2022 team that, early in training camp, doesn’t profile as dangerous, deep or expensive.

Here’s a look at the Bears’ 90-man roster— and predictions for who makes the final 53-man lineup on Aug. 30:

On the bubble: Nathan Peterman

Battle to watch: There’s not really one — and that’s what puts Justin Fields in a much better position than last year, when he was the second-stringer.

He said it: “[Fields] is ‘so natural-born leader type of guy. So we’re lucky to have a guy like that leading this thing.” — offensive coordinator Luke Getsy

On the bubble: De’Montre Tuggle

Battle to watch: How the Bears divide up the workload between Montgomery and backup Herbert. Last year, Getsy’s Packers gifted starter Aaron Jones 11.4 rushes per game and backup AJ Dillon 11.

The big number: 4.41 — Yards per carry that Herbert averaged during the four games Montgomery was injured.

He said it: “He’s quick and shifty. He’s going to help us a lot.” — Montgomery, on Ebner

Battle to watch: The Bears vs. every available receiver in the league. The guess here is the Bears add sign at least two wideouts by Week 1.

The big number: 2 — Catches by Newsome last year. He’s one of two returning Bears receivers who caught a pass for the team in 2021.

He said it: “If it’s to prove they can play [or] proving they can sustain success over multiple years, I think everyone has a chip on their shoulder to prove that they are that guy. We’ll see.” — Poles on the receivers

Battle to watch: Kmet vs. expectations. Kmet made a jump last year, but needs another one. With journeymen behind him, he’s one of a handful of players the Bears can at least afford to lose.

He said it: “When we get in the red zone, [Kmet] is gonna be somebody that we’re gonna lean on, for sure.” — Offensive coordinator Luke Getsy

Battle to watch: Reiff and Schofield vs. Father Time. It’s a bad sign that both veterans, signed on the eve of camp, are favorites to start. It’s an even worse one that Patrick broke his thumb during the second practice.

The big number: 83 — Pro Football Focus’ free-agent ranking of Reiff, one spot ahead of former Bears tackle Germain Ifedi. The site predicted that “franchises with a disastrous situation to tackle may turn to him late in the process to plug a hole.” Bingo.

He said it: “[The Bears’ young tackles] are athletic. Real athletic. They’re going to become seasoned. Obviously, it takes time, especially nowadays in the NFL with pass rushers.” — Reiff

Battle to watch: Quinn vs. the trade market. One year after setting the franchise’s single-season sack record, Quinn is a rare veteran the Bears haven’t moved — yet.

He said it: “It’s good to have him back and be in the same environment as him.” — Gipson on Quinn, who skipped practices in the spring.

Battle to watch: Smith vs. Poles. Both sides have remained respectful in a contract extension standoff that has kept Smith away from practice for the first week of camp. The closer it stretches towards the regular season, though, the more disruptive it becomes.

The big number: $98.5 million — That’s how much Shaquille Leonard got on a five-year deal last season — a number that Smith will try to top.

He said it: “He’s the heart and soul of the defence. His presence is always missed when he’s not there.” — Safety Eddie Jackson, on Smith

Battle to watch: Where will Gordon play? The rookie’s ability to toggle between outside cornerback and the nickelback spot gives the Bears flexibility to compare players across roles. That means Vildor, Graham and Young are competing against each other.

The big number: 103.3 — The passer rating the Bears defense allowed last season, the highest in the NFL.

Battle to watch: Can Cruikshank catch up? The veteran, who missed OTAs and began training camp on the Non-Football Injury List, can be a special teams weapon for the Bears. He played on 83 percent of the Titans’ kicking downs in 2019 and 51 percent last year.

Battle to watch: Gill could kick off instead of Santos.

He said it: “It can change minute to minute, quarter to quarter. So you just have to be on top of those situations and it just changes.” — Special teams coordinator Richard Hightower, on Soldier Field weather