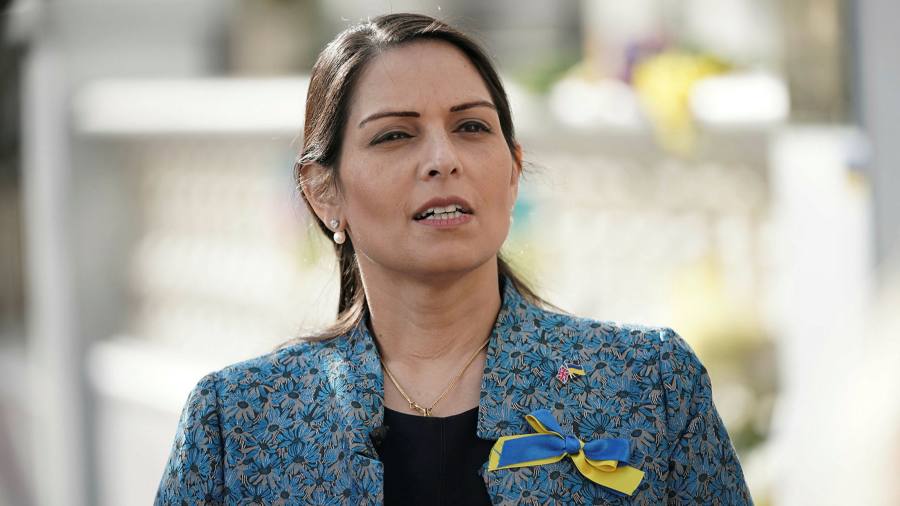 UK home secretary Priti Patel apologized on Friday for “frustrating” delays in the processing of visas for tens of thousands of Ukrainians seeking refuge in the UK since the Russian invasion of their country in February.

Just over half of the 79,800 Ukrainians who have applied through the two UK schemes open to them have received visas, according to the latest Home Office data published on Friday.

Unlike the EU, which has thrown open its borders to refugees, the British government initially envisaged only allowing in those Ukrainians with extended family members already resident in the UK. But after widespread public outcry, it created a second scheme dubbed “Homes For Ukraine”.

This additional path to a visa encourages members of the British public and organizations to find Ukrainian refugees wanting to reach the UK and volunteer to house them for at least six months.

The family scheme has issued 28,500 visas but only 10,800 refugees have arrived in the UK. For the Homes For Ukraine scheme the number of arrivals is under 10 per cent with just 1,200 people of the 12,500 who have received visas arriving in the country.

“I’ll be very candid, it has taken time. Any new scheme takes time, any new visa system takes time, ”Patel said in an interview broadcast on the BBC. “It’s been frustrating,” she said. “I apologize, with frustration, myself.”

Lord Richard Harrington, the refugees minister, said last week that the government aimed to increase processing to 15,000 visas a week. But with more than 200,000 members of the British public signed up to host Ukrainian refugees, the Home Office remains way off target.

Patel added that she was “streamlining the process” and there would soon be a “change in numbers”.

Her pledge was met with skepticism by Rend Platings, a British Iraqi businesswoman resident in Cambridge, one of the sponsors, who helped a Ukrainian friend, Kristina Corniuk, apply for a visa on the first day the Homes for Ukraine scheme was launched on March 18 .

Apart from an acknowledgment for the application and an inquiry relating to a criminal-background check, neither Platings nor her friend, who is stuck somewhere near the Polish border, have heard anything further.

Platings is now on the eighth day of a hunger strike in protest at the delays. She said there had been obvious technical glitches with the schemes, and some of those granted visas had not received them. These should be reissued, she suggested.

“That would mean having to admit they have made a mistake. But it would make a huge amount of difference to people who are waiting with bombs going off all around them and who are in fear for their lives in Ukraine, ”she said.

Almost 4.4mn Ukrainians have fled their country, according to the UNHCR, mainly through Poland where more than 2.5mn have arrived. Some have continued to other EU states, such has Germany, which has so far taken in more than 300,000, according to local media.