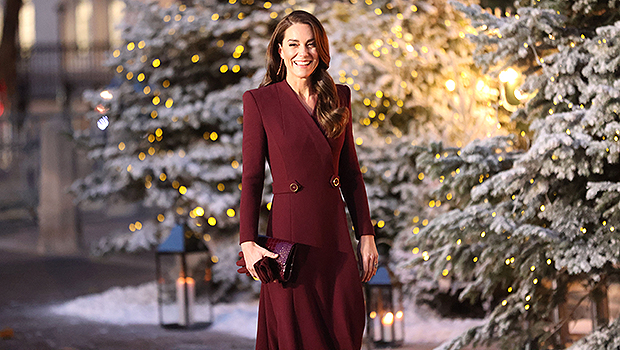 Together at Christmas indeed. Princess Kate Middleton, 40, made sure the late Queen Elizabeth II, who died on Sept 8, was together with the Royal Family in spirit at her holiday concert on Thursday, December 15. In two photos posted by the Prince and Princess of Wales to Twitter on the same day, a tree was shown decorated with sweet Paddington Bear ornaments for Kate’s Royal Carols: Together at Christmas special. A third pic showed the iconic venue of the concert, Westminster Abbey. “Getting ready to welcome our #TogetherAtChristmas guests, celebrating those who have gone above and beyond in their communities and paying tribute to Her Late Majesty The Queen,” Kate and her husband Prince William, 40, captioned the photos.

Getting ready to welcome our #TogetherAtChristmas guests, celebrating those who have gone above and beyond in their communities and paying tribute to Her Late Majesty The Queen pic.twitter.com/AdEzxFxPfQ

— The Prince and Princess of Wales (@KensingtonRoyal) December 15, 2022

It was a fitting and touching tribute. The late Monarch and the beloved children’s book character were closely linked during her life. During her historic Platinum Jubilee concert in June, she made a heartwarming surprise appearance in a hilarious sketch in which she sat down for tea with Paddington and revealed the contents of her purse.  “Happy Jubilee, ma’am,” the little bear said during the sketch. “And thank you for everything.” After her death, mourners reportedly left stuffed Paddington bears, which were then donated to children at surrounding hospitals.

Hundreds of the royal couples’ 2.7 million followers on the platform took to the comments section to react to the sweet gesture in memory of Her Majesty. “Such a wonderful and joyous celebration of Christmas, inspirational people and of course, honouring our beloved late Queen Elizabeth,” wrote one. “Such a lovely touch to have Paddington ‘included,’” remarked another. “Her late Majesty’s little scene with the Peruvian bear brought such joy, and continues to do so. A very sweet link and ‘thank you’. I hope all attending today’s event have a lovely time.”

Others noted the poignant nature of the first Christmas following Queen Elizabeth’s passing at age 96, after 70 years on the throne. “It will be beautiful!” reacted a follower. “I loved last year’s and I really hope this stays as a royal tradition. I know it will be a poignant one after the passing of The Queen x much love to you all x.”


The top robo-advisor offerings for 2022