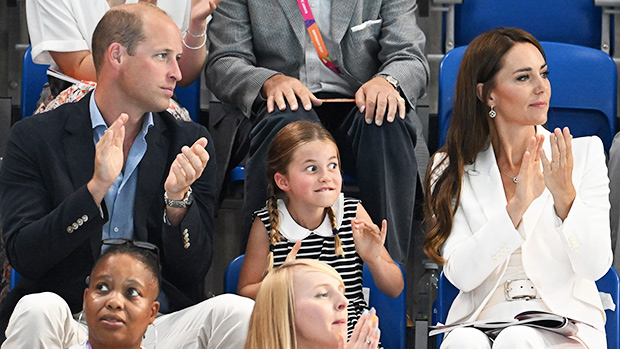 Prince William spirit Kate Middleton‘s 7-year-old daughter Princess Charlotte had lots of fun with her parents on Aug. 2 in the audience of the Commonwealth Games. Charlotte watched a swim meet in Birmingham, England and provided plenty of entertainment with a wide range of funny faces. Charlotte’s animated facial expressions were perfectly in line with her mood throughout the match and that made her so relatable.

At times, Charlotte was happy watching the swim meet and her face definitely didn’t hide that. The adorable royal smiled, gasped, and stuck her tongue out while she clapped and cheered from the audience. She even stood up from the chair between her 40-year-old parents and turned to William and gave him a big thumbs up!

But Charlotte wasn’t overly thrilled entirely game. At one point, she put on a big frown as she watched something that was disappointing to her happen during the swim meet. Overall, Charlotte was mostly cheerful in the stands. She looked so cute in a black and white striped dress with a white collar and had her hair styled in side braids.

Prince William & Kate Middleton’s Family: Photos Of The Royals & Their Kids At The Platinum Jubilee & More

Charlotte isn’t the only young member of the royal family who has been super animated at public events. Here little brother Prince Louis4, made funny faces at Queen Elizabeth‘s Platinum Jubilee Pageant in June. He joked around with Kate and even covered her mouth at one point, as the doting mother did her best to keep her youngest child’s energy contained.

Prince George, 9, also put on his fair share of goofy faces at Wimbledon in July. He sat between his parents and was focused more on making his own fun rather than watching the match between Novak Djokovic spirit Nick Kyrgios. William and Kate really have raised three adorable children who all have giant personalities of their own!