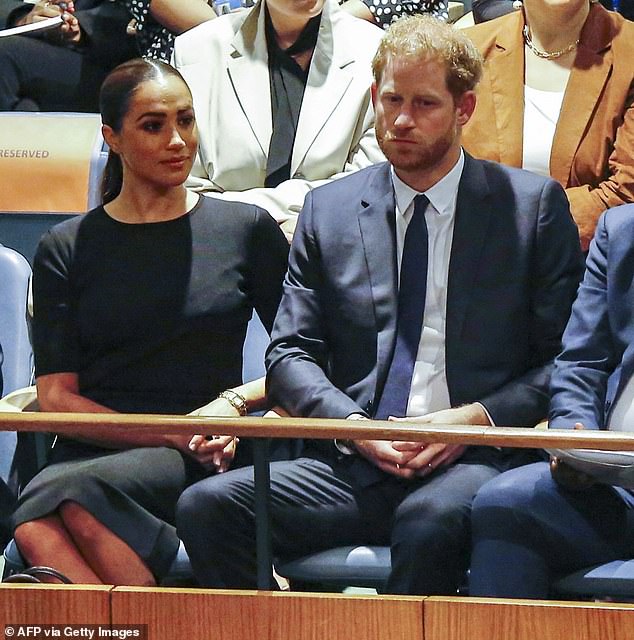 Prince Harry and Meghan Markle won’t be visiting the Queen when she takes her summer break at Balmoral despite an invite, it is claimed.

Her Majesty reportedly asked the couple and their two children, three-year-old Archie and Lilibet, one, to stay at her Scottish residence and told royal staff to prepare.

It was said that the Sussexes would not have to spend time with other royals such as Charles and William.

However the couple, who last went to Balmoral in 2018, are said not to be planning to attend the Scottish Highlands estate over the next few months.

A Balmoral insider told The Sun and Page Six: ‘Staff have been told to expect the full list of royals including Harry, Meghan and their children.

‘They are preparing for the Sussexes.’

Another source is reported to have said: ‘I would be stunned if they did turn up.’

It is understood the couple are planning to stay in the United States before the release of Harry’s memoir.

PageSix reports that Harry, 37, and Meghan, 40, are not expected to join the Queen because they have not been invited.

Harry last saw his Grandmother during her Platinum Jubilee, where he reportedly only had around 15 minutes with her.

The Queen was seen in Scotland last week, and will spend the months of August and September at her highland retreat, where she will be joined by other family members, including William, Kate and their kids, Prince George, nine, Princess Charlotte, seven , and Prince Louis, four.

Balmoral has had a number of adaptations in recent years, including her Craigowan Lodge, which was fitted with a wheelchair-friendly lift in 2021.

The castle was bought for Queen Victoria by Prince Albert in 1852 for £32,000, and it has been the Scottish home of the royal family since. She usually arrives at the estate in mid-July.

Princess Eugenie previously told how Balmoral was ‘the most beautiful place on earth’.

She said on an ITV documentary Our Queen at Ninety in 2016: ‘I think Granny is happiest there.

‘She really, really loves the Highlands – walks, picnics, dogs, a lot of dogs, and people coming in and out all the time.’

Representatives for the Sussexes have been approached for comment.

News of the Sussex’s potential visit comes just a week after the author of a new royal biography made bombshell claims about the Duchess of Sussex.

Tom Bower, author of a new insider’s account of the royal couple titled Revenge: Meghan, Harry and the war between the Windsors, said the Duchess ‘thought the royal family would be like Hollywood.’

Speaking to Ben Shephard and Charlotte Hawkins on Good Morning Britain he claimed that once Meghan realized the royal family was ‘lots of work and little reward’, she didn’t like it anymore.

The author said: ‘It’s wrong to say she was a famous actress, she wasn’t, she was a third rate actress, Suits was only watched by a million people.’

During the interview, the author admitted that many of his sources were people who don’t like Meghan because she’d warned her nearest and dearest not to speak to him.

Tom Bower, author of a new insider’s account of the royal couple titled Revenge: Meghan, Harry and the war between the Windsors, said the Duchess of Sussex ‘thought the royal family would be like Hollywood’ (pictured, announcing their engagement in 2017)

Host Ben said to Tom: ‘She was a very famous actress. She had a high profile in Hollywood and Suits is a series that was streamed all over the world, so people knew who she was.’

Tom disagreed with the host, referring to Meghan’s cover story with Vanity Fair while she was dating Prince Harry.

‘Well we won’t argue but I disagree with you,’ he said. ‘The point is, until she met Harry, even Graydon Carter the editor of Vanity Fair who commissioned the article never heard of her and never heard of Suits.

‘He was just told that anyone who marries Harry is going to be famous and she indeed was.’

During the interview, the author admitted that many of his sources were people who don’t like Meghan because she’d warned her nearest and dearest her not to speak to him

‘She said to her father “I want to be famous, I want to walk down the red carpet” and by marrying Harry she achieved exactly that ambition.’

The biographer went on to say he believes the royal family tried very hard to accommodate Meghan and include her in the family.

He claimed: ‘People were very excited by the fact that there was a mixed race girl coming’, adding: ‘It was going to be a great development for the royal family.’

However, he said ‘it went wrong’ and why it went wrong he said he has ‘explained fully’ in his new book.