Prayers for Damar Hamlin show bond between football and faith 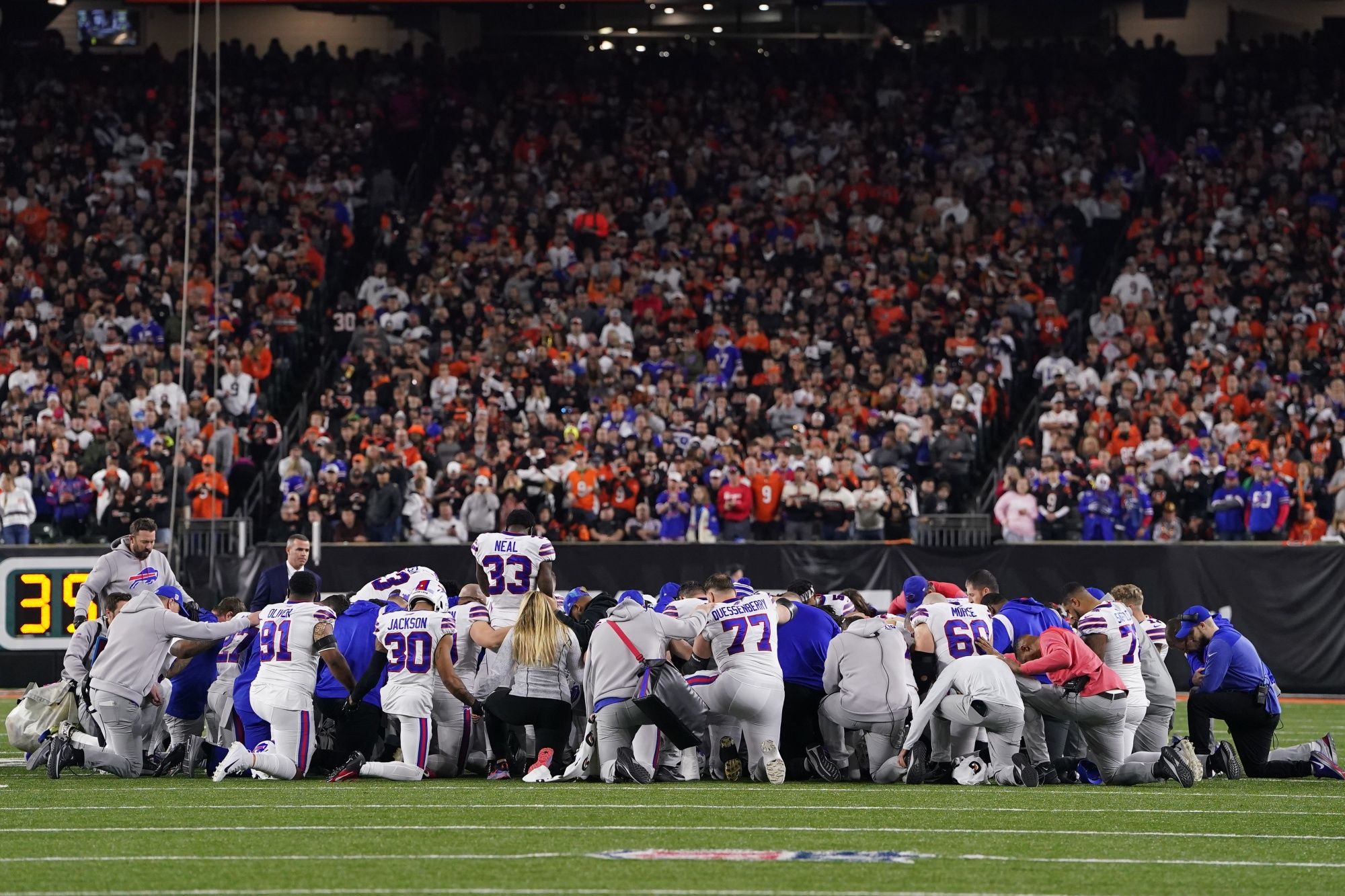 As the ambulance carrying injured Buffalo Bills player Damar Hamlin rolled slowly off the field in Cincinnati on Monday night, a huddle of players and team staff knelt in a massive yet intimate circle on the field. They bowed their heads, some placing hands on each other’s shoulders and others with tears streaming down their faces, in a moment of spontaneous prayer led by the team’s chaplain, Len Vanden Bos. The hushed crowd at Paycor Stadium burst into applause as the players knelt and again as they rose.

It was the first of many prayers in an extraordinary display of public piety that has unfurled across the country in the hours and days after Hamlin’s collapse after what looked like a routine collision early in the game. Hamlin suffered cardiac arrest on the field and was in critical condition as of Wednesday night at University of Cincinnati Medical Center. The team said he was showing signs of improvement.

The invocations on behalf of the 24-year-old have gone beyond the pro forma “thoughts and prayers” often offered by public figures after a tragedy. The outpouring reveals the way that Christian faith has long been intertwined with American football culture, tied to the sport through its popularity in the Bible Belt. Strengthening the bond is the closeness of players whose risk of physical danger in the high-impact sport has attracted more publicity in recent years.

Video circulated online of Cincinnati Bengals fans reciting the Lord’s Prayer in the stands. On ESPN on Tuesday, analyst Dan Orlovsky, a former NFL quarterback, told his colleagues on the live broadcast that “it’s just on my heart that I want to pray.” Bowing his head and closing his eyes, he did so.

“Please pray for our brother,” Bills’ quarterback Josh Allen wrote on Twitter, where players and coaches across the league shared similar messages. All 32 NFL teams changed their Twitter profile pictures to a message reading “PRAY FOR DAMAR,” in the style of Hamlin’s blue jersey. Fans huddled in vigils outside the hospital in Cincinnati and outside Highmark Stadium in Buffalo, New York, where Jill Kelly, the wife of former Bills quarterback Jim Kelly, led a crowd in prayer.

“I think we all have to recognize the power of prayer from coaches, players, the staff and the fans that was in that stadium, and the people watching from around the world,” Troy Vincent, the executive vice president of football operations at the NFL, told reporters Wednesday afternoon. “There is power in prayer.”

To outsiders, the intensity of these expressions of faith might have seemed surprising, an unusual display of public devotion in an increasingly secular culture. To observers of the close relationship between Christianity and American football, the exhortations to prayer were natural.

“It’s an example of seeing in public a Christian subculture that’s been embedded in the NFL for four decades,” said Paul Putz, assistant director of the Faith & Sports Institute at Baylor University. “Since the 1970s, it’s had almost like its own church.”

Most Christian ministries that operate within the NFL are tied to the evangelical tradition, but the league’s religious culture isn’t straightforwardly conservative.

In part because of the NFL’s racial diversity, the evangelicalism within is “less concerned with culture-war politics and more about applying the Bible, understood through an evangelical lens, to practical needs of players — athletic performance, marriage and family, and dealing with injuries and setbacks,” Putz said.

American sports culture is shot through with links to Christian organizations and expressions of Christian faith, from pointing upward to thank God after a good play to crediting Him with a win in a postgame interview.

But even within that context, football stands out. A case involving a high school football coach whose practice of praying on the field after games reached the Supreme Court last year. (“It just made sense to do it on the field of battle,” the coach told The New York Times of his commitment to the ritual, even at the expense of his job.)

Former NFL quarterback Tim Tebow — now one of several ex-NFL players who are popular speakers at Christian conferences and churches — was known for dropping to one knee and bowing his head on the field, a move that became known as “Tebowing.”

“The NFL has been very open and receptive to faith for many years,” said Jason Romano, director of media at Sports Spectrum, a publication that covers the intersection of sports and Christian faith.

“God has been setting up something like this to happen,” Romano said, emphasizing that he did not believe that God designed Hamlin’s injury, but rather that the outpouring of Christian prayer in response reflected a culture of faith that has been developing within the league for decades.

After every game, he pointed out, players from both teams kneel at the 50-yard line for a prayer, a tradition that started in 1990 after an acrimonious Monday Night Football matchup between the San Francisco 49ers and the New York Giants.

For many players, the support of their team chaplains is like “an oasis to us, like water in the desert,” recalled Vincent Rey of his time as a former Bengals linebacker. He is now the team’s chaplain.

He was at the game Monday and rushed down from the stands to be with the team, while his wife gathered with many of the players’ wives and girlfriends.

Rey’s typical work as a chaplain is less dramatic. He holds a weekly Bible study for players, a chapel service before games, counsels individual players and offers an evening gathering for couples, where he and his wife lead a discussion of “Draw Close,” a Christian devotional that focuses on marriage.

That institutional culture means that prayer is a natural response for many to a traumatic event like Hamlin’s injury.

Public prayer is “a muscle twitch people go to,” said Marcia Mount Shoop, a pastor in North Carolina whose husband was an NFL coach for 12 seasons.

“It’s not seen as a sign of weakness because it has for decades been bundled with masculinity,” said Rev. Mount Shoop, the author of “Touchdowns for Jesus and Other Signs of Apocalypse: Lifting the Veil on Big-Time Sports.”

“It’s performed all the time by big, strong men, who in a few minutes are going to be knocking the crap out of everyone,” she said.

Hamlin graduated from a Catholic high school in Pittsburgh and has spoken occasionally of his faith. “I feel like that’s God talking to me,” he told a reporter in 2021, referring to his charitable work. “I really feel like that’s what my purpose is. That’s why He put me here.”

Brian Tome, a former high school football player and a Bengals fan, watched the game at home Monday night. What struck him, he said, was how television commentators struggled for words as they pivoted from covering a late-season game to the outpouring of fear and sadness around an emergency medical event.

“America got to see people be empathetic,” said Tome, the pastor of Crossroads Church, with locations in Cincinnati and elsewhere. “These moments of crisis are bringing something out in us that’s really positive.”

About a mile from the University of Cincinnati Medical Center, where Hamlin remained sedated and in critical condition, Tome hosted a community prayer service at his church for Hamlin on Tuesday.

“We can’t participate in the medical process,” he told the assembled crowd of about 100, with hundreds more streaming the service online. “But we can participate in prayer.”

For former players, the injury was a reminder of the sport’s inherent risks — for some of them, a factor that drew them to trust in a higher power.

Bill Curry, a longtime college football coach who played for 10 seasons in the NFL in the 1960s and ’70s, said that the sport of football is unique in that players rely on each other intimately for both success and physical safety.

“Football is one of the only sports where you need every player for every play,” he said.

Curry was driven off the field in an ambulance in 1973, when a knee injury ended his career with the Houston Oilers. He said prayer was a constant resource for many in the league.

“We knew the risks we were taking, and we knew that at any time something could happen,” Curry said. “We played the macho role, but in our heart of hearts it was constantly, ‘Lord, I need you, please be by my side.’”

Netflix Axes ‘1899’ After Just One Season