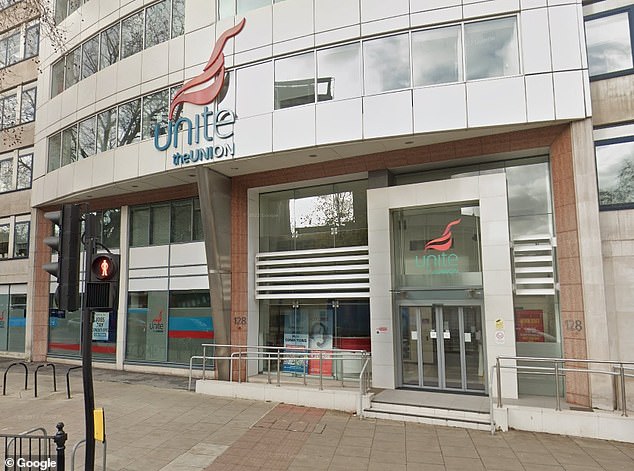 By Mark Duell and Katie Feehan For Mailonline

Police have searched the headquarters of the Unite union as part of an investigation into allegations of bribery, fraud and money laundering.

The union said one of its employees is subject to a criminal investigation and that the person’s office in Holborn, central London, was searched by police on Wednesday.

Asked about the search, South Wales Police said it had executed a number of warrants at addresses across England and Wales, including in London, in relation to allegations of bribery, fraud and money laundering.

A spokesperson for the force said no-one had been arrested at this stage.

A Unite spokesperson said: ‘A Unite employee is subject to a criminal investigation by the police.

‘On Wednesday April 6, the employee’s office at Unite HQ, in Holborn London, was accessed and searched by the police under warrant.’

‘The joint investigation with Her Majesty’s Revenue and Customs is continuing and a number of suspects will be interviewed in due course.’

It comes after up to 20 officers were seen leaving with boxes of files, paper and a computer at the Unite headquarters in London.

Two police vans and a number of unmarked police cars were involved in yesterday’s operation which was led by South Wales Police.

Unite was formed in 2007 when the Transport and General Workers’ Union merged with Amicus, and it is Britain’s second biggest union with 1.24million members.

Unite’s general secretary is Sharon Graham, who was elected in August 2021 and took over from Len McCluskey, who had run the union since 2011.

There is no suggestion that either Ms Graham or Mr McCluskey are being investigated.