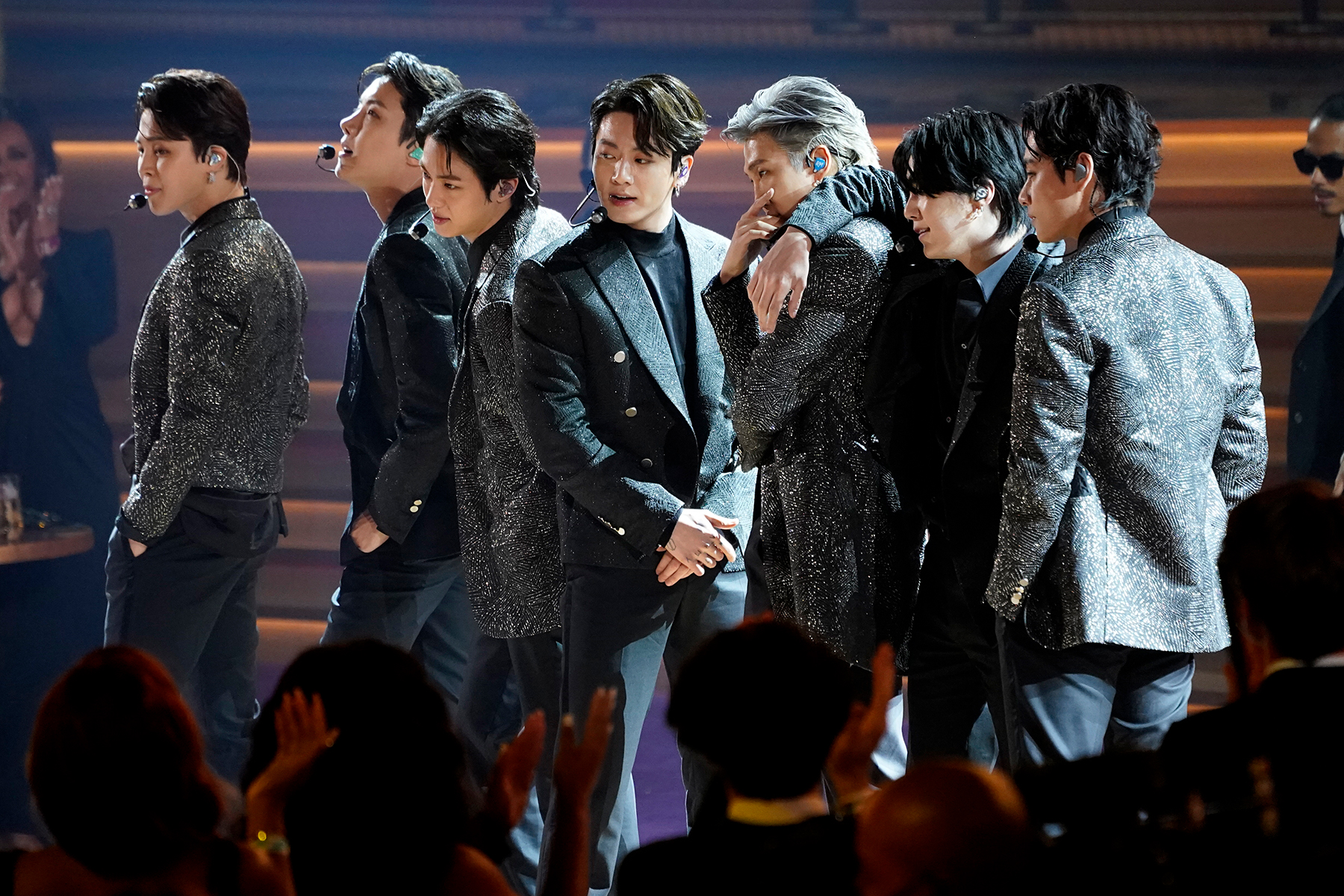 The Grammys are not done evolving, according to the ceremony’s executive producer, Ben Winston, who took over the show last year from Ken Ehrlich, the show’s mastermind for over 40 years. Winston and Raj Kapoor, the show’s executive producer and showrunner, joined the latest episode of our Rolling Stone Music Now podcast to delve into behind-the-scenes secrets of this year’s ceremony, address criticisms, and much more.

To hear the whole entire episode, press play above, or listen on Apple Podcasts or Spotify. Some highlights follow:

BTS almost did not perform – and were not able to rehearse as a full group until the day before the ceremony.
“There were times when we were worried they were not going to be able to be here,” Winston says. J-Hope had Covid and was quarantined. And he was not allowed to fly until Saturday, the day before the show, Jungkook was in Vegas with Covid, but then unless he got two negative tests, he was not allowed to come. It was very tense. We were very nervous… I was actually so excited by that one, not because it was better than anyone else’s, but simply because I knew what those seven guys had been through to get it to that level… I do think those guys are unbelievably talented . I am sort of in awe of what they do each time. ”

Not enough rap performances this year? The producers agree.
“We would’ve loved a bit more hip-hop,” Winston says, while pointing to the numerous rap performances at last year’s ceremony as evidence of his goals for the show. “We are not always going to get the exact quota that we want. We’re always trying. It was definitely not a conscious decision to only have Nas as a hip hop performance… We lost a couple of artists in the [show’s] move from LA to Vegas. So, you know, shit happens. We did our best. ”

The bleeping during Justin Bieber’s set was because he was supposed to self-censor his lyrics, and failed to do so.
“I think he was probably just swept up in the moment and forgot not to say the word ‘shit,'” says Winston. “I do not think there’s anything more than that.”

The rain during Billie Eilish’s set was not real, for purely practical reasons.
“Ultimately it was decided that Billie and Finneas did not want to physically get wet,” says Kapoor. “Because she wanted to sit and enjoy the rest of the evening without actually taking a lot of time to go back into glam. So we came up with this really amazing digital effect. ”

The producers apologize for “in memoriam” omissions, which included Drakeo the Ruler, Parliament-Funkadelic’s Calvin Simon, and Slipknot’s Joey Jordison – and address the absence of any mention of the victims of December’s Astroworld crowd crush.
“Anybody who feels left out or feels almost snubbed by an in memoriam, I think from the bottom of our hearts, there can only be apologies because we go into this show only wanting to bring joy and love to people with music,” says Winston , who notes that the Academy, not the show’s producers, come up with the list of names. “As for the Astroworld victims, I think that’s a really fair point. I think, you know, maybe we should have done something ”

With a new head of the Recording Academy (Harvey Mason Jr.), various procedural changes, and a new production company behind the ceremony, the producers are trying to convince artists who have beefs with the Grammys that massive change has already happened.
“I would meet artists on this journey over the last couple of years and they’d be like, ‘well, the Grammys have done this and the Grammys have done that and it’s time for it to change,'” says Winston. “And I’m like, yeah, yeah! That’s why I’m [sitting] here. That’s what we can do, be part of the change rather than just being angry about what’s gone before. ”