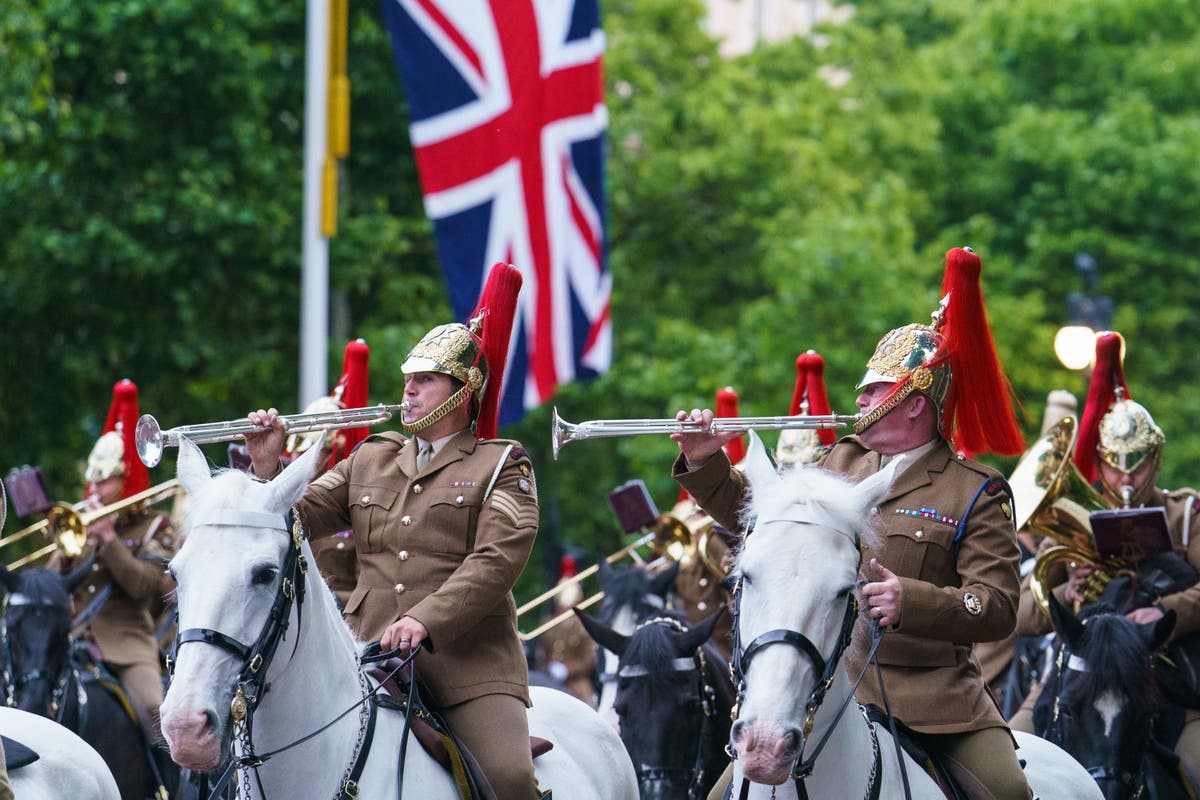 From the spectacle of Trooping the Colour to an all-star concert at Buckingham Palace, here’s what to enjoy over the next few days.

The procession will ride at 10am from The Mall to Horse Guards Parade, with the Prince of Wales, the Duke of Cambridge and the Princess Royal on horseback.

Trooping the Colour will follow and the traditional march — trooped by the 1st Battalion, Irish Guards with Prince William as Colonel of the Regiment. Around 1,500 officers and soldiers and 250 horses from the Household Division will stage the display accompanied by 400 Army musicians. It will close with a six-minute RAF fly-past by more than 70 aircraft.

Observing from the Buckingham Palace balcony with the monarch will be “working” royals including the Prince of Wales and the Duchess of Cornwall, and the Duke and Duchess of Cambridge and their children.

More than 3,000 Jubilee beacons will be lit around dusk across the UK, Channel Islands, Isle of Man, UK overseas territories and the Commonwealth to pay tribute.

The 21-metre principal beacon outside the Palace — a “Tree of Trees” sculpture imagined by British designer Thomas Heatherwick, the creator of the 2012 Olympic Cauldron, for the Queen’s Green Canopy initiative — will be illuminated by a senior royal, and light projections will grace the Palace facade.

On Saturday, a traditional service of thanksgiving will be held at St Paul’s Cathedral.

Just before 11am, England’s largest church bell Great Paul will ring to mark the service.

Great Paul’s broken chiming mechanism means it will be rung manually for the service, for the first royal occasion after its restoration was finished last year. The bell was rung for the first time in Loughborough in March 1882, and also rang out for the Queen’s coronation. Members of the royal family will arrive at 11am at the closed event along with guests.

All of the Queen’s cousins, children and grandchildren are due to attend, so Prince Andrew and the Duke and Duchess of Sussex are expected to be present, according to reports.

The Archbishop of Canterbury will miss the ceremony as he tested positive for Covid-19. He will be replaced by the Archbishop of York, Stephen Cottrell. The service will be followed by a Guildhall reception hosted by the Lord Mayor, with members of the royal family arriving from 12.25pm.

Saturday: Epsom Derby and Party at the Palace

The Queen was due to attend the Epsom Derby, but she no longer plans to do so in order to pace herself throughout the weekend. The Princess Royal is expected to represent the monarch at the racecourse, where up to 40 past and present jockeys are due to form a guard of honour.

In the evening, Queen and Adam Lambert will open the BBC’s Party at the Palace — in echoes of the Golden Jubilee performance 20 years ago when guitarist Brian May riffed God Save The Queen on the roof.

The concert, live on BBC1, runs from 8pm to 10.30pm, and is set on three stages linked by walkways in front of the Victoria memorial, with a live audience of 22,000 people.

A public ballot decided 10,000 attendees with more than 7,500 tickets for key workers, members of the Forces and charity workers.

Closing the show with her first UK live performance in 15 years will be Diana Ross. The night will also feature a special pre-recorded performance from Sir Elton John. The show will feature appearances from celebrities including Sir David Attenborough, Emma Raducanu, David Beckham, Stephen Fry and Dame Julie Andrews.

An expected 10 million people will join street parties, barbecues and picnics, where they can recreate the official Platinum Pudding, a lemon and Swiss roll amaretti trifle.

More than 85,000 Big Jubilee Lunches are being held across the UK. Camilla, patron of the Big Lunch, will join Charles at a flagship feast at The Oval, while the Earl and Countess of Wessex will meet people creating the “Long Table” down on The Long Walk leading up to Windsor Castle.

Sunday celebrations also coincide with this year’s Thank You Day — originally set up to pay tribute to those who helped people through the pandemic.

The finale will be the Jubilee Pageant running through the streets of London. From Whitehall to Buckingham Palace, the parade will include original film footage from the coronation, a gospel choir joining the Band of Her Majesty’s Royal Marines and huge puppets on the carnival route. The £15 million 3km procession will feature 10,000 participants, as well as puppet corgis, a giant 3D wire bust of the Queen and the Gold State Coach. Stars including Idris Elba, Sir Cliff Richard and Slade’s Noddy Holder will take to open-top buses in a tribute to the culture and music of the seven decades of the Queen’s reign.

It is hoped the monarch will make a final appearance on the palace balcony to see Ed Sheeran singing the national anthem with a choir of nearly 200 celebrities.