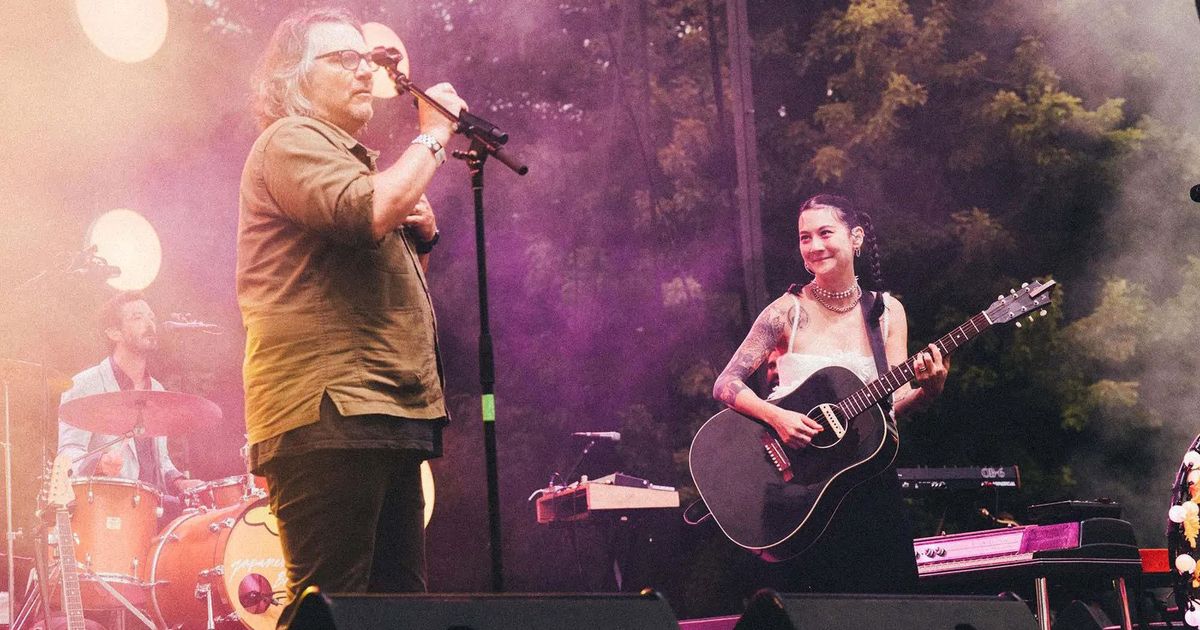 Pitchfork Festival tends to be one of the better-curated weekends of the summer – especially compared to Chicago counterparts like Lollapalooza – thanks to its emphasis on music discovery. But this year’s event added a dimension of fan service to the equation. You could practically envision the type of music lover who’d attend each day: the millennial indie guy ready to rock to the National and Parquet Courts on Friday; the extremely online fan hungry for the catharsis of Mitski, Japanese Breakfast, and Lucy Dacus on Saturday; the old and young hip-hop head uniting around Earl Sweatshirt, Noname, and the Roots on Sunday. And each one had more than enough reason to leave happy. I saw all of it over three days – and much more, from astonishing side-stage performances to lots of rain and mud. Ahead, some of the best (and worst) moments of Pitchfork 2022.

HIGH: The early festivalgoer was rewarded.
The soothing voice of Pakistani singer Arooj Aftab floated through a rainy Union Park on Friday; her beautiful, meandering ballads were the perfect way to ease into the festival. The same went for Saturday, when guitarist Jeff Parker and his jazz collective the New Breed opened with a jam session, and Sunday, when rapper Pink Siifu crowded the stage for a smoke-filled, laid-back celebration of Southern music. Aside from those chill kickoffs, there were some early big draws, like a sweats-clad Ethel Cain, whose “Family Tree” sounded like a dark incantation in the rain. But the biggest reason to show up when the gates opened? Chicago raunch rapper CupcakKe, whose bravado was so contagious she was able to lead a crowd of thousands to shout about sucking dick at 2 pm on a Saturday.

LOW: The rain.
Sure, complaining about inclement weather at a festival is nothing new. But every time it seemed like the rain would let up on Pitchfork, it kept going – especially on Sunday, when it wasn’t even forecast to rain. The downpour eventually made a massive mud pit at one of the stages on Sunday, where no fans dared to step. (It also led Earl Sweatshirt to assure the audience his music was not fit for moshing.)

HIGH: A rapper for everyone.
When 2021’s lineup featured a pitiful three rappers, I wondered if Lyrical Lemonade Summer Smash and Lollapalooza were pricing Pitchfork out of rap bookings in Chicago. Thankfully, this year brought nine rap acts to the fest, which provided a little something for everyone: thoughtful bars from Noname and Earl Sweatshirt, blasts of energy from CupcakKe and Monaleo, endless grooves from the Roots and Pink Siifu. Then there was underground New York rapper Wiki, who had all of that and more, as he animatedly reflected on his roots in his trademark nasally sneer. Wiki’s producer Subjxct 5 proved equally integral, especially when he dropped a fantastic and jittery new track off their upcoming collab Cold Cuts (which Wiki accurately described as “the disco era and the Memphis era in one”).

WHOA: Dawn Richard was the real headliner.
It’s hard to get a crowd of music nerds to dance, but that did not stop Dawn Richard. When I arrived a few songs into her mid-evening set at the small, tucked-away Blue Stage, the audience was already moving. Dance anthems off her 2021 album Second Line, including “Bussifame” and “Boomerang,” became even more powerful live, and were punctuated by stunning choreography and an interpolation of No Doubt’s “Don’t Speak.” With a red wig that nearly hit the floor and backup dancers on either side of her, Richard looked the part of a headliner; as she danced, rapped, and belted her way through her set, she acted it too. And the former Danity Kane member showed that her versatility extended far beyond dance music, like when she wailed the Cranberries’ “Zombie” into a sparkling, Auto-Tuned mic, while kneeling in front of her soloing guitarist. “I gave you every piece of me,” Richard declared on her final song, “Heaven,” but that still wasn’t enough. Minutes later, she returned to give even more, performing an encore in a lit-up, crownlike headpiece that soon fell off from her vigorous dancing.

like half of my notes on dawn richard are in all caps and this is why pic.twitter.com/ZFECni1OC4

LOW: The many lineup changes.
If you were looking forward to rapper Tkay Maidza or jazz-rockers BadBadNotGood, sorry – both acts canceled last minute, due to visa issues and illness, respectively. That was on top of an earlier cancellation by English rock group Chubby and the Gang, who pulled out of a US tour ahead of the festival. At least the event had some top-notch replacements in its back pocket, including rockers the Linda Lindas, Houston rapper Monaleo, and Chicago experimental mainstays the Natural Information Society.

WHOA: The Armed’s beautiful chaos.
Days later, I’m still trying to wrap my head around what I witnessed during the Armed’s Saturday Blue Stage set. Yes, I did see 11 people crowd onto the stage – including a blindfolded keyboardist and three backup singers in Juggalo facepaint – and tear through 45 minutes of maximalist hardcore. The screaming and shredding were unrelenting, and seemingly every other song saw some member of the band jump into the crowd; hell, by the end, half of them had gotten swallowed by the pit at the front of the stage. As big of a production as it was, the set still felt intimate, even from a band of rotating characters whose identities are mostly a mystery.

HIGH: yeule and Magdalena Bay brought their pop visions to life.
I finished Friday at Thalia Hall, where the electronic musician yeule played a Pitchfork pre-show in the round. The setting perfectly served their performance, as Nat Ćmiel, lithe and acrobatic, moved to the music across the stage. Their use of vocal effects meant the songs did not sound much different live, save for a tender moment toward the end when they picked up a guitar to play “Eyes” and “Don’t Be So Hard on Your Own Beauty.” But that was not the point of the show – it was to share in this internet-born music in person, to dance around to the gloriously cathartic “Bites on My Neck” at the end of the set. Meanwhile, Magdalena Bay more than excelled at bringing their brand of pop to one of their biggest stages yet. The duo ran through their fantastic 2021 album Mercurial World in order, as they did on tour – but without the colorful set pieces and projections they had when I saw them in February. That barely mattered, though, as singer Mica Tenenbaum quickly got the crowd moving, while Matt Lewin ripped through guitar solos, adding a sharp live edge to their usually polished music.

WHOA: Japanese Breakfast does it all.
The last two years have been a showcase for Michelle Zauner’s myriad talents, from making terrific indie-pop as Japanese Breakfast to writing her poignant bestselling memoir Crying in H Mart. She packed as much of that talent as she could into an hour during her Pitchfork set. At the outset, she was a pop star, dancing and banging a flower-covered gong to her buoyant Jubilee songs “Paprika” and “Be Sweet.” Later, she was a bandleader for a stellar rendition of “Glider,” one of her compositions for the 2021 video game Sable. She was then a duet partner to Chicago icon Jeff Tweedy, who joined for his favorite song of hers, “Kokomo, IN,” and a performance of Wilco’s “Jesus, Etc.,” featuring beautiful harmonies from Zauner. And she closed as a rock god, pouring out the minutes-long guitar solo of “Posing for Cars” before a face-melting “Diving Woman.”

HIGH: Mitski had what the National lacked.
Friday’s National set had a simple draw: the band’s first US gig since the pandemic. But unless you were a National devotee (and to be fair, much of the crowd was), it lacked the excitement a headlining set ought to bring. Sure, the guitars sounded strong, and the band’s new songs fit right in, but the performance only excelled for brief moments, like when Matt Berninger entered the crowd for “Mr. November.” Saturday’s headliner, Mitski, put on much more of a show, running through renditions of songs from across her career, complete with her signature interpretive dance choreography. (Shockingly, she never picked up a guitar.) For such a production, the tracks felt immediate; both weaker cuts from her recent Laurel Hell and her strongest songs, like 2018’s “Geyser,” benefited from larger-than-life renditions from her five-piece band. For all Mitski gave as a performer, the enraptured crowd gave it right back, screaming at her every move.

WHOA: The main stages got weird.
Usually, fans have to seek out the oddest performances at the smaller Blue Stage, but on Sunday, they were right there on the main stages. It began with L’Rain, the experimentalist whose practice of “approaching songness” was on full display as she led a band through her shifting, exploratory tracks that fall somewhere between free jazz and experimental-electronic. She relished the process, often laughing and smiling at her impeccable band as they played. Later, the Natural Information Society jammed for a meandering hour, all held together by bandleader Joshua Abrams on the guembri. Even some of the rap acts veered left-of-center, like Injury Reserve’s dissonant set, or Earl Sweatshirt’s jazzy, pensive hip-hop.

LOW: The number of Chicago musicians.
Just three of the acts who performed at Pitchfork currently live in Chicago, since local heroes Jeff Parker and Noname moved to Los Angeles. (And one of those acts, the National Information Society, was a last-minute addition to the lineup.) It’s a strikingly low number for a festival that tends to spotlight its host city’s talent. That entirely did not halt the weekend’s city pride though, particularly on Sunday, when silk-voiced R&B singer Kaina performed with Chicago artist Sen Morimoto and drummer Ryan Pearson (who later played with Noname). Clouds blanketed the sky, but Kaina made the stage glow, warmly reflecting on her Chicago roots with songs off her recent album It Was a Home. Later, it felt fitting to see Kaina sidestage, enjoying Noname’s celebratory, loose homecoming. And after local singer Akenya joined to perform her feature on “Reality Check,” she presented Noname with a bouquet – literally giving her her flowers, she said. The crowd, excited to see the rapper back home, followed suit.

HIGH: The saxophones.
I started keeping count of saxophones on Saturday, when Dry Cleaning brought out Chicago performer Bruce Lamont to guest on “Unsmart Lady.” He was the second saxophonist I’d seen, after the New Breed’s earlier set. And they kept coming – by the end of the weekend, I’d witnessed sax performances with Japanese Breakfast, L’Rain, Kaina, the Natural Information Society, Cate Le Bon, and, of course, the Roots. Bonus points to Natural Information, which performed with two saxophones, plus a clarinet bass.

WHOA: The Roots kept playing.
As in, for nearly 90 minutes, right until 9:59 pm As in, Questlove did not stop drumming for longer than 15 seconds. As in, I thought the performance was over three different times, and they just. kept. going. For a legacy act, the long-running hip-hop band’s closing set was full of the unexpected, from a sousaphone solo by Damon “Tuba Gooding Jr.” Bryson to a guest rap from Chicago Hannibal Buress to a cover of Kate Bush’s “Running Up That Hill.” And the Roots and the crowd both did not want it to end.