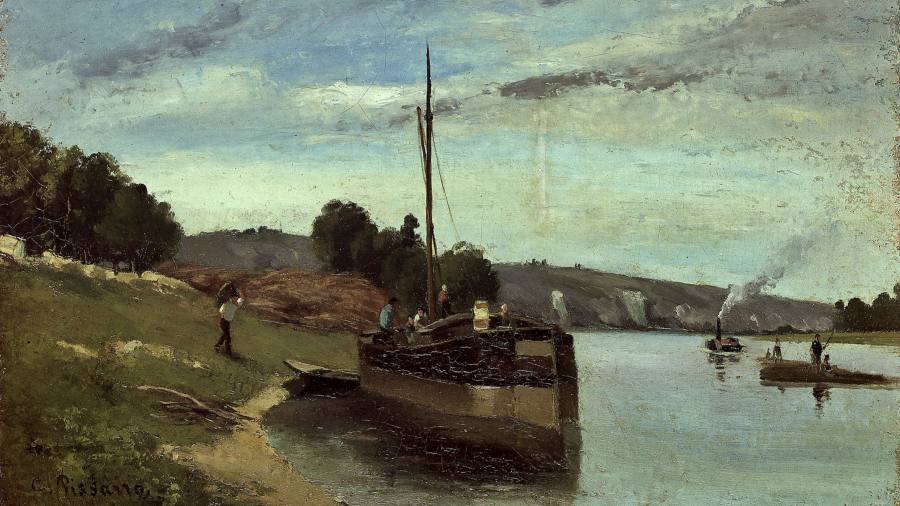 The dealer Paul Durand-Ruel made fortunes from and for Monet and Renoir while keeping their fellow Impressionist Pissarro impoverished and struggling until his last breath. “I am hardly besieged by demands!” ran Pissarro’s final letter to his son in 1903. “We are far from being understood.” But when Durand was dying he forgot about Monet and Renoir and “imagined paradise as having the serene sweetness of a landscape by Camille Pissarro”.

There are many candidates for paradise in Pissarro: Father of Impressionism at the Ashmolean Museum in Oxford. “Spring: Plum Trees in Bloom” bursts white staccato flakes across the canvas, superimposing them on to a hillside ridge of houses, firm and static. “Landscape near Pontoise” is a natural harmony: bands of grey-blue sky, muted yellow meadow, green foreground with haycart, rickety fence and a path inviting us to amble into the painting.

Or there is “Apple Harvest, Éragny”: figures under the shade of the branches surrounded by a field of orange, pink, lavender, blue dots and dabs evoking a warm early autumn afternoon. All celebrate the ordinary; all contain nature within an architectonic frame — deliberate, unified.

Steady, steadfast, overlooked, refusing to be showy, collaborative: what exactly was Pissarro’s role in the revolution of 19th-century French painting? The Ashmolean — which, thanks to the emigration of the artist’s eldest son to England, has an exceptional Pissarro collection — joins forces with Basel’s Kunstmuseum to explore the question. The show’s title comes from Cézanne, memorialising a period when the pair worked together.

But if Pissarro was father to younger artists, he was a most open-minded one, learning as enthusiastically from them. Loans here of works by Cézanne, Monet, Degas and Seurat chart the artistic exchanges, rivalries, disappointments and illuminations that fuelled Pissarro’s thinking and made him, also in Cézanne’s words, “the humble and colossal Pissarro”.

He was an outsider, needing to make French pastoral tradition his own. Born in 1830 on the Caribbean island of St Thomas to French-Jewish merchants, Pissarro did not settle in Paris until 1855, and fell immediately under the influence of Corot’s fresh, delicate realism — his silvery, gentle “Duck Pond” opens the show. The debt is clear in Pissarro’s earliest painting here, “Barges on the Seine” (1863) — sober hues and lively handling of water. Already his interest in the workaday world — chugging steamer, busy labourers — is distinctive.

Almost all of Pissarro’s work before 1870 disappeared when German officers ransacked his home during the Franco-Prussian war. We re-encounter him in the fully fledged Impressionist 1870s heyday on the Seine: he settled at Pontoise, and attracted Cézanne to move nearby; Monet and Renoir painted a few kilometres upstream at Argenteuil. They shared fragmented brushstrokes capturing fleeting light effects: snowscapes enlivened by coloured shadows and softening, blurring strokes, for example, in Pissarro’s “Snow Scene at Pontoise” and “Farm at Montfoucault” and Monet’s “The Boulevard de Pontoise at Argenteuil”.

Pissarro homes in on the shivering peasant with his bundle, the traveller battling uphill with his cart. And while Monet and Renoir painted regattas at Argenteuil, popular Impressionist leisure scenes, Pissarro depicted Pontoise’s billowing potash factory in “Quai du Pothuis at Pontoise”, and peasants working in the beautifully modulated hamlet view “A Corner of l’Hermitage”.

An interest in social cohesion had its equivalent in cohesive pictorial structure. In this aspect of Pissarro, Cézanne, seeking to “make of Impressionism something solid and durable, like the art of museums”, saw a master, and then pushed beyond him. Paired rhythmic compositions of a sloping bank and houses glimpsed through screens of trees in Pissarro’s “The Côte des Boeufs, Pontoise” and Cézanne’s “The Côte Saint-Denis at Pontoise”, both 1877, show influence, and difference — Cézanne’s compressed monumentality, his greater translucency. The impact was two-way: Pissarro’s “The Quarry”, with its glowing patch of yellow laid on with a palette knife, has Cézanne’s fierceness.

By 1879, a depressed market, and questions of how to develop an art rendering the passing instant, pushed all the Impressionists into crisis. Cézanne retreated to Provence, and Pissarro the political radical collaborated in printmaking with Degas, the conservative anti-Semite. Their complex, densely textured etching and drypoint studies yield lavish dramas of light and darkness, Degas in figure pieces, Pissarro in landscapes: willows in “Setting Sun”, peasants in a downpour in “Rain Effect”, the airy, luminous “Wooded Landscape at l’Hermitage”.

In the 1880s, ways separated again: Degas towards pastel, Monet refining seascapes by expressive contortions, which Pissarro thought “romantic, retrograde”. He instead fell under the spell of pointillist Seurat, forcing his admission to the eighth, final Impressionist exhibition in 1886 — from which Monet and Renoir withdrew. Seurat’s technique of tiny vibrant dots in complementary colours attempted to rationalise impressionism — his “Channel at Gravelines”, anchor, sailing boat and gaslight positioned like props in a composition mysteriously alternating flatness and depths, is a star Oxford loan from MoMA.

Pissarro spent years painstakingly producing scant, unsaleable pictures in what he called the “primitive-modern” pointillist mode. The masterpiece, depicting fields, orchards, barn, red roof and poplars, slotted together with jigsaw precision, is the joyful “View from My Window, Éragny” — Pissarro’s recent farmhouse home. He bought it thanks to a loan from Monet, whose fortune soared after inventing the series painting with “Haystacks”.

Bemused, Pissarro watched his friend’s success in 1891: “This is a bad moment for me. People want nothing but Monets. Worst of all they all want ‘Haystacks in the Setting Sun’! I don’t understand how Monet can submit to this demand that he repeat himself.” But soon Pissarro grasped series painting as an apotheosis of the Impressionist fixing of the instant. Birmingham’s “Boieldieu Bridge at Rouen, Sunset” (1896) and the Ashmolean’s “The Tuileries Gardens, Rainy Weather” (1899) represent the two magnificent symphonic urban series of Pissarro’s final years — a return to freer mark-making, achieving grandeur through his instinct for construction.

These won acclaim mostly after his death, and “The Tuileries” is especially poignant: from the Hôtel du Louvre, Pissarro, almost 70, calmly painted the gardens of the royal palace, epicentre of French history, as his own place in it was threatened by the Dreyfus Affair. Degas cut him off, anti-Semitic mobs harassed him, but “despite all these anxieties, I must work at my window as if nothing has happened”.

Degas skipped Pissarro’s funeral four years later. “What did he think of the embarrassment one felt in his company . . . Did he think only back to the times when we were more or less unaware of his terrible race?” he wondered. Yet Degas was unsettled: he dreamt he met Pissarro “and as if I were awake, I had the presence of mind to stop myself just as I was going to say to him: ‘I thought you were dead.’” The dream held the truth: Pissarro remains alive, enriching, enraptured, to artists, history and art lovers.