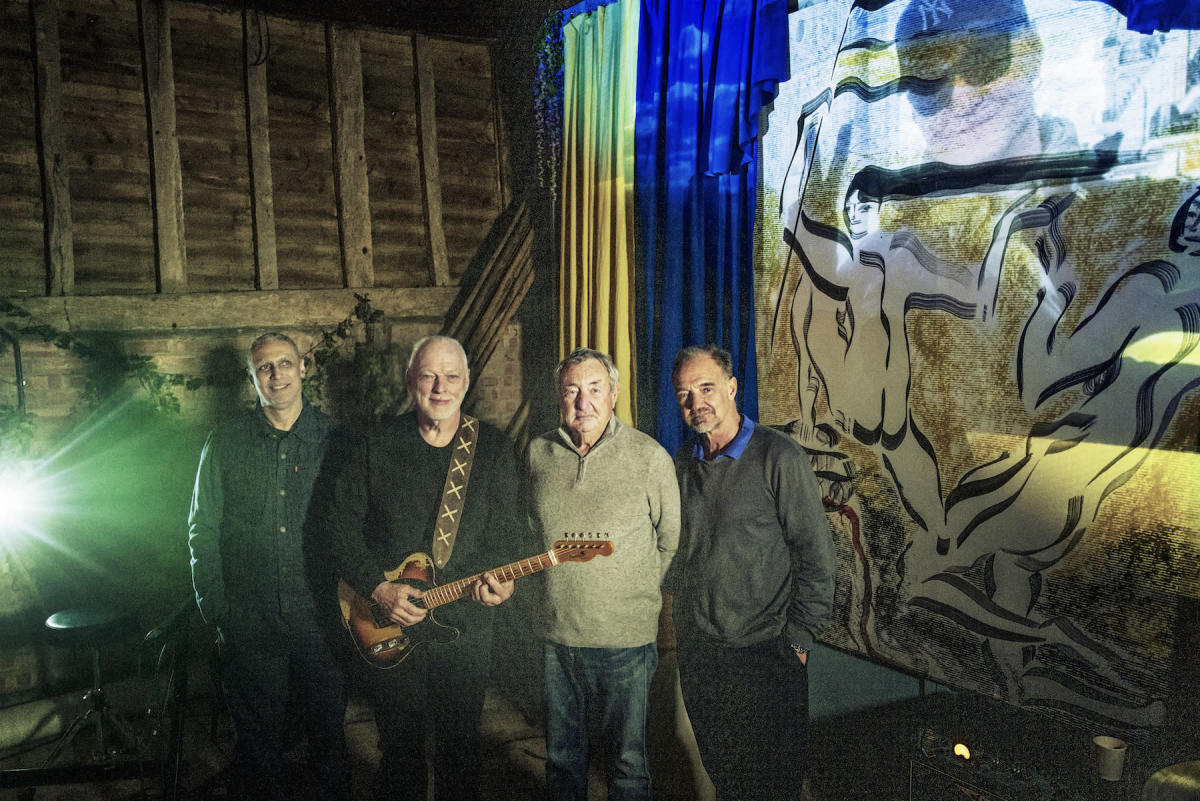 Pink Floyd have reunited for a one-off charity single to raise money for Ukrainians affected by Russia’s invasion. “Hey, Hey, Rise Up” features vocals by Andriy Khlyvnyuk of the Ukrainian band, Boombox, who recorded himself in full military gear singing the folk song, “The Red Viburnum in the Meadow,” to the empty streets in Kyiv’s Sofiyskaya Square.

David Gilmour was so moved by the performance that he called Nick Mason, bassist Guy Pratt, and keyboardist Nitin Sawhney and organized a recording session last Wednesday that featured video of Khlyvnyuk projected on the wall. The performance marks the first time Pink Floyd have recorded new music since the release of 1994’s The Division Bell. (The music on 2014’s The Endless River came from the Bell Division sessions.)

The song’s video shows the band recording the tune with a Ukrainian flag and Khlyvnyuk’s video projected behind them, along with footage of Ukrainians affected by the horrors of the war. The group will donate money raised from the song to the Ukraine Humanitarian Relief Fund.

“We, like so many, have been feeling the fury and frustration of this vile act of an independent, peaceful democratic country being invaded and having its people murdered by one of the world’s major powers,” Gilmour said in a statement. “I hope [the track] will receive wide support and publicity. We want to raise funds for humanitarian charities, and raise morale. We want to express our support for Ukraine and in that way, show that most of the world thinks that it is totally wrong for a superpower to invade the independent democratic country that Ukraine has become. ”

In a statement, Gilmour explained that in 2015 he was supposed to play a London concert that would also feature Boombox. Unfortunately, Khlyvnyuk had visa problems and did not make it to the show, so Gilmour performed “Wish You Were Here” with the rest of Boombox. “Recently I read that Andriy had left his American tour with Boombox, had gone back to Ukraine, and joined up with the Territorial Defense,” Gilmour said. “Then I saw this incredible video on Instagram, where he stands in a square in Kyiv with this beautiful gold-domed church and sings in the silence of a city with no traffic or background noise because of the war. It was a powerful moment that made me want to put it to music. ”

The band recorded the song and video in Gilmour’s barn, where he and his family recorded their Von Trapped Family broadcasts last year. His daughter-in-law, Janina Pedan, who is Ukrainian, designed the set.

Gilmour has voiced his support for Ukraine since the invasion began last month. In early March, he tweeted, “Russian soldiers, stop killing your brothers. There will be no winners in this war. My daughter-in-law is Ukrainian and my granddaughters want to visit and know their beautiful country. Stop this before it is all destroyed. Putin must go. ” A week and a half later, he removed his solo albums and the albums Pink Floyd released from 1987 to the present from streaming services in Russia and Belarus.

Back in February, Rolling Stone encountered Khlyvnyuk, who’d joined the civil defense, in the early day of the war. While Boombox had a major hit in Russia and other post-Soviet countries at the end of the 2000s, Khlyvnyuk made a pointed decision to stop performing in Russian at the start of the war in 2014.

When asked if some of his Russian peers in music and the arts had reached out to him to ask for forgiveness after the latest invasion began, he replied, “Forgiveness? Shame? You know, I’m fed up with that. In the end, it’s me who is ashamed of them. I do not feel any hatred, but I feel ashamed that so many creative, smart, and talented Russians still support the regime as if they are slaves. I do not say we, Ukrainians, are superior. I’m just ashamed. ”