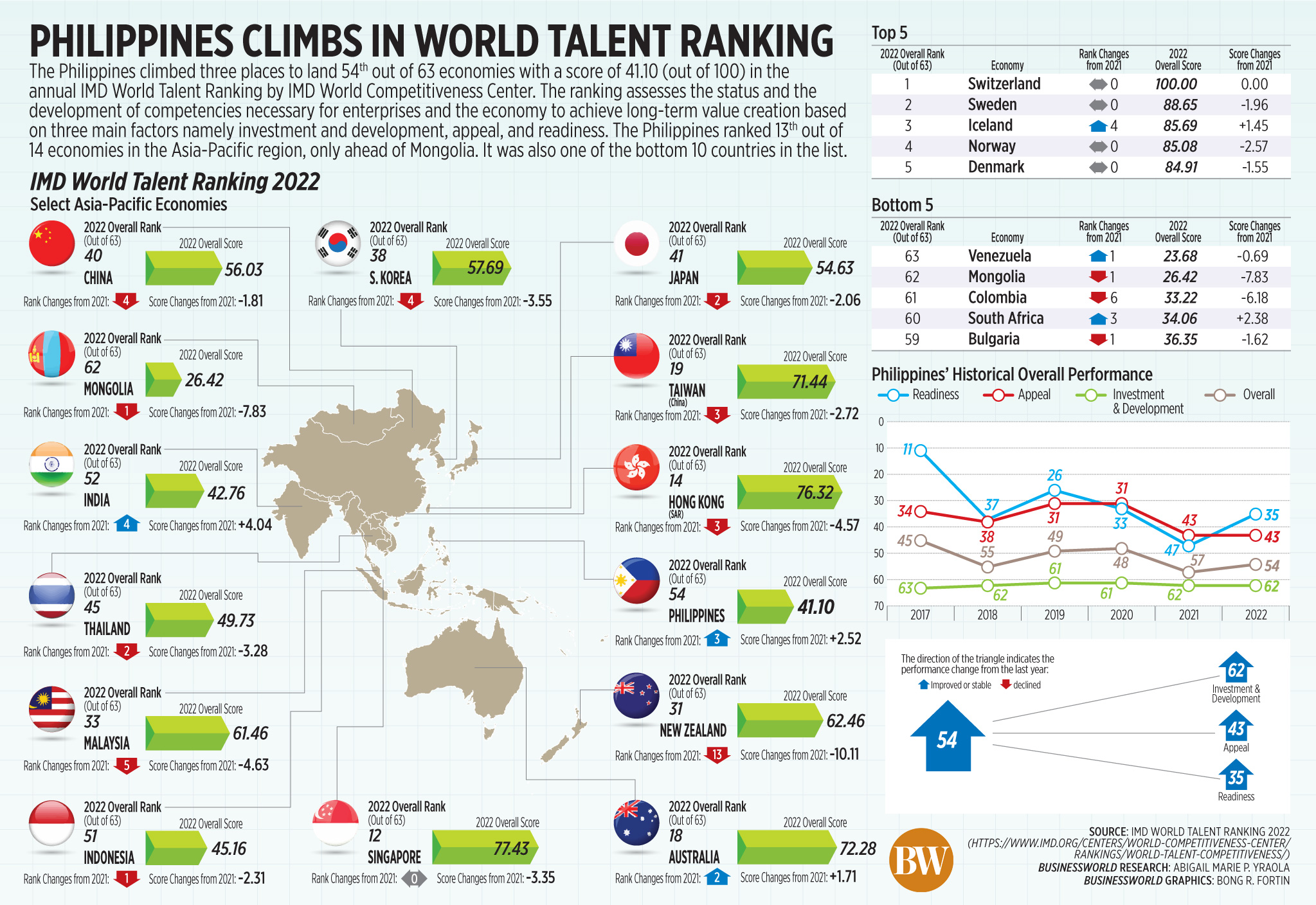 THE PHILIPPINES jumped three spots in an annual global ranking of economies that measures their ability to attract and retain a skilled workforce, a report by the Institute for Management Development (IMD) World Competitiveness Center showed.

Despite the improved ranking, the Philippines still placed 13th out of 14 Asia-Pacific economies in World Talent Ranking, ahead only of Mongolia (62nd). Singapore had the highest ranking (12th), followed by Hong Kong (14th), Australia (18th), Taiwan (19th) and New Zealand (31st).

European countries topped the index, with Switzerland, Sweden, Iceland, Norway, and Denmark in the top five.

The IMD rankings are based on three factors: “appeal” or the extent to which an economy attracts and retains foreign and local workers, “investment and development” which measures resources allotted to develop a homegrown workforce, and “readiness” which considers the quality of the skills and competencies in the talent pool.

The 2022 report showed the Philippines now ranked 35th in readiness, from 47th in 2021. It maintained its ranking for investment and development (62nd) and appeal (43rd).

“Global economies are reassessing the balance they make when cultivating domestic and international talent, in a bid to compensate for skilled labor losses as a result of travel constraints and lockdowns during the pandemic,” the IMD said in a separate statement.

“It improved in the availability of skilled labor reaching 2nd place (from 9th) and in the effectiveness of the university education to meet the demand for particular competencies (moves to 32nd rank from 40th),” Mr. Caballero said via e-mail interview.

Under the readiness factor, the IMD said that the country’s strengths are in labor force growth (3rd place), available skilled labor (2nd), competent senior managers (20th), and graduates in science-related fields such as engineering, math, natural sciences, and information and communications technology (15th).

However, the IMD said the Philippines trails other countries (57th) in terms of the Programme for International Student Assessment (PISA) by the Organization for Economic Co-operation and Development (OECD).

Students in the Philippines performed poorly in reading comprehension, science, and mathematics in the PISA 2018 cycle.

“Under the appeal factor, the level of motivation of the labor force increased from 42nd to 35th,” Mr. Caballero said.

“In the future, national education systems will become less important to determine the quality of the talent pool. This is the result of talent globalization, but also of countries borrowing successful educational policies from others and the resulting race to the top in education,” IMD World Competitiveness Center Director Arturo Bris said.

“Indirectly, quality of life and economic sustainability will indeed determine the quality of the talent pool as well. There will be winners and losers,” he added.

Mr. Caballero said that the long-term competitiveness of the Philippines would depend on “an effective talent management strategy.”

“The talent management strategy should focus on the development of in-demand skills and competencies by not only increasing but also adjusting public expenditure on education to target that development (such as alignment between investment and outcomes),” Mr. Caballero said.

“In addition, further advancements can originate in improving the levels of quality of life, addressing the root-problems (such as lack of opportunities) of brain drain and increasing the attractiveness of the country for highly-skilled overseas personnel (such as higher quality of the job environment),” he added.

Rizal Commercial Banking Corp. Chief Economist Michael L. Ricafort said in a Viber message that the Philippines’ higher ranking could be attributed to the easing of pandemic-related restrictions.

“The improvement in the country’s ranking may have to do with the further reopening of the economy towards greater normalcy, especially the easing of restrictions on the entry of foreign visitors since February 2022 and resumption of face-to-face classes. These could help the recovery of many businesses and industries especially those hard hit by the restrictions,” Mr. Ricafort said.

He said these efforts will help boost the productivity of students, after learning losses during the coronavirus pandemic.

Ruben Carlo O. Asuncion, chief economist at UnionBank of the Philippines, said in a Viber message that there should be more investments towards developing the human capital.

“Investing in the Filipino is almost always the step in the right direction,” Mr. Asuncion said. “(There should be) ever-increasing investments in top-notch education and training for all Pinoys. Market-responsive curriculum/curricula should be top priority.”

Chris Nelson, British Chamber of Commerce of the Philippines executive director, said via mobile phone that the country would improve its ranking by finalizing its participation in the Regional Comprehensive Economic Partnership (RCEP) trade agreement, as this would attract foreign investments.

“It is also very important that the Senate sign and complete the RCEP. That is important because it is the largest trading bloc in the world. Many other countries have already ratified. The Philippines would clearly benefit from being a member of RCEP and would further encourage investments here,” Mr. Nelson said.

Touted as the largest free trade agreement, the RCEP, entered into force on Jan. 1. The participating countries include the 10 members of the Association of Southeast Asian Nations, Australia, China, Japan, South Korea, New Zealand.

The Philippines has yet to finalize its participation in the RCEP as it awaits the Senate’s concurrence of the trade deal.


Deion Sanders has his first five-star recruit at Colorado