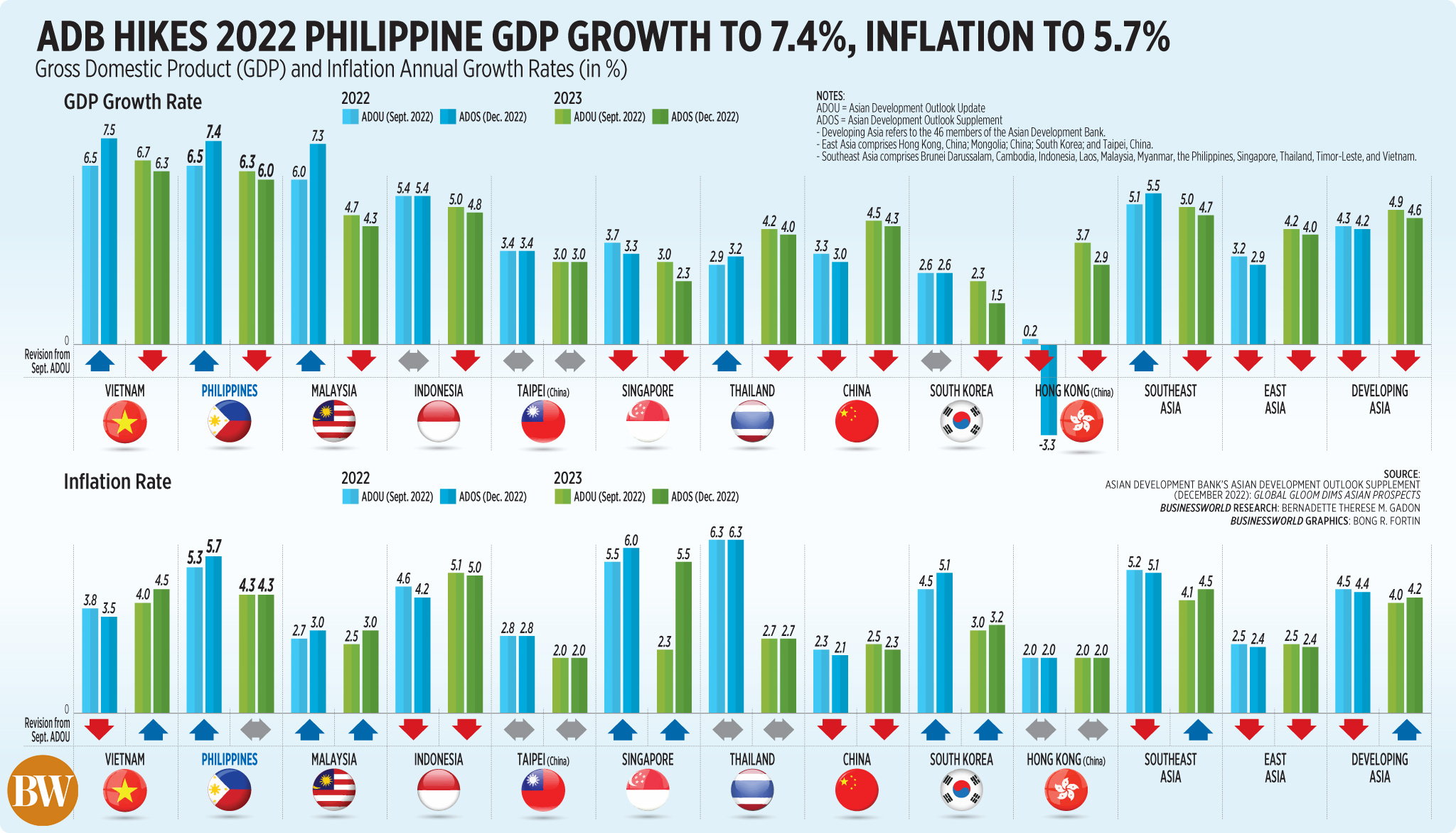 THE PHILIPPINES is expected to be the second fastest-growing economy in Southeast Asia this year and in 2023, despite global headwinds, according to the Asian Development Bank (ADB).

In its Asian Development Outlook (ADO) 2022 Update released on Wednesday, the ADB revised its Philippine gross domestic product (GDP) growth forecast upwards to 7.4% this year, higher than the 6.5% estimate given in September.

At 7.4%, the Philippines is expected to be the second fastest-growing economy in Southeast Asia this year after Vietnam (7.5%). This forecast is also above the ADB’s 5.5% growth outlook for the Southeast Asia region, which was raised from 5.1% in September.

“The Philippine economy has shown strong underlying growth momentum and resilience in 2022 and this is expected to continue in 2023, with GDP growth converging towards its longer-term growth rate of about 6%,” ADB Philippines Country Director Kelly Bird said in a statement.

The ADB lowered its GDP forecast for the Philippines to 6% for 2023, from 6.3% previously. This is at the low end of the government’s 6-7% target for next year.

The ADB’s 6% forecast for the Philippines in 2023 is the second-fastest among Southeast Asian economies, following Vietnam’s 6.3%. This is also above the ADB’s 4.7% outlook for Southeast Asia next year, which was downgraded from 5% previously.

“There are downside risks to growth in 2023, including inflation stickiness, further increases in interest rates, and a sharper-than-expected slowdown in GDP growth in advanced countries,” Mr. Bird said.

The multilateral lender said Philippine inflation is expected to average 5.7% this year, up from the September estimate of 5.3%, before slowing to 4.3% in 2023.

At a briefing, Mr. Bird said core inflation is now peaking in advanced economies, but the Philippines may be two quarters behind.

Headline inflation accelerated to 8% in November from 7.7% in October. For the 11-month period, inflation averaged 5.6%, still lower than the central bank’s 5.8% full-year forecast but well above its 2-4% target.

Core inflation, which excludes volatile prices of food and fuel, climbed 6.5% in November from 5.9% in October. In the months to November, core inflation averaged 3.7%.

“So we might expect inflation to peak soon and start to hopefully gradually decline in two to three years. I remember that the central bank recognizes this concern and they have been very proactive in their response,” Mr. Bird said.

The Bangko Sentral ng Pilipinas (BSP) has hiked policy rates by 300 basis points and is widely expected to raise it by 50 bps today (Dec. 15).

The ADB trimmed its GDP projection for developing Asia to 4.2%, from its 4.3% projection in September.

For 2023, the multilateral lender cut its growth outlook for developing Asia to 4.6%, from 4.9% previously.

“Asia and the Pacific will continue to recover, but worsening global conditions mean that the region’s momentum is losing some steam as we head into the new year,” ADB Chief Economist Albert Park said in a statement.

“Governments will need to work together more closely to overcome the lingering challenges of COVID-19, combat the effects of high food and energy prices — especially on the poor and vulnerable — and ensure a sustainable, inclusive economic recovery.”

Despite the lower forecasts, the ADB said developing Asia will still see better growth and lower inflation than other regions

ADB cut its inflation forecast in developing Asia to 4.4% this year, from 4.5% previously.

However, the bank upgraded its inflation projection for next year to 4.2%, from 4% previously “due to lingering inflationary pressures from energy and food.” — Keisha B. Ta-asan

Celebs React To The Tragic Passing Of Stephen ‘tWitch’ Boss


France vs Morocco and other World Cup news