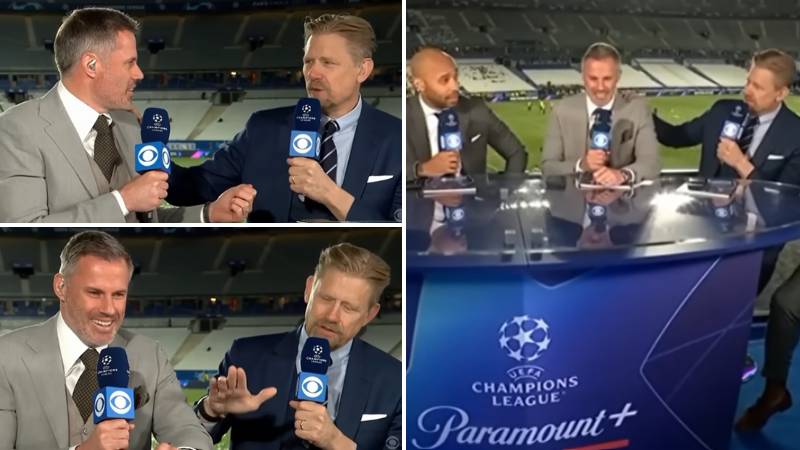 The retired players were covering the final hero in Paris for American broadcaster CBS Sports. Carragher saw his former side lose out on the trophy after a goal from Vinicius Junior and a stellar performance from Real Madrid goalkeeper Thibaut Courtois secured a 1-0 victory for the Spanish champions.

Carragher, in a bid to shake off the disappointment caused by his former side, had a cheeky dig at Schmeichel’s former side, Manchester United.

Abdo asked: “Liverpool are booking their ticket already for next season’s final in Istanbul, what about Manchester City?”

Richards gave a cagey response, he said: “I’m not getting involved in that chat. Game by game. I’m not getting too excited. We’ve been there and lost, semi-final, final the year before so I’m going to be humble this time. “

At this point, Carragher saw this as the perfect opportunity to take a swipe at both Schmeichel and fellow pundit Thierry Henry. He said: “Well it’s not going to be Man United or Arsenal, is it?”

The comment from Carragher made Richards burst out with laughter whilst Henry sat in silence and shook his head, Schmeichel however, was having none of it.

He brutally replied to Carragher: “You’re supporting a really, really good domestic cup team, so just tone it down a little bit – you’ve been cocky all year.”

Henry then chipped in with: “Micah[Richards]you realize [why] I keep quiet? When you can not speak, just do not speak, maybe we will be back one day! ”

A perfectly timed reply from the Manchester United legend after a poor end to Liverpool’s season, they have failed to add to their earlier triumphs in the Carabao Cup and the FA Cup. Despite the disappointing end, this season has been a success for Liverpool and Jurgen Klopp, who has now won all of the major trophies available for him at Liverpool.

Liverpool will now head into a potentially busy summer transfer window with rumors circulating about Sadio Mane’s future, and the Reds will for sure be looking to add more quality into their squad in order to make sure they are challenging in all competitions again next season.