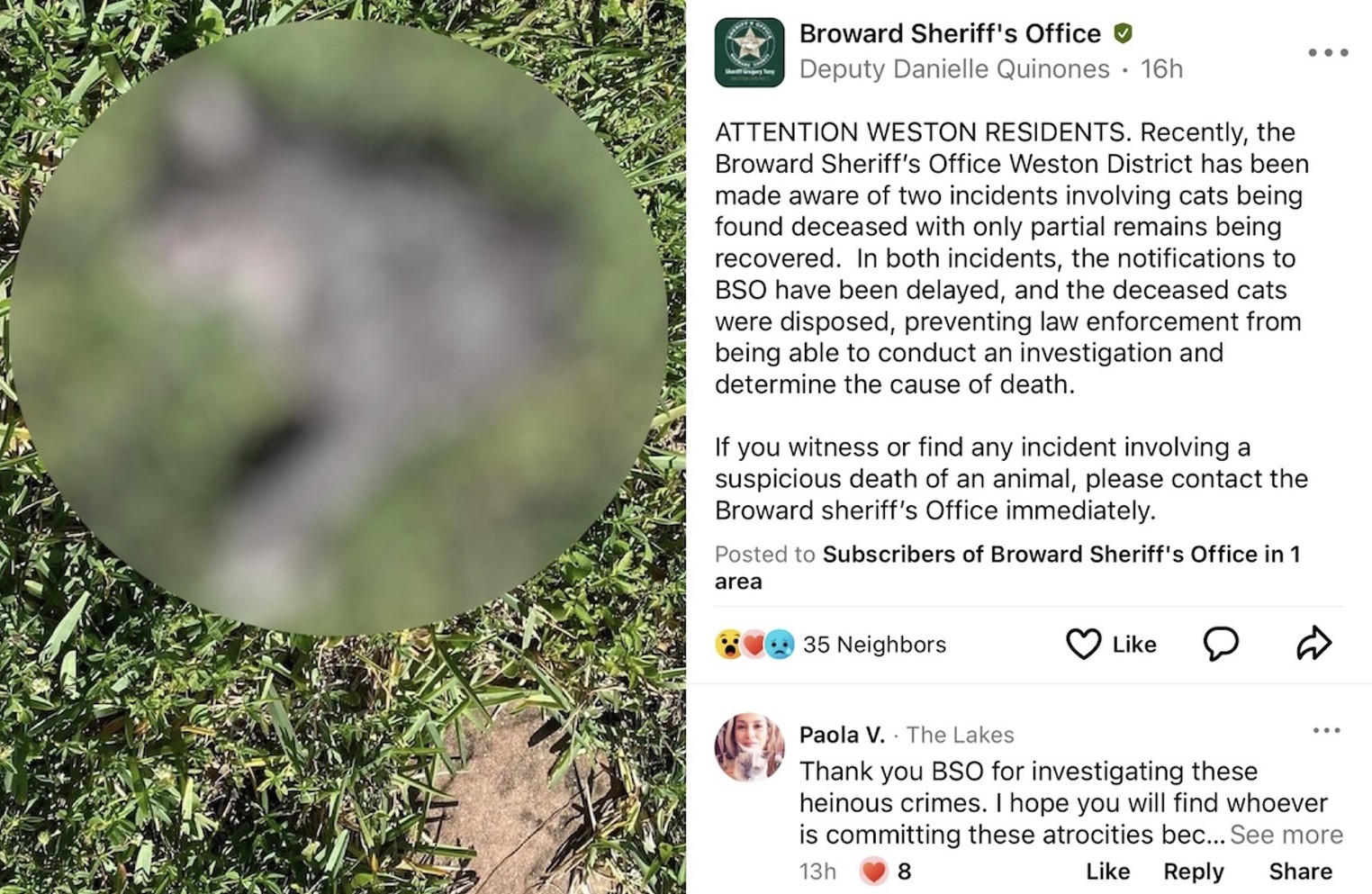 When Sergio Rodriguez’s family found their cat, Bean, dead in their Weston neighborhood last week, they only recovered half of him.

As Rodriguez described the incident in a Facebook post, only the front portion of the cat’s small, furry gray body was there in the grass – severed with seemingly surgical precision.

Neighbors told Rodriguez this was not the first time a feline had been found dead and mutilated in the city. In a statement released this week, the Broward Sheriff’s Office (BSO) acknowledged that it was aware of two incidents (including Bean’s demise) involving the discovery of partial remains of dead cats in Weston and implored residents to report any other suspicious animal deaths in the area.

The mysterious feline fatalities set off a panic among residents of the planned community, which borders the boggy Everglades in western Broward County. Some speculated the killings were the work of a budding serial killer; others suggested a troubled child or potential future school shooter was to blame.

The BSO concluded in an official report obtained by Local 10 (WPLG-TV) that the injuries to the other dead cat were likely intentional and did not appear consistent with an animal attack.

“The cat appeared to be cut clean through the middle,” Local 10’s story quoted the incident report. “The cut is not consistent with that of animal bites / attacks and appeared to be intentional. There was no blood on the cat or in the grass surrounding the cat. The back half of the cat was not present in the photograph.”

The sheriff’s office report noted that because the physical remains were not turned over to the police, a necropsy was out of the question and it was impossible to know for sure what happened.

The BSO finding does not sit well with local wildlife expert Robert Ruderman, a specialist in human wildlife conflict resolution who has responded to thousands of animal-related incidents in South Florida over the past 15 years.

Ruderman tells New Times it’s likely that the mutilations were perpetrated by a nonhuman member of the animal kingdom.

“Typically, these are done by animals that are fed regularly, which are dogs and cats,” Ruderman, founder of Humane Wildlife Consulting of South Florida, says. “So it’s very possible that, in my opinion, this was done by a dog or another cat – more likely a dog that was that was loose.”

Recently, the Broward Sheriff’s Office Weston District has been made aware of two incidents involving cats being found …

While aspects of the cat deaths have led some to believe coyotes are responsible, Ruderman disagrees, explaining that a coyote typically consumes its kills in their entirety rather than leaving part behind. Coyotes, he adds, are omnivorous and are far more apt to eat rodents than cats.

He does, however, note that domesticated cats or dogs could end up as coyote prey if the wild animal found itself desperate for food.

“If food is incredibly scarce, then they might [kill or eat a domesticated pet] – it’s certainly possible, “he allows.” It is very unlikely in a place like South Florida, where there is plenty, plenty of food for them. “

The typically shy and elusive coyote, whose presence has been documented in all 67 Florida counties, “can and do prey” on domestic cats and small dogs, in attacks that usually occur at night or in the early evening, according to the Florida Fish and Wildlife Commission (FWC). An FWC map, which shows where the agency has received coyote-related calls across Florida, reveals that there have been 23 sightings and other coyote-related incidents in Weston since January 2019, three of which involved the death of an animal.

While it remains unclear who or what was responsible for the recent cat deaths in Weston, this is not the first time seemingly inexplicable feline mutilations have triggered fears of something sinister.

A 2014 New Times Broward-Palm Beach story titled “Someone, or Something, Is Cutting Cats in Half in Central Florida” described how felines were being found cut in half near Orlando with what appeared to be “surgical equipment.” Elsewhere, in 1989, the New York Times noted in “Cat Mutilations Spread Fear of Cults in Suburb” that dozens of dead cats were discovered over a three-month period in the Los Angeles area, “some of them cut in half with what some say is almost surgical precision” – leaving residents worried that a satanic cult or youth gang was to blame.

But in the LA case, local officials performed necropsies on the cats and consulted wildlife experts and concluded that the culprits were most likely urbanized coyotes. A local vet explained to the Times that coyotes will cut a cat in half because they “instinctively go for the soft middle section,” where there are fewer bones.

Anyone with information about the Weston-area mutilations is urged to contact the BSO at 954-321-4231.