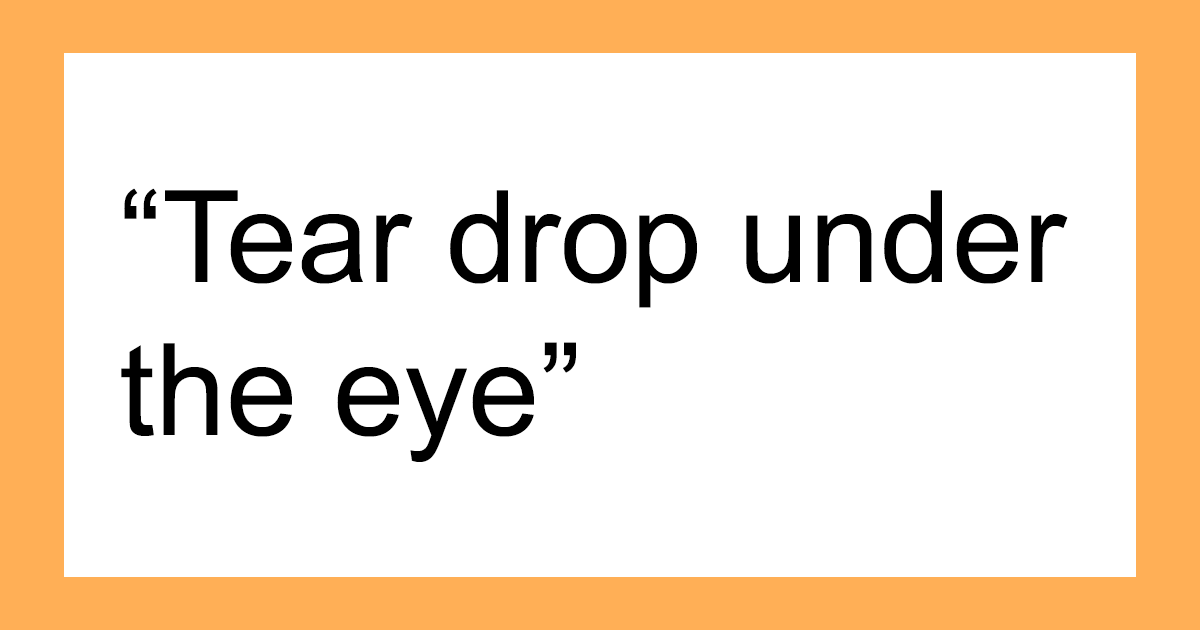 For thousands of years, humans have marked their bodies with permanent designs known as tattoos. They have varied from plain, sometimes elaborate, other times symbolic, but always personal, and these inkings have served as amulets, status symbols, declarations of love, signs of religious beliefs, adornments and even forms of punishment.

No wonder people’s fascination with tattoos remains stronger than ever. While there’s still some stigma about them in our society, a more progressive approach to our bodies, identity, and self-expression is emerging.

At the same time, some people are slightly more skeptical towards body art. They even claim that particular designs, symbols, and body areas where a tattoo is placed can be read as a warning sign. “What sort of tattoo on someone is a major red flag for you?” someone asked on Ask Reddit, and we looked at what people had to say. Let us know if you agree or disagree with them in the comments!

We also reached out to Alex Alvarado, a tattoo artist at Santo Cuervo studio, and Adam, the studio manager at Vagabond Tattoo based in East London, who shared a couple of insights into tattoo art from the experts’ perspective.

According to tattoo artist Alvarado, you can tell a lot about a person from their tattoos. “I’d venture to say you could even guess nationality based on what style of tattoos they have, but the most obvious answer to me would be how much they have (or haven’t) invested in their tattoos,” he said.

Alvarado argues that this isn’t only monetary investment but also in terms of research, time, and dedication. “Getting a good tattoo is sometimes a very multi-faceted process that could even include travelling to see a specific artist. Things like this can tell you how knowledgeable, patient and committed a tattooed person can be.”

Frankly, I only judge people for racist tattoos. I don’t care otherwise nor do I care where people put their tattoos.

I do tend to judge people with bad tattoos but solely because it generally means a) you didn’t care to do your research or b) you’re a cheap f**k. But I try not to just for the few people out there that got scammed by someone saying they were something they weren’t.

And when it comes to the tattoo trends, Alvarado said that there are a multitude of them going on right now and it would depend on where you live, mostly.

“Custom lettering seems really popular at the moment. I’ve seen a lot of very delicate, very intricate Korean-style tattoos lately, and on the opposite end of that, there’s a lot of heavy blackouts going on as well, but it seems all styles seem to be flourishing and being taken to the next level all over the world.” He added that he is mainly a realism artist “and the art I see on social media nowadays usually leaves me in total awe!”

And when it comes to tattoos that seem to be out of fashion, Alvarado said that from what he can see, the ’90s tribal style is definitely on its way out. “The majority of cover-ups we’ve done at my studio usually involve some sort of tribal that the client got ages ago when they were ‘cool’ but no longer reflects their taste and personality. But with trends being so cyclical, who knows, maybe tribal will come back in a big way soon!”

Meanwhile, Adam, the studio manager at Vagabond Tattoo parlor, argues the opposite. He believes that tattoos don’t really say anything. “There are so many different styles out there at the moment and it’s so varied that you have people with different styles tattooed on them.” Having said that, Adam added that “one thing I would say is that if someone has a body suit or a large-scale piece, then they are a committed, dedicated person!”

When asked what kind of tattoos have been trending lately, Adam said it’s tribal tattoos that are having a comeback at the moment, but in a new form. “I’ve seen lots of biomechanical-esque tribal recently, so that may be a new trend.” Moreover, Adam said that “the ‘fine line’ style is probably the most popular but I don’t think anything is the least fashionable right now,” when asked about tattoos which have gone out of style.

The number 88. It’s used in the Aryan Brotherhood as an abbreviation for Hail Hitler (explanation: H is the 8th letter of the alphabet)

As the Covid-19 pandemic is over and people are getting back to their normal lives, you may wonder if the initial pandemic-induced surge in people’s interest in getting some ink is over. However, Adam said they have been pretty consistent throughout the pandemic and post-pandemic. “I’d say once we came out of each lockdown was the busiest time period with people wanting to get a tattoo,” he added.

Tear drop under the eye

And now that the summer heat is sizzling and everyone’s getting into the beach mood, more people than ever are willing to get themselves a piece of body art. “Summer is always peak tattoo season! As soon as you start showing more skin, then all you see is the empty space,” Adam told us. However, he added that it’s probably the worst time to get a tattoo in terms of healing, but it’s definitely their busiest time of the year.

Comedy and tragedy masks. First three people I hooked up with had them in places you couldn’t see with clothes on.

Apparently I have a type.

If I unwrap another human and find one, I may faint.

Brand logos of any kind. If you like any corporation enough to get their logo tattooed on you, I’m guessing we have some major ideological differences.

my coworker married another coworker.. Prior to that wedding.. he asked her to prove to her how much she loved him. So she got a tattoo on her neck with his last name on it.–BIG artistic letters.

Now.. mind you.. this man is a douchebag and a half. and they have “issues” in their marriage.. that tattoo just proves how much self love she had for HERSELF.. which is absolutely 0.

Now before any of you comment let me tell you what she is like. She’s very introverted and never speaks up. this guy controls what she eats, what she wears, and he has no shame in telling us to shut the eff up, if we stick up for her… and HR doesn’t do anything about it.

This girl still sticks with him. When we ask her why.. she gets quiet and says.. she doesn’t have a car and begs us not to get involved.

SO seeing their partner’s name on a very clearly visible area while the partner does not have any tatz is a major red flag.

eyeball. As in having your eyeball colored permanently. No, just no. Use cool contacts. Dont take the chance of blinding yourself.

I used to work at an all purpose gas station in Pittsburgh, and was constantly told about a customer who had our store logo tattooed on his arm.

Didn’t make me proud, made me feel like I was joining a very corporate cult.

I think this might just be an Australian thing but having the southern cross tattoo anywhere is a red flag.
Don’t know why it’s specifically the southern cross but holy s**t every person I’ve ever met with that specific tattoo has been a walking red flag

I’m nobody’s idea of a love god, but I’m reasonably capable of finding your happy spots without garish billboards to guide the way. You’re a partner, not a cheesy amusement park.

A few encouraging words and movements is more than enough.

Being a tattooist for 11/12 years. Really in my eyes it’s usually people with not well done house tattoos who throw up the most red flags.

In no way am I trying to say house tattoos are bad what I’m saying is the sense of self entitlement and the need to have it done then and there breeds a different type of client that is usually rude or is an a*****e in my experience.

Any symbols of Soviet Union or other socialist countries. Portraits of Marx, Engels, Lenin, Mao etc. The red flag with hammer and sickle of course too.

The old feather and infinity symbol is mostly a giveaway for being a bit uninspired.

Name tattoos are generally distasteful. You really couldn’t think of a different way to honour your loved one? Knew a guy who had “family” written in a huge terribly overstated script across his forearm… what, like you’re gonna forget?

ETA if you want to honour someone, get a symbol for them or smth that you actually put some thought into. It’s just the effortless name tattoos that get to me

Om symbol- not hating because I imagine a lot of people have one, but I feel like the person is very clearly telling me not to hang out with them lol.

Anything that’s trending. Trends DIE. It tells me that the person isn’t willing to put anything unique on their body & they just want to follow with what’s cool right now. For example people who get clocks, eyes, lions, etc.. are probably the same ones who would’ve gotten tribal tattoos back in the 90’s-00’s just because it was cool at the moment. I dont have any hate towards these tattoos by the way. They look nice.. its just people get them because its trending.. so to me that’s a red flag to permanently put something on yourself just because its trending at the moment. Also anything with your ex’s name.

edit: need to clarify it’s not HP that makes me cringe it’s the death eater specifically

Clock tattoos. Especially if it comes paired with roses or a lion. It a very specific tattoo but the people who get them are always so rude.

I knew a girl whose initials were VW and she had a Volkswagen logo tattoo. She was obsessed with their cars too; she didn’t just get the tat because of her initials.

Getting the generic lion with crown and hourglass or pocket watch, just like the wolf and the owl…

this seems to be an unpopular one and may just be from personal experience but full or half sleeves of one particular fandom/media. Never met someone who commits that hard to harry potter and isn’t a bit off somewhere else

Nightmare before Christmas tattoo because you know their going to be very annoying.

Met, maybe half a dozen men and women with one.

All bats**t, and unapologetic entitled about it…