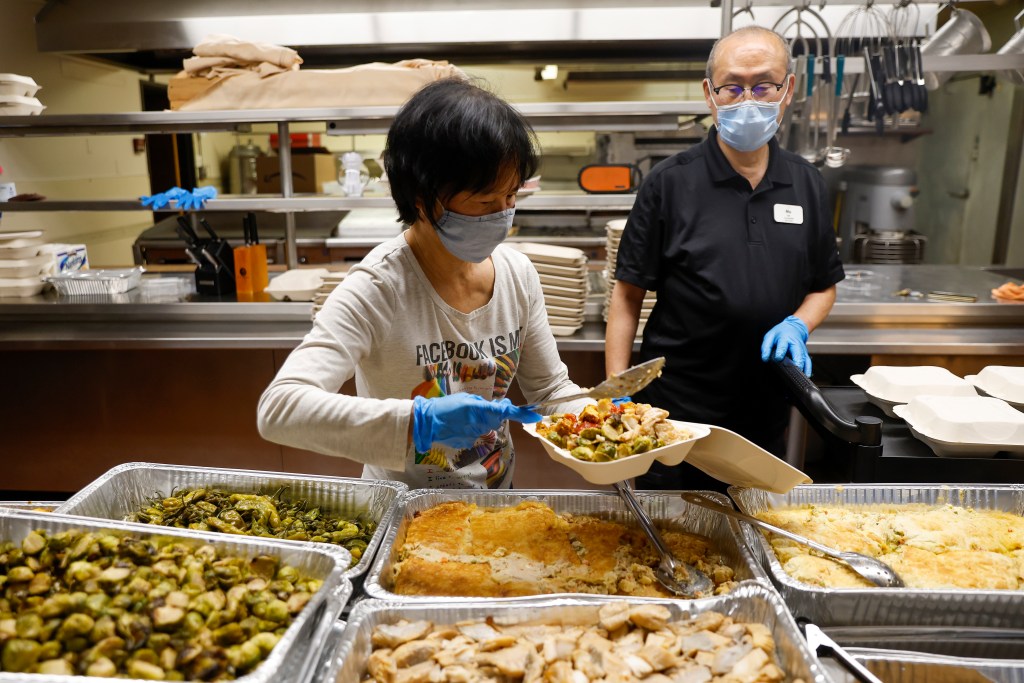 Parked outside a loading dock on LinkedIn’s sprawling Sunnyvale campus, León and his wife, Marie Pham, arrived to pick up leftovers that were weighed, packaged and donated after tech employees had their fill of the 1,050 pounds of protein and 630 pounds of vegetables chefs spent four hours prepping for lunch — free of charge.

The duo are volunteers with Peninsula Food Runners, and that day’s assignment was Life’s Garden Apartments, a senior affordable housing complex only 10 minutes down the road.

“We live in such a wealthy area,” León said, “but food insecurity is just a hop and a skip away.”

In 2021, Peninsula Food Runners moved more than 3 million pounds of food to hundreds of organizations across Santa Clara and San Mateo counties.

Starting with two donors and 40 volunteers in 2013, the nonprofit has since created a system — almost like a relay race fused with a delivery app — that passes along trays of vegetables, entrees, beverages and desserts like batons to prevent food from wasting away in trash bins and dumpsters.

The goal is to help the roughly 8 million Californians — 1 in every 5 people — who lack consistent access to food.

Peninsula Food Runners is hoping to raise $30,000 through The Mercury News’ annual Wish Book program to hire more staff to increase the nonprofit’s delivery capacity by recruiting more volunteers, connecting with more donors who have excess food and adding at least 1,000 new recipients to the program.

This effort will be especially vital as SB 1383 — a 2016 bill that aimed to reduce waste and climate impacts — started requiring businesses this year to take part in food recovery programs. The goal is to recover 20% of all edible food that otherwise was destined for landfills by 2025.

At Life’s Garden, more than 200 low-income seniors who are living with limited mobility, ability and money lined up for to-go boxes of LinkedIn’s leftovers. Nina Tan, resident activities director at the housing complex, said these donations help provide meals that residents may not otherwise have access to — physically and financially.

“It doesn’t matter what it is, whatever I am able to get for them I’m just happy, because I know they need it,” Tan said. “This food cooked for employees would otherwise be wasted. You are feeding good food to good people. It’s like a perfect combination.”

“The beautiful thing about our system is it allows people to give as much as they want to — or can — give,” she said. “I asked myself a very simple question: Where are all the people that are in need of food? They’re not just at the shelter, and we know food insecure people sometimes don’t have the transportation to go get their food, so why not bring it to where they’re at?”

Donors range from corporate kitchens at LinkedIn and Adobe and grocery stores such as Trader Joe’s and bustling Asian markets, to nearby school districts, universities and caterers. Local community gardens and farmers markets often chip in excess produce, too.

Since the nonprofit launched, more than 15.4 million pounds of food have been diverted from landfills, providing 12.8 million meals.

Peninsula Food Runners was born after Yap watched food banks in San Francisco dispose of otherwise good products because there wasn’t enough space for storage or distribution. However, many locations where she volunteered would still avoid saying no to donations, even though it didn’t have have the infrastructure to accept everything.

This wanton waste struck a personal chord, she said, after growing up in a poor family in Malaysia, eating without complaint what little her single mother could provide Yap and her seven siblings.

Knowing that many people who are food insecure do not always use food banks, Yap said she started Peninsula Food Runners almost a decade ago to turn her frustrations into connections.

“People who are food insecure are often people that still have a roof over their head, but no food in the fridge,” Yap said. “Over the years, I’ve learned that there’s more than enough food to go around. If people are starving and don’t have access to food, it’s because of bureaucracy in our systems. We wait for people to fall off the cliff before we give them a lifeline.”

That lifeline is even more important as the pandemic and inflation in food, gas and housing costs are effectively shrinking many residents’ paychecks.

Yap likens the current food distribution ecosystem to a school playground; if the older kids have the resources to control all of the kickballs during recess, the younger kids have to ask to play, which can create power structures and resentment. Instead, she’s trying to add more kickballs to the school’s supply, so everyone can get their own ball to play with, which is easier to manage.

“People need food,” Yap said. “You just have to get it in the right hands.”

THE WISH BOOK SERIES
Wish Book is a 501(c)(3) nonprofit organization operated by The Mercury News. Since 1983, Wish Book has been producing series of stories during the holiday season that highlight the wishes of those in need and invite readers to help fulfill them.

HOW TO GIVE
Donate at wishbook.mercurynews.com or mail in the coupon.


SA20 2023 | Tournament would be one of the bigger events in franchise cricket, claims Quinton de Kock