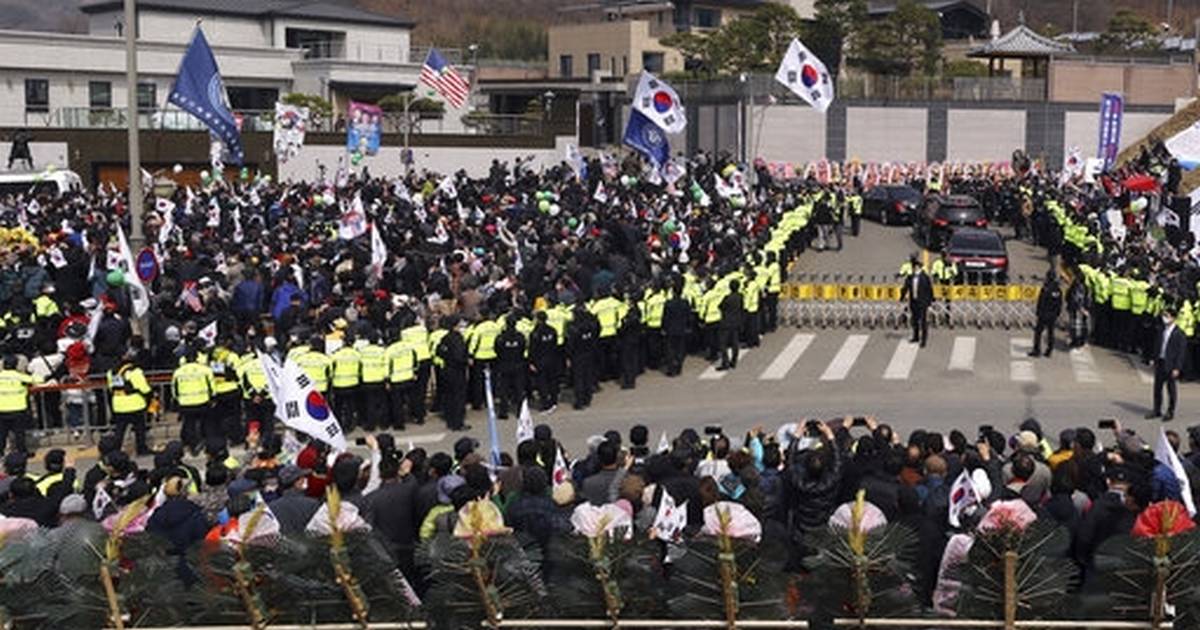 SEOUL, South Korea – Three months after being pardoned for one of South Korea’s worst government-corruption scandals, former President Park Geun-hye was finally going home Thursday after being released from a hospital.

She slowly walked out of Samsung Medical Center in Seoul as cameras flashed and dozens of supporters shouted: ‘President! President! ‘

‘I express my greetings to our people for the first time in five years. My health has really improved, thanks to your worries, ‘Park said. She thanked the hospital’s medical staff and stepped into a black sedan without taking questions.

She then stopped by a cemetery and offered flowers and incense at the grave of her father, slain military dictator Park Chung-hee, and bowed quietly in tribute. She then headed towards her newly built residence in the southern city of Daegu, where supporters laid wreaths of flowers and a huge national flag near her home.

Park was ousted from office and imprisoned for bribery and other crimes in 2017 in a stunning fall from grace. She has described herself as a victim of political revenge and refused to attend most of her trials.

Conservatives, who were initially left in disarray by her downfall, recovered to narrowly win this month’s presidential election, but only after fielding a candidate who had helped send her to jail.

President-elect Yoon Suk Yeol was part of a special investigation team that indicted Park in 2017 for bribery, abuse of power and extortion, which established her as the central figure in an influence-peddling scandal that also involved a shadowy confidante and a billionaire Samsung heir.

Yoon became prosecutor general under current liberal President Moon Jae-in, who won the election to succeed Park in 2017, but Yoon resigned and joined the opposition last year following infighting over probes of Moon’s allies, which made him a sudden conservative hero.

Yoon, who takes office on May 10, wishes for Park’s quick recovery from her health problems, his spokesperson, Kim Eun-hye, said after her release.

Park had served less than a quarter of her 22-year sentence before Moon pardoned her in December, citing her health problems and a need to promote unity in the face of pandemic-related difficulties.

She had been treated at the Seoul hospital since November. Officials have refused to elaborate on Park’s health, but local media said she has been suffering from a lumbar disc problem, a shoulder injury and dental problems as well as mental stress.

Park was once the darling of conservatives in South Korea and was elected its first female president in 2012 by beating Moon by a million votes.

Park was propelled by conservatives who celebrate her father as a hero whose industrial policies pulled the country up from postwar poverty despite his brutal suppression of human rights.

She was impeached by lawmakers in late 2016, and was formally removed from office and arrested the following year over the corruption scandal that prompted months of massive street protests.

Among the main charges she faced was collusion with her longtime confidante, Choi Soon-sil, to take millions of dollars in bribes and extortion from some of the country’s largest business groups, including Samsung, while she was in office.

Dozens of high-profile figures were convicted, including Choi, who continues to serve an 18-year prison term.

Samsung scion Lee Jae-yong was initially sentenced to five years in prison on charges that he offered millions of dollars in bribes to Park and Choi while seeking government support for a 2015 merger between Samsung affiliates that cemented his grip on the country’s largest business conglomerate.

Lee later saw his term reduced before he was released on parole in August last year as the Moon’s government cited unspecified concerns over the economy, a move that extended the country’s history of leniency toward major white-collar crime and preferential treatment for convicted tycoons.