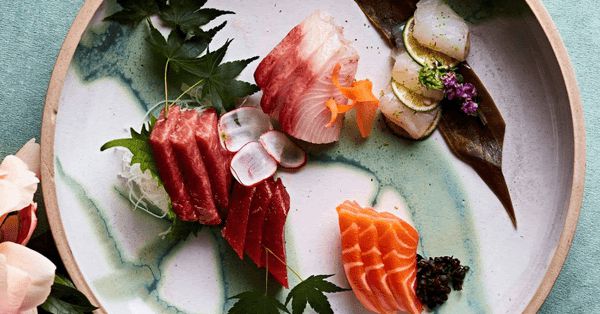 A Very Mayfair Restaurant will open in Mayfair this September, as the restaurateurs behind Jamavar, MiMi Mei Fair, Bombay Bustle, and Socca will open what they are referring to as an “izakaya” in the former US Embassy on Grosvenor Square. In reality, father-daughter duo Samyukta and Dinesh Nair will aim to replicate a series of successful Mayfair – Sexy Fish, Nobu – restaurants and play safe with expensive cuts of lean grilled meat, good raw seafood, and a surfeit of citrus-based seasonings . This is lowest common-denominator dining in the highest of high net-worth neighborhoods.

KOYN, first revealed by the Evening Standard, is described as “a modern Japanese restaurant inspired by the nature-spirited roots and duality of Mount Fuji.” An establishment which “will adapt Japan’s ancient appreciation of balancing modernity with tradition alongside simplicity and harmony into a two-fold contemporary dining experience.” An izakaya – essentially a pub and grill – this is not.

For clarity, it’s worth including the restaurant’s rationale – issued in a press release – in full.

The Nairs and their designer, Tom Strother of Fabled Studio, will seek to “symbolize the complementary forces at play in Japan’s enigmatic volcano, where a lush alpine environment peacefully co-exists with the fires raging below. This balance between calm and volatile energy will be reflected in the two distinct yet streamlined ~ spheres ~ of the restaurant. ”

First, “Midori”, the green room, “inspired by the landscape of Japanese zen gardens and the striking pink moss growing on the fertile volcanic soil of Mount Fuji” and “representative of vegetative life on the snowcapped peaks”. This sits above Magma – or “the charred room, representing an active, bubbling volcano.”

On the pans is chef Rhys Cattermoul, who, naturally, will contrive a menu inspired by the “natural duality” underpinning the restaurant “to showcase the broad spectrum of Japanese cuisine through rich umami flavors and locally sourced produce.” Cattermoul is from Auckland in New Zealand, and apparently discovered his passion for food whilst briefly working at Michelin-starred restaurant the Greenhouse, which was among the most high-profile casualties during the COVID-19 lockdown in 2020.

He later worked at Nobu, where he eventually became head chef, before moving to run Nobu in Hong Kong. At Koyn, Cattermoul will create plates like steamed clams ‘nabe’ with cordycep mushroom, yuzu sake soy, as well as red mullet tempura with yuzu kosho tosazu and homemade kombu salt.

Samyukta Nair said in a statement that she was “thrilled to be carving our own unique perspective on Japanese cuisine with KOYN. I have long admired Japan for its understated elegance, expertly-made craft and philosophy that balances modernity with tradition.

“While working with Rhys on this project I’ve been able to get a deeper understanding of Japanese culture through our food journey.”

Meanwhile, on the lower ground floor is where guests can find “Magma,” a room described thus: “an immersive subterranean space enveloped within the dark volcanic heart of Mount Fuji.”

It is here that traditional binchotan-charcoal-fueled robata grill, crafted from black slatted timber and rainforest marble, of course. This focal point will be lined with burnt orange leather stools, from which guests “are close enough to feel the heat of the flames.” (It is not clear whether the leather stools are in fact actually burnt.)

Nevertheless, hyper specificity and bamboozlement is the name of the game here, too where dishes will include the likes of hojicha-smoked lamb marinated with spicy kuromame miso; or hispi cabbage grilled with homemade koji dressing; as well as wagyu ishiyaki, served on a sizzling hot stone.

Check back for a dispatch from the hot stools in the autumn.