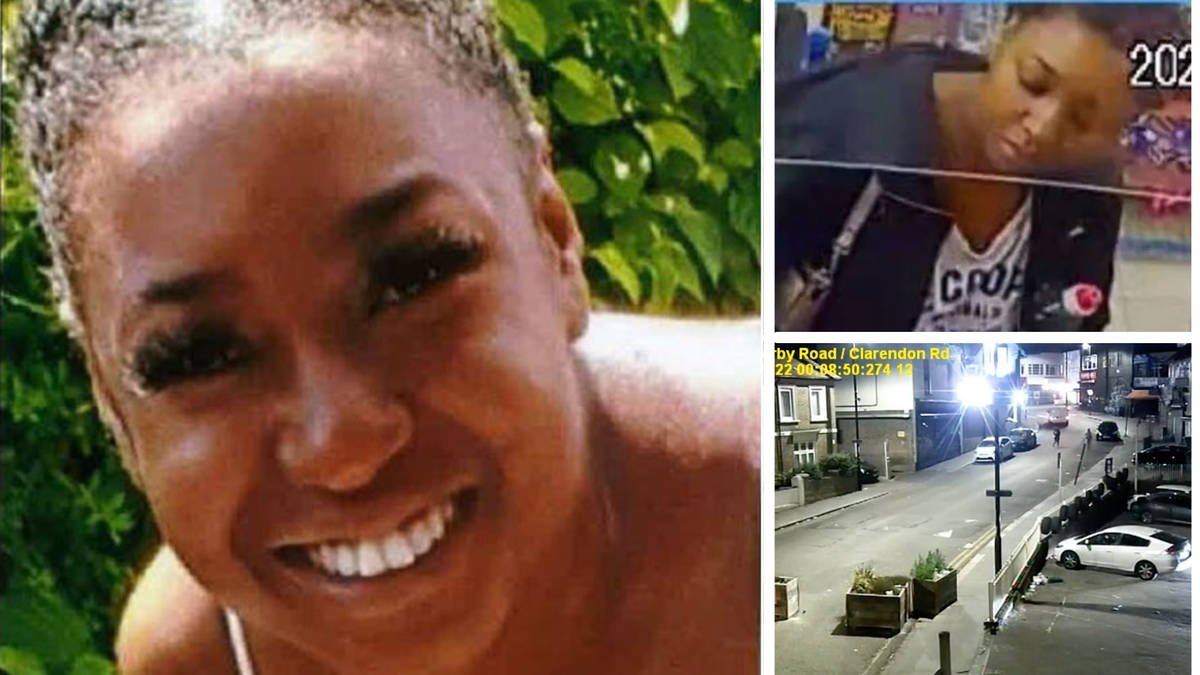 Detectives searching for student nurse Owami Davies have released a CCTV image from the night she went missing as they began searching a south London home.

Police said today they had arrested a third man on suspicion of murder, however they said the investigation remains a missing persons investigation.

Two gazebo tents have been erected at the side of a house on Derby Road, West Croydon, and the window in the front door has been smashed.

In a statement issued through police, Ms Davies’ mother has pleaded with her to come home, saying she is “so very worried”.

Read more: Two arrested on suspicion of murder after student nurse, 24, goes missing for a month

Speaking outside Scotland Yard, she said she was “a desperate mother at the mercy of anyone who knows” anything about her daughter’s whereabouts.

“I am begging, I am asking for the public’s help, from the people, to say if you know, if you have heard or seen her, or she passed you, please speak up… I sit here as a desperate mother at the mercy of anyone that knows or heard something to help me find my baby, that’s all I’m asking, just help to find her.”

“We miss her so much, her brothers and myself miss her, need her,” she went on.

“We are not complete, we just want her to come home.”

She said her daughter was “really happy”, had about two months left of her studies and recently secured a job with Guy’s and St Thomas’.

She said Ms Davies had worked in A&E during the Covid-19 pandemic and was interested in doing research on diseases.

Her mother said they had holidays planned to Spain and Disneyland Paris, saying her nickname is “Princess” due to her love of Disney.

“We had so many things on our calendar that we still needed to do,” she said.

“She’s a lovely person. Owami’s caring, she likes to help. She doesn’t hold grudges. She loves her brothers, she dotes on her brothers. She loves me. As much as we love her.”

Owami left her family home on Monday July 4 and was last seen just after midnight on Derby Road, West Croydon, on Thursday July 7.

The Met have released images of her on the night she was last seen, in a shop and walking down the road – in the hope the public will be encouraged to come forward with information.

In particular, officers are keen to speak to the driver of a white van that was parked on Derby Road.

Ms Davies was in the company of a man and crossed the road just as the van pulled out.

Police believe the van driver would have had a good opportunity to see them both clearly and officers are appealing for this possible witness to come forward.

Ms Davies’ mother Nicol Davies said: “There are many friends and family who love and care for Owami and all of them want to see her safe return.

“Owami – if you see this appeal please believe you are not in any trouble, we just want you to come back to us.

“Please leave a message if you can to let us know you are okay, we are so very worried about you.

“This is such a terrible time for all those who love Owami and I am pleading for anyone who can help find her to contact police.

“Every day we hope to hear the news that Owami is coming back to us, your help might make it so.”

On Monday two men, aged 27 and 23, were arrested in the Croydon area on suspicion of murder.

A 32-year-old man was arrested on suspicion of murder on Tuesday, 2 August at an address in South Croydon.

They were taken to a south London police station where they all remain in custody.

Any witnesses or anyone with any information is asked to call police on 101 or contact via Twitter @MetCC quoting reference 22MIS025307.

To give information anonymously contact Crimestoppers on 0800 555 111 or online at crimestoppers-uk.org.