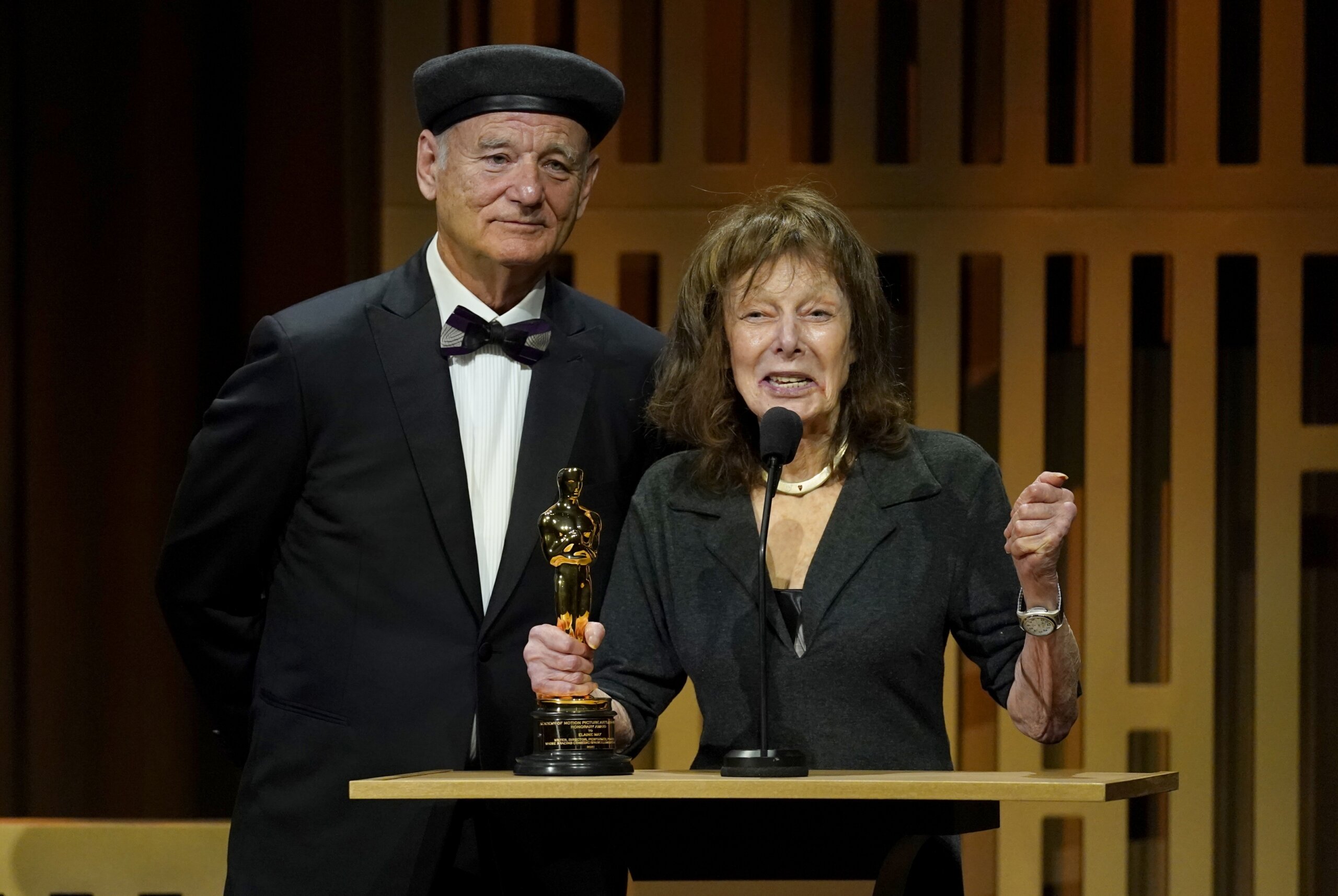 LOS ANGELES (AP) – Elaine May was the last to arrive and the first to leave at the Governors Awards on Friday in Los Angeles.

Her fellow honorees, Samuel L. Jackson, Liv Ullmann and Danny Glover, all arrived hours earlier, each holding court at the Ray Dolby Ballroom, posing for photos and enjoying their moment amid the lead-up to the 94th Academy Awards.

It was a celebration, after all. They were about to get something for the first time in their long Hollywood careers: An Oscar statuette of their own.

Jackson, whose right foot was in a walking cast boot and his left in a black velvet slipper, sat at the base of an oversized Oscar statuette as everyone from Quentin Tarantino to Magic Johnson came over to congratulate him.

But May, the 89-year-old writer, filmmaker and comedy legend, walked into the Ray Dolby Ballroom arm in arm with Bill Murray long after attendees had finished their chicken pot pies, accepted her honorary Oscar with grace and wit, then departed soon after – still linked to Murray.

Yes, it’s the kind of move that could upend a live broadcast. But at the Governors Awards, there are no television cameras. Everyone is simply delighted to be celebrating living legends who are long overdue for their Oscar moment. With beautiful clip montages and emotional tributes – from the likes of Denzel Washington for Jackson, John Lithgow for Ullmann, and Alfre Woodard for Glover – it’s the kind of show that reminds you why you love movies and the people who make them.

The Governors Awards is often a stop for Oscar hopefuls on the campaign trail, but this year’s ceremony was delayed because of the pandemic. Though less star-studded than usual, there was also a silver lining to hold the event after Oscars voting had ended: The focus stayed squarely on the honorees and their legacies.

Murray, of course, was there to fete May, a two-time Oscar nominee for writing “Heaven Can Wait” and “Primary Colors.” He ignored the teleprompter speech and praised, “The most attractive, intelligent woman I’ve ever had the pleasure to work with.”

A highlight reel of her work was played, including her comedy act with Mike Nichols and the films she directed, acted in, wrote and ghost wrote (like “Tootsie”).

Lily Tomlin, Kenneth Lonergan, Billy Crystal and Nathan Lane praised her confidence of tone and how her films, from “A New Leaf” to “Mikey and Nicky,” were all so important and so different from one another.

May – who Lonergan teased, saying she “Gives the best tribute speeches of all time” – kept her moment on stage brief.

“They told me Zelenskyy would introduce me tonight, but thank God they got Bill instead,” May said, referring to Ukraine’s president. She also quipped about the event being held in-person, saying, “I’m afraid of COVID but I think this is very nice.”

It was Jackson’s turn next, and Washington, the only current Oscar nominee in the room, was there to tout his friend’s 152 movie titles, his $ 27 billion at the box office, his “11 times Nick Fury and one time the ‘Django,’ ”And his and his wife’s charitable efforts.

“This thing is going to be cherished,” said Jackson, 73, proudly holding his Oscar and marveling that a little kid with a stutter from Chattanooga, Tennessee, made it this far.

“I got out there to entertain audiences the way Hollywood entertained me,” he said. “It’s truly been an honor and privilege to entertain you.”

Lithgow, in toasting the great Norwegian actor Ullmann, said people often say she had Swedish director Ingmar Bergman to thank for her career. But, he said, “Bergman would never have been called one of our greatest filmmakers without Liv Ullmann.”

The two worked together on Broadway in a production of Eugene O’Neill’s “Anna Christie.”

“I’ve seen a lot of great acting in my day but I’ve never seen anything like that,” Lithgow said.

On stage, Ullmann, who was nominated twice for best actress, for Jan Troell’s “The Emigrants,” from 1971, and Bergman’s “Face to Face,” from 1976, recalled her disastrous first audition for a Norwegian theater school in which she was cut off in the middle of a scene from “Romeo and Juliet” – and the comfort she got afterwards from her grandmother, who nurtured her creative spirit.

In Norway, she said, people aren’t supposed to brag or show off.

“That’s why I brought 20 people here from Norway so they can say, ‘It is true she did get an Oscar,'” Ullmann said.

Glover also kept family and heritage at the forefront while accepting the Jean Hersholt Humanitarian Award. The 75-year-old known for his roles in “Lethal Weapon” and “The Color Purple” has been a progressive activist for many years, advocating for civil rights, working as a United Nations goodwill ambassador and a UN children’s agency ambassador.

His mother grew up in Jim Crow-era Georgia and his father served in World War II before coming to San Francisco, where they both worked for the postal service and instilled civic responsibility in their young son.

“I’m amazingly grateful for this moment,” Glover said, speaking at length about his grandparents’ decision to send their kids to school instead of work.

“I have not referred to the teleprompter at all. Sometimes we as actors get a little lost without a script, ”he said. “But I’m proud to be part of this space and place.”