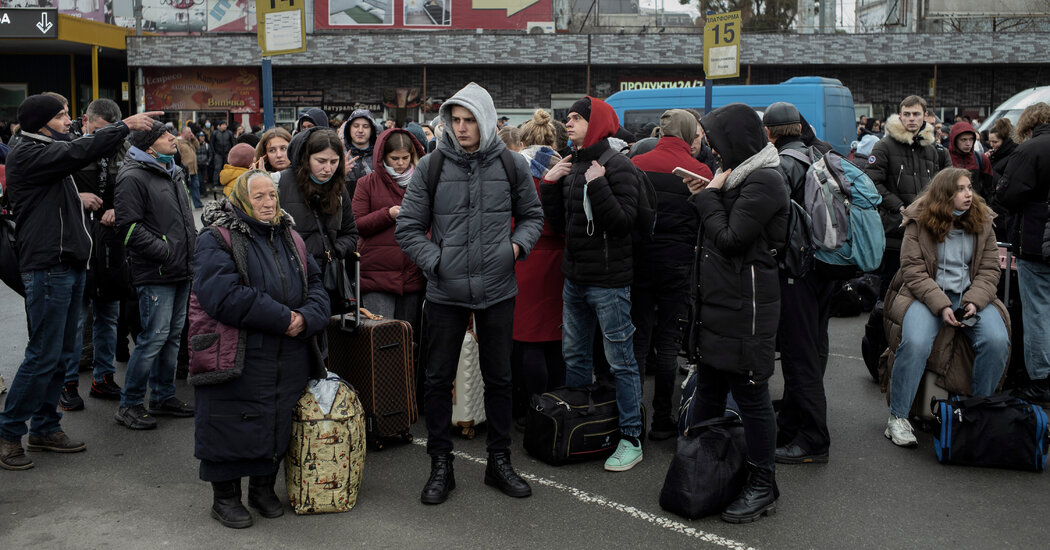 I explained to her, as simply as I could, how to prepare for the invasion. Shelters would be hard to get to with a pet, but she should pack an emergency kit with documents and food. If there’s an airstrike, she should hide in a corridor or the bathroom of her apartment. She seemed to take the information in her stride. “Well, at least we will get to know each other,” she said. “We dog lovers should stick together.”

As I continued my walk, I saw people in all kinds of moods around me. Some of them were arguing while they waited their turn at the gas station. People were driving manically, and cars whizzed through the streets. Whenever there was a loud sound, people looked to the skies, fearing a Russian fighter jet. A young mother stood near her black Jeep, holding her daughter with one hand and talking on the phone. “Yes, mom, we are leaving. We are leaving! ” she screamed.

I hurried home and went online, my internet thankfully restored. Russian troops, I read, had breached Ukrainian borders from Crimea and seized several border towns. Russian tanks had come close to Kharkiv, our second largest city. In a town right next to Kyiv, Russian helicopters attacked the local airport. And Russian forces captured Chernobyl, north of the capital. In the first hours of defending the country, more than 40 Ukrainian soldiers were killed and dozens were wounded.

Their sacrifice was true to our country. In this dreadful time, its fortitude, resourcefulness and spirit of resistance will shine through. Ukraine is ours, no matter what Mr. Putin says. I’m 31, born in the year Ukraine became independent: My adult life has been lived in the shadow cast by Russian aggression. First Mr. Putin annexed Crimea, then he fomented the war in the Donbas that has killed more than 14,000 people. Now the battle for Ukraine has come to a climax.

But it’s about more than Ukraine. It’s a contest between democracy and autocracy, freedom and dictatorship, whose implications will scatter across the world. It’s not our fight alone. So please do not leave us alone to fight it.

Nika Melkozerova (@NikaMelkozerova) is the executive editor of The New Voice of Ukraine, an English-language news site.

The Times is committed to publishing a diversity of letters to the editor. We’d like to hear what you think about this or any of our articles. Here are some tips. And here’s our email: letters@nytimes.com.