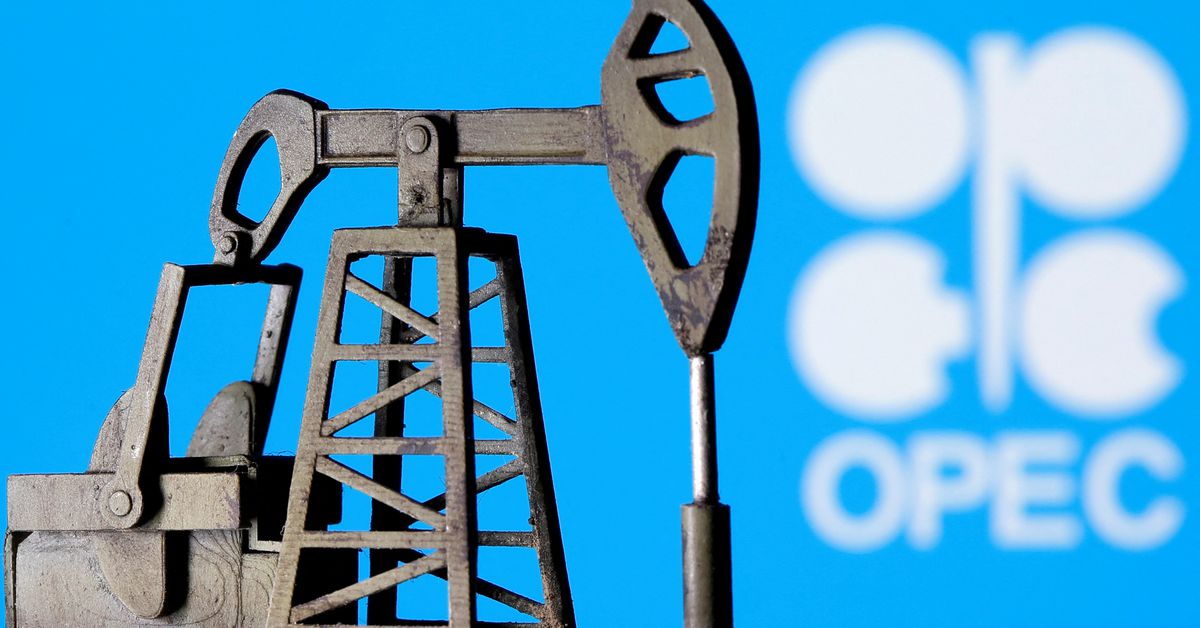 A 3D-printed oil pump jack is seen in front of the OPEC logo in this illustration picture, April 14, 2020. REUTERS/Dado Ruvic/File Photo

NUR-SULTAN/LONDON, Aug 3 (Reuters) – OPEC+ might have to raise oil production to avoid market overheating, OPEC+ member Kazakhstan said on Wednesday, as the group of oil producers meets amid US pressure to add barrels to the market while most members have already exhausted their output potential.

“We have always said that the preferred price corridor is $60-80 per barrel. Today the price is $100. So we might have to raise output to avoid overheating,” Kazakh energy minister Bolat Akchulakov told reporters.

The market has been largely expecting OPEC+ to keep output steady or opt for a slight increase. Three OPEC+ sources said on Wednesday they still saw little chance for an output policy change when commenting on the Kazakh minister’s statement.

The United States has put OPEC leaders Saudi Arabia and the United Arab Emirates under pressure to pump more oil to help rein in prices boosted by rebounding demand and Moscow’s invasion of Ukraine.

US and Western sanctions on Russia have caused prices of all types of energy to soar, resulting in inflation at multi-decade highs and central bank interest rate hikes.

OPEC has been increasing output in line with its targets by about 430,000-650,000 barrels per day a month in recent months and has refused to switch to bigger output increases.

Group sources have cited a lack of spare capacity among members to add more barrels as well as the need for further cooperation with Russia as part of the wider OPEC+ group.

“It seems unlikely OPEC+ will do anything when it meets later today,” said Callum Macpherson from Investec, citing rising concerns about a slowing global economy and a lack of spare capacity.

“OPEC+ is struggling to meet the levels its production limits have now been raised to,” he said, adding that a surprise decision to raise production would put oil under further pressure to fall below $100 per barrel.

Benchmark Brent oil futures fell by more than $1 on Wednesday to trade just above $99 per barrel.

The meeting on Wednesday will discuss production policies from September and possibly onwards starting from 1130 GMT.

By September, OPEC+ was meant to have wound down all of the record production cuts it implemented in 2020 after the pandemic slashed demand.

By June, however, OPEC+ was almost 3 million barrels per day below its quotas as sanctions on some members and low investment by others crippled its ability to boost output. read more

Only Saudi Arabia and the UAE are believed to have some spare capacity left to increase production.

French President Emmanuel Macron has said he had been told that Saudi Arabia and the UAE had very limited ability to increase oil production. read more