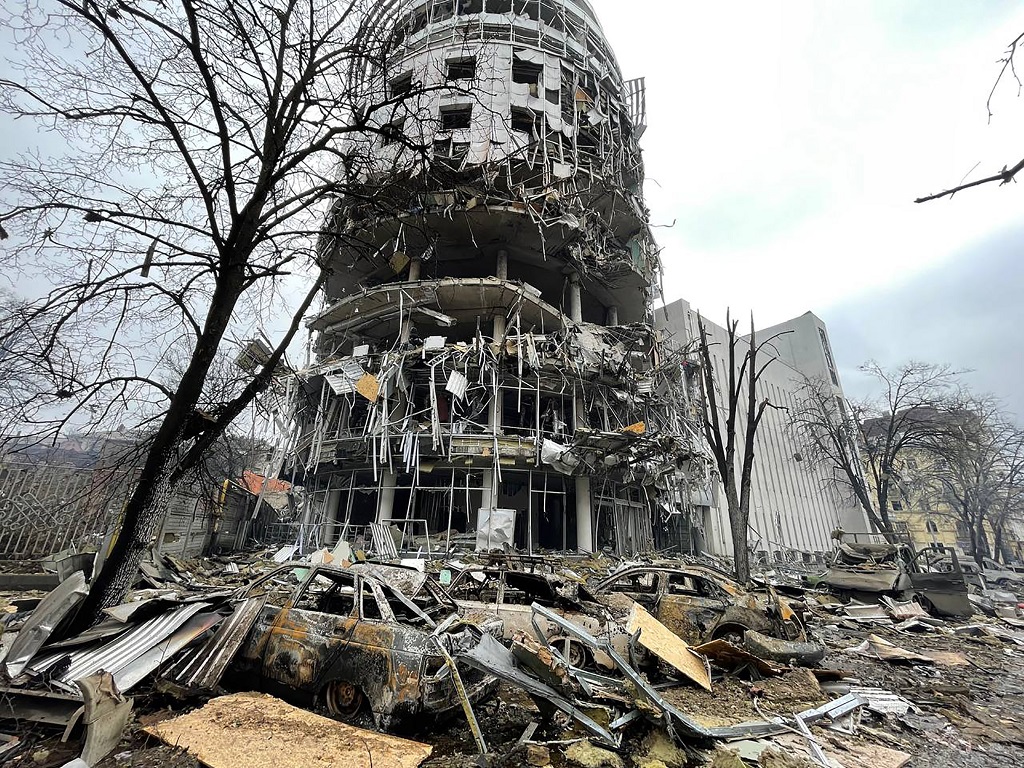 LVIV / KHARKIV, Ukraine / BRUSSELS – Ukraine’s leader called for solidarity on Thursday, a month since Russia’s invasion began, warning he would see who sells out at summits in Europe where bolstering sanctions and NATO is planned but restrictions on energy could prove divisive.

US President Joseph R. Biden has arrived in Brussels for meetings of the alliance, G7 and European Union over a conflict that began on Feb. 24 and has caused more than 3.6 million refugees to flee the country.

Mr. Biden’s visit could also shine light on a dispute with European allies, some of whom are heavily reliant on Russian oil and gas, over whether to impose further energy sanctions.

The issue has been a “substantial” topic and the subject of “intense back and forth” in recent days, White House national security adviser Jake Sullivan told reporters. The United States has already banned imports of Russian oil.

As the humanitarian toll from the conflict continues to rise, driving a quarter of Ukraine’s population of 44 million from their homes, President Volodymyr Zelensky called on people around the world to take to the streets and demand the war end.

“Come from your offices, your homes, your schools and universities, come in the name of peace, come with Ukrainian symbols to support Ukraine, to support freedom, to support life,” he said in a video address.

The United States planned to announce more sanctions on Russian political figures and oligarchs on Thursday, and officials would have more to say on Friday about European energy issues, Mr. Sullivan said.

Ahead of his meeting with Mr. Biden, NATO Secretary-General Jens Stoltenberg said the alliance would boost its forces in Eastern Europe by deploying four new battle groups in Bulgaria, Hungary, Romania, Slovakia.

He repeated his call for a no-fly zone and complained that the West had not provided Ukraine with planes, modern anti-missile systems, tanks or anti-ship weapons.

“At these three summits we will see who is our friend, who is our partner and who sold us out and betrayed us,” he said in a video address released early on Thursday.

Moscow calls its actions in Ukraine a “special operation” that it says is not designed to occupy territory but to destroy its southern neighbor’s military capabilities and capture what it regards as dangerous nationalists.

The West says this is a baseless pretext for an unprovoked war.

Although the Kremlin says its operation is going to plan, Russian forces have taken heavy losses, stalled on most fronts and face supply problems. They have turned to siege tactics and bombardments, causing huge destruction and many civilian deaths.

Kyiv Mayor Vitali Klitschko told reporters on Wednesday that 264 civilians in the city had been killed by Russian attacks. He later said one person was killed and two wounded on Wednesday when shells hit a shopping center parking lot.

US Secretary of State Antony Blinken said the United States had assessed that members of Russia’s forces had committed war crimes.

Mr. Blinken said there had been “numerous credible reports of indiscriminate attacks and attacks deliberately targeting civilians, as well as other atrocities.”

Worst hit has been the southern port of Mariupol, where hundreds of thousands of people have been sheltering since the war’s early days under constant bombardment and with food, water and heating supplies cut.

Satellite photographs from commercial firm Maxar showed massive destruction of what was once a city of 400,000 people, with residential apartment buildings in flames.

A total of 4,554 people were evacuated from Ukrainian cities through humanitarian corridors on Wednesday, a senior official said, considerably fewer than the previous day.

To counter troop shortages, Moscow was moving in fresh units close to the Ukraine border and calling up soldiers who had recently served in Syria, it added in a Facebook post.

As Western leaders prepared to meet, British Prime Minister Boris Johnson said he would push for an increase in defensive lethal aid to Ukraine.

The first US shipment from a new, $ 800-million arms package for Ukraine authorized last week would start flying out in the next day or so, a senior defense official said.

Mr. Putin’s threat to switch certain gas sales to roubles sent European futures soaring on concerns the move would exacerbate an energy crunch and jam up deals that run to hundreds of millions of dollars every day.

Russian gas accounts for about 40% of Europe’s total gas consumption.

Moscow has drawn up a list of “unfriendly” countries which have imposed sanctions. They include the United States, European Union members, Britain and Japan, among others.

“The changes will only affect the currency of payment, which will be changed to Russian roubles,” said Mr. Putin.

Google said in a statement that some people were “having difficulty” accessing the Google News app and website in Russia and this was “not due to any technical issues at our end.”

Earlier the company said it would not help websites, apps and YouTube channels sell ads alongside content that it deemed exploited, dismissed or condoned the conflict. – Reuters