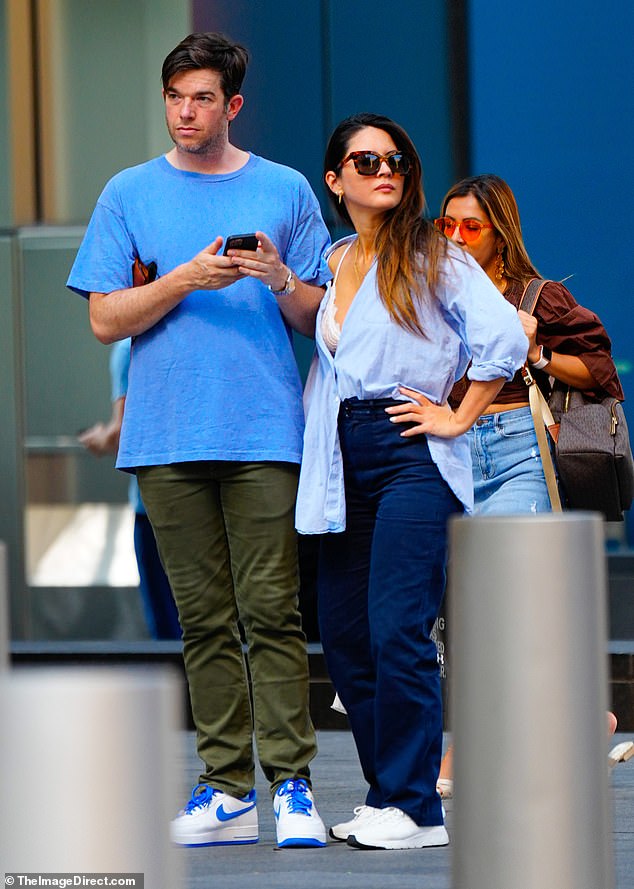 Olivia Munn was seen flashing her white lace bra as she barely buttoned up her oversized light blue shirt when in New York City on Thursday.

The movie star was also seen doting on her boyfriend John Mulaney during their romantic outing as they also held hands.

The couple headed to an afternoon shopping spree in the Big Apple, taking a short break from spending time with their son Malcom, who was born in November.

Romantic afternoon: Olivia Munn, 42, and beau, John Mulaney, 39, were spotted walking hand in hand during a stroll in NYC

The actress, 42, and SNL star, 39, were first linked as an item in May 2021, and the announcement they were expecting a child came to the fore in September of that year.

The Predator actress kept her ensemble simple and casual for a quick stop to pick up a few items.

The beauty donned a light blue blouse with one side tucked into a pair of dark blue jeans. The top half of the blouse was left unbuttoned, showing a glimpse of a lacy tank top.

Oliva slipped into a pair of white sneakers to stay comfortable for walking around the bustling streets of Manhattan.

Cute: The two stars were seen getting close and holding hands as they walked across a street in the city

The mother of one kept her hair parted to the side and allowed the long locks to fall down straight past her shoulders.

She threw on a pair of large sunglasses to add a stylish edge to her overall look for the day.

Her boyfriend also opted for comfort for the weekday outing. He slipped into a pair of olive-green colored pants and a plain, blue T-shirt.

The comedian wore a pair of Nike blue and white sneakers to complete his look.

Cute! At one point, the actress could be seen reaching up to fix her beau’s hair as they walked about on Thursday

John was previously married to multimedia artist, Annamarie Tendler. The two tied the knot back in 2014, but separated in May 2021. Their divorce was finalized at the beginning of this year in January.

When the X-Men: Apocalypse actress began dating the SNL star, a source told Us Weekly that she was very, ‘smitten.’

The actor had suffered with substance abuse off and on throughout his life, but was sober beginning in 2005. After a relapse towards the end of 2020, John checked himself into a rehabilitation center for drug and alcohol abuse.

During an interview on Late Night With Seth Meyers, the stand-up comedian explained how Oliva and their baby had played a key part in getting better.

‘Olivia and this baby have helped save me from myself in this early journey out of recovery,’ he explained.

Adorable: The couple are seen taking a bathroom mirror selfie with their son, Malcom, in a spontaneous family photo

Father and son: During an interview on Late Night With Seth Meyers, John opened up and said that Olivia and his son helped him with his substance abuse recovery

Earlier in January, a source told Us Weekly that the couple are doing well and are having a great time being parents.

‘She and John are both very in love with their baby boy,’ the insider stated. ‘Everything seems to be going great with John. She’s usually more private about her relationship but now she’s sharing more pics. It’s an exciting time.’

Later in June, another source close to the two lovebirds weighed in on their relationship to the entertainment tabloid, explaining that Olivia is very, ‘supportive’ of her beau.

‘Being a father has certainly changed his perspective on life in that he realizes he has another human to take care of so he wants to be the best dad he can be and just be healthy and present for him,’ the insider revealed.

The actress, however, doesn’t have any immediate plans to walk down the aisle, and instead, is putting her focus on raising her son, Malcom. ‘She really wants to enjoy this time as a new mom’

Happy parents: Olivia has started to share more photos of herself with her beau and son on her social media pages

Previous relationship: John married multimedia artists, Annamarie Tendler, in 2014, but their divorce was finalized in January 2022; pictured together in 2019