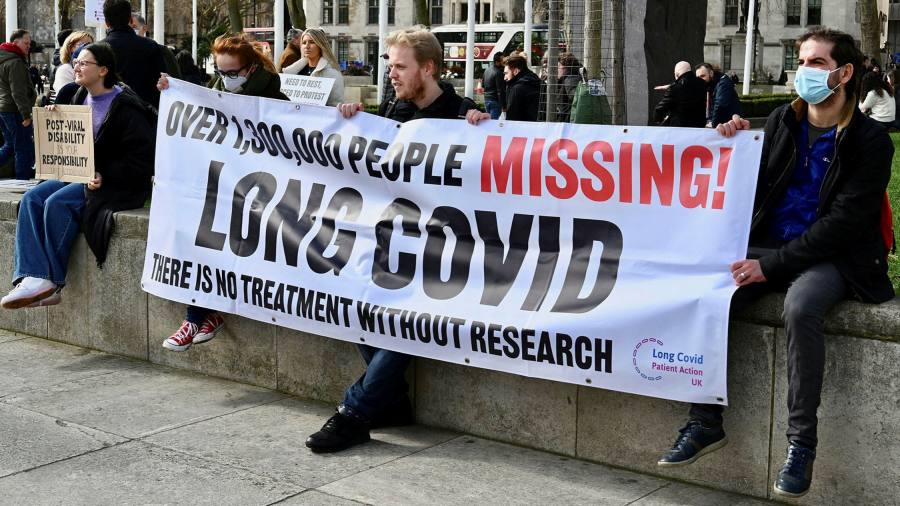 The number of Britons living with long Covid stands at its highest level since official statistics on the phenomenon were first collected a year ago.

Figures from the Office for National Statistics published on Thursday showed an estimated 1.7mn people, or 2.7 per cent of the UK population, reported experiencing symptoms lasting for more than four weeks after they had, or suspected they had, the disease as of March 5 This represents a slight rise from 2.4 per cent about a month earlier.

According to Imperial College London’s React-1 study, the latest UK infection levels are more than 40 per cent above the previous high point during the first wave of the Omicron variant in January, in part because of a decline in the protection offered by vaccines.

Charting the impact on sufferers’ lives, the data showed long covid symptoms affected the day-to-day activities of 1.1mn people, or about two-thirds of those who self-reported they had the condition. About one in five said that their ability to undertake daily tasks had been “limited a lot”.

Fatigue was the most common symptom, reported by just over half of respondents, followed by shortness of breath at 34 per cent, loss of smell at 28 per cent and muscle ache at 24 per cent.

The precise causes of long Covid, and the prognosis for sufferers, remains unclear despite a growing body of research.

Under-50s were more likely to experience the syndrome, the data suggested. As a proportion of the UK population, the prevalence of self-reported long Covid was greatest in people aged between 35 and 49.

Also at greater risk were women, people living in more deprived areas, those working in social care, teaching and education or healthcare, and those with another activity-limiting health condition or disability.

The data showed that 422,000, or just under one in four, people with self-reported long Covid, first had, or suspected they had, the disease less than 12 weeks earlier.

The data is broken down according to the Covid variant giving rise to symptoms. Of people with self-reported long Covid, 33 per cent first became infected before Alpha was the main variant, 15 per cent during the Alpha wave, 27 per cent in the Delta period, and 19 per cent after Omicron became dominant.

The analysis was based on 368,857 responses to the Coronavirus (Covid-19) Infection Survey, weighted to represent people aged two years and over living in private households in the UK.

The estimates related to self-reported long Covid experienced by participants in the survey, rather than clinically diagnosed cases in the full population.

Self-reported long Covid was defined as symptoms persisting for more than four weeks after the first suspected infection that were not explained by something else.

Separately, pressures on the NHS from the high volume of Covid infections were underlined by official data showing 94 per cent of hospital beds are now occupied, and the highest number of staff for 10 weeks are off sick due to the virus: an average of 28,500 staff each day.