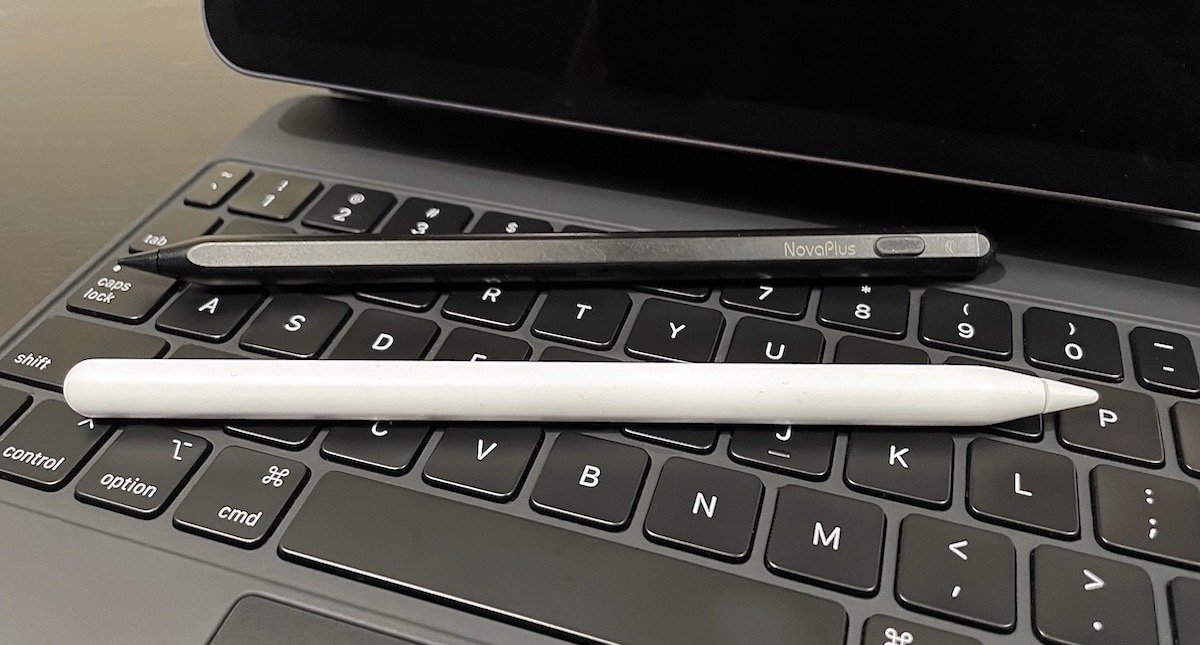 NovaPlus A8 Duo and Apple Pencil.

The NovaPlus A8 Duo is a lightweight Apple Pencil clone, and is a nearly-flawless option for iPad-centric sketchers, note-takers, and more.

NovaPlus is back with an improved version of its well-received Apple Pencil-like stylus, adding a secondary charging method and a few new features. It is an inexpensive clone that gives users a second color option, and even manages to occasionally beat Apple at their own game in a few places.

The previous A7 Pro Pencil, which resembled the actual Apple Pencil 2 in nearly every dimension, was the first truly competitive stylus to add the same magnetic charging that was introduced with the 2018 iPad Pro. Without close examination, most people would be unable to distinguish its “classic white” model from the Apple original.

There are a few tell-tale signs, of course, for both practical and legal reasons: the cap portion of the stylus, for example, is also a button. The previous model and the A8 use a light ring around the top to provide battery information through color changes.

Of course it also includes palm rejection, and of course the soft nibs are fully compatible with Apple’s own — NovaPlus sells its own nib packs. Interestingly, the A8 weighs noticeably less than the Apple Pencil 2: 13 grams compared to Apple’s 20g.

In addition to a lower price, the A8 offers additional value. For a start, a second nib is included in the box, along with a protective woven cover for the stylus, and a short USB-A to USB-C cord to allow for charging by older computers.

All in a cardboard box of about the same dimensions as the Apple Pencil box. We’re just sayin’.

But let’s not kid ourselves: the initial big attractor for many previous and future buyers was and will be the “star black” color option. It’s not the first black Pencil-compatible stylus, but it is the first Pencil lookalike we know of to go dark.

If your art is as black as your soul, this is a major selling point: a black Pencil exactly matching your iPad’s border, your goth wardrobe, and your darkest visions. Naturally, the “classic white” option is also available.

The A8 will be appearing in the market early in the new year, and was the subject of a modest but very successful crowdfunding campaign. We’ve been using the black version for a month now, and we think most buyers will enjoy it in either color.

Because of the new USB-C charging port, the Duo A8 is able to work with more models of iPad than just the ones that support the Apple Pencil 2. In addition to the iPad Pros, iPad and iPad mini models from 2018 and later can work with it — as well as 2019 and later models of the iPad Air.

As mentioned, the button on the cap of the stylus glows green when charging, blue when in “agile mode,” and red when the battery is low. When held down for three seconds, the button will pair or unpair.

In addition, the cap has still more options: users can choose to make a quick double-click of it to switch between telling the tip to change brushes, or to erase, and back again. These actions can also be triggered by a double-tap on the flat side of the device — exactly as you would with an Apple Pencil 2.

The A8 Duo is rated for 12 hours of typical-use drawing time, and recharges fully in about 40 minutes. Due to its ability to charge magnetically on compatible iPads, users are unlikely to ever be inconvenienced in typical use.

An optional extra for the A8 is a wear-resistant metal nib that the company says won’t scratch the tough Corning glass of the iPad models. The NX nib is rated for 30 kilometers of drawing use, and offers an even more pen-like feel, with a pair of them selling for $25.

Outside of drawing, the A8 is able to write text in nearly any text field if desired, from Facebook post input fields to the URL bar in Safari, to Quick Notes, and so on. It can be used for text or drawing in Notes and Pages, among other Apple apps, and is “seen” by them exactly as though it was an Apple Pencil.

NovaPlus makes a point of mentioning that it is compatible with many of the big-name third-party drawing and note-taking apps, like GoodNotes and ProCreate among others. We could not find any app that it didn’t work with, though the erase mode may work differently on some apps — and we only tested a handful of drawing or writing apps.

One letdown, and some minor drawbacks

One of the very few areas where the Apple Pencil clearly beats this clever copycat is in pressure sensitivity: the genuine Pencil has it, the A8 Duo does not. It’s enough to be a dealbreaker for serious artists, but for people for whom drawing is not the primary purpose, the tilt sensitivity — which can also change the stroke being used — may be enough to get by.

The other problematic area is the location of the USB-C charging port, solely because of its dust-protecting port cover nubbin. The small rubbery cover is very likely to get lost if removed for more than a short period of time — but that is not the biggest issue.

The other problem with the cover is that because the USB-C port is on the flat side, it raises the back end of the A8 slightly higher than the nib end. This causes the magnetic bond between the stylus and the iPad Air or Pro to be a bit diluted compared to the Pencil’s firmer attachment, meaning it is easier for the A8 to come loose.

Removing the dust cover fixes the attachment-strength issue, but then you go back to the high risk of misplacing the cover. It would have been worth it, in our opinion, for the makers to give the A8 two flat “sides” — one with the USB-C port and cover, the opposite with the magnetic compatibility.

If your main use of the Apple Pencil 2 is for regular, professional-level art creation, the NovaPlus A8 Duo might pass muster as a secondary-use spare drawing and writing tool — but it won’t be your daily driver. The lack of pressure sensitivity stops it from being a serious artist’s preferred stylus.

Instead, the target market for the A8 is the arguably larger user base of would-be Pencil users who are casual artists, and use it equally often for non-drawing tasks like note-taking. The very attractive pricing makes it a real and frankly superior competitor to the similarly-priced but bulkier Logitech Crayon.

The A8 Duo’s ability to mimic the Apple Pencil 2 in so many ways, combined with its mostly-excellent additional features, earn it serious consideration. If future models ever gain Pencil-like pressure sensitivity, NovaPlus could grow to threaten Apple’s near-monopoly on serious iPad drawing pens.

Where to buy the NovaPlus A8 Duo Pencil

The NovaPlus A8 Duo Pencil may still be available for pre-order from the company’s IndieGoGo crowdfunding page, or directly from the NovaPlus A8 website.