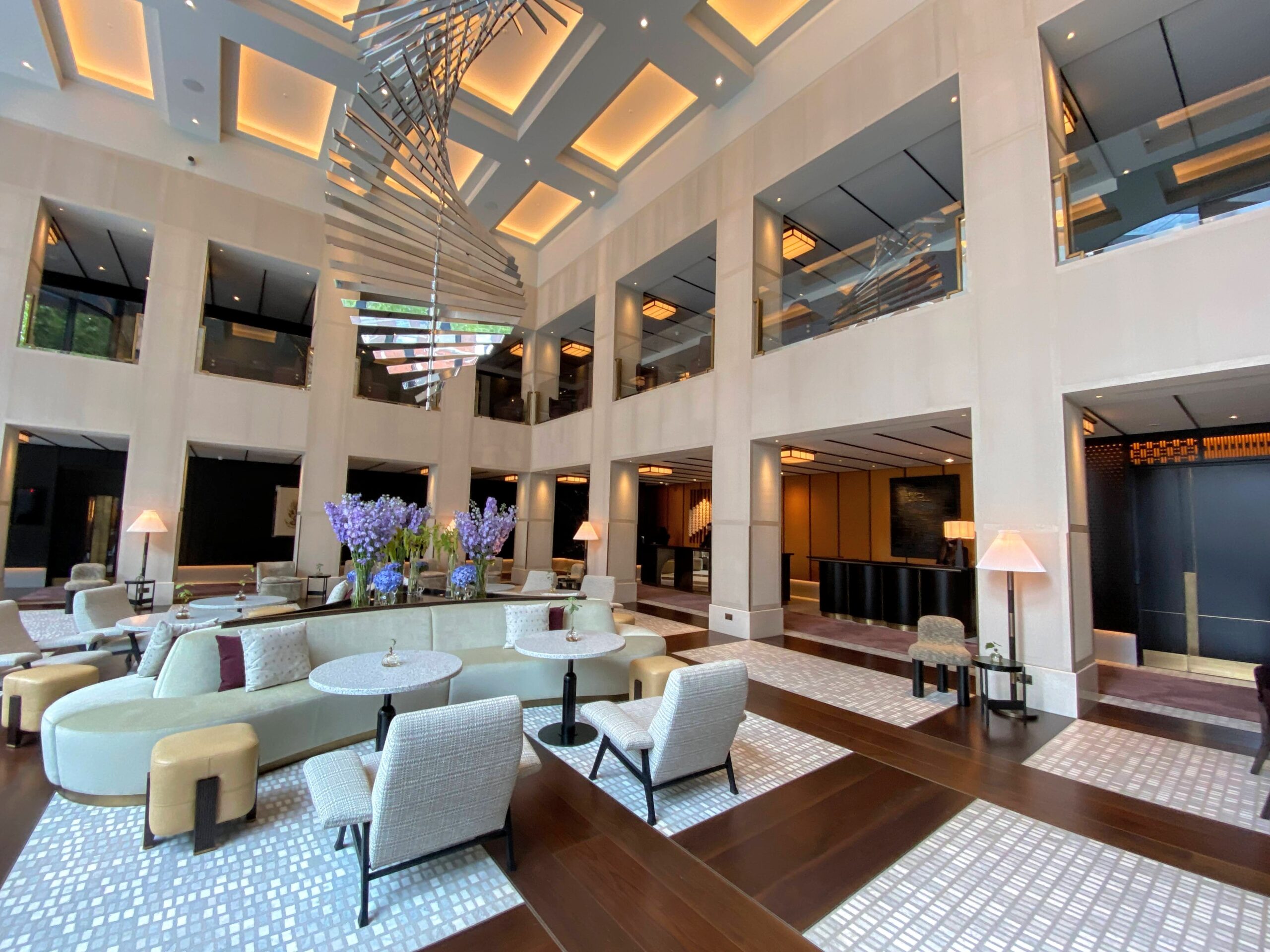 This is my review of my stay at Nobu Portman Square London in Autumn 2021. As I said the other day, before I stayed at the Nobu hotel I was not expecting a lot. Much as I enjoy the food at Nobu, I have not heard great things about their hotel in Vegas and worried that it would be all style over substance. So what did I think?

The location was what attracted me as I had some social events in Portman Square. I had often thought the terrace outside Nobu looked nice, but never been inside.

The hotel is only a few minutes’ walk to Selfridges and opposite the Hyatt Churchill hotel. It’s 4 minutes walk to Marble Arch tube and 6 minutes to Bond Street, so it’s pretty well served for transportation and things nearby.

As soon as my taxi pulled up there were staff to open the door and take my luggage.

The door to the hotel was opened for me as well as I was welcomed to the hotel. The reception area is beautiful and feels very luxurious and tranquil.

The reception staff were very helpful and friendly throughout my stay. I arrived early but there was no issue getting checked in. Although they explained a few crucial parts about the hotel, there was also a welcome letter which I always like so I can refer back to it. I was asked if I minded giving my mobile so they could add me on What’s app if I needed anything which seemed like a good idea.

I had booked a Deluxe room, one up from the entry-level superior room. As expected the room felt Japanese and slightly minimalist in style. I think when you see photos of the rooms they can look a bit stark, but it did not feel that way.

There was a note welcoming me to the hotel and some of the Senbei crackers which were left by the Japanese Tea set.

It felt like a personal touch and something unique to the hotel.

There was also a Nespresso coffee machine, kettle and fresh milk in the fridge.

The mini bar was bursting with choices to run up a hefty bill! I liked that they had the Moth premixed cocktails including Negroni and Espresso Martini. It was good to see some nice glassware to go with it to. Two bottles of water were provided on arrival and topped up at turndown if necessary. The turndown service was excellent with all my bedside table rearranged nicely on a flannel and water put out too.

There were the usual robes (very good quality) and slippers along with a safe and an umbrella. There was no iron or ironing board but provided one very quickly when I requested it. They also have garment steamers available.

There were plenty of sockets everywhere including by the bed and the light switches were simple to operate. The bed was very slightly firmer that I would like but overall was comfortable and the hotel was quiet. It maybe was due to the exclusive Nobu (Simmons) mattress. You could feel the quality in the pure cotton, 400 thread count linens. I was on the 9th floor so fairly high up and heard no traffic noise.

I particularly liked the bathroom which felt luxurious with its marble floor. I was surprised not to find a Japanese toilet though!

Grown Alchemist large size toiletries were provided alongside a good selection of Nobu branded amenities. I’m a fan of Grown Alchemist so I was happy!

The shower was the highlight as it was large with an enormous rain shower head, separate handheld shower and simple to use push controls.

Nobu bar where breakfast is served

One of the massive perks for me was they served breakfast until 2pm! I had it included in my rate and it was great to be able to have brunch after a late night out!

Slightly oddly it was served in the bar. The menu had lots of interesting choices and on day one I went for the Yuzu crab benedict since I adore Yuzu. You could choose whatever you wanted if you had breakfast included so I went for a croissant as well which was enormous as well as being beautifully light and flaky. It was served with a choice of fine butter and homemade jams. Delicious!

The benedict was also great and the eggs cooked perfectly. I really liked having the brioche toast instead of a muffin as it was much lighter and the sweetness went well with the crab. It could have done with a little more crab but that’s my only complaint.

The service the first day was great and the experienced waitress I had was gracious and very friendly which really made the experience. All in all, it was a fantastic way to start the day.

The second day it was slightly less successful due to having to wait quite a long time but the bar was full being a Sunday morning. The same waitress remembered me and when they had run out of croissants (to be fair it was probably around 12.30pm at this point) made the kitchen make one especially for me! This characterized the level of service I had throughout my trip.

The second day I went for the full English. I loved the homemade baked beans and the sourdough toast. It was the attention to detail that really makes it. I had also sampled some of the crispy bacon the day before so I asked to swap in that for the back bacon which of course was no problem.

I did really like the lounge bar and have returned a few times for some great cocktails there. They do also have the Nobu lounge which is more of a nightspot. Here is the full cocktail list at Nobu:

If ever you are in the area I recommend popping in for a Japanese Fizz. I introduced all my friends to it and they all ordered another one or three! so they must have been good! They have that lovely citrus flavor of Yuzu with a hint of sherbet about them. It’s the sort of drink that feels very innocent but wreaks its revenge the next day!

If you have not been it’s worth going once if you have deep pockets and like Japanese food. It’s basically a fashion of Japanese with a hint of Mexican. Portions are pretty tiny which is what makes them expensive. But I like being able to try several different things. I had a few of my favorites:

Then yellowtail Jalapeno which comes with a soy / citrus dressing and just the right kick from the jalapeno.

Then the beef Toban Yaki which comes sizzling on a ceramic plate. It was OK but I found it a little bland.

The highlight was actually the tempura asparagus which had a wafer-thin crispy batter around beautifully fresh asparagus and a lovely dipping sauce. It was so good I ordered another portion!

Nobu has three treatment rooms offering an array of bespoke treatments including the Nobu Zen – a Nobu Signature Ritual with stretching and massage techniques to balance the body and harmonize the mind. I went for a 60 minute “Restless traveler ritual” treatment. This consisted of dry leg brushing to activate lymphatic drainage and reduce puffiness, followed by a long foot ritual with acupressure before moving to an Indian head massage and antipollution face massage to cleanse and nourish. I’d say this is pretty much my dream treatment and very relaxing. The therapist was lovely and felt very pampered by the experience. I would definitely go back even if I was not staying at the hotel.

Afterwards, I was offered their signature tea which was tasty (I hate most herbal teas so that’s saying something). There’s a nice area to sit and relax near the spa and gym which also has an outdoor space.

They do a decent variety of treatments although standard things like manicures and pedicures are on request. It feels more of a wellness spa than a beauty salon.

Nobu offers a full Pilates studio with a choice of classes from £ 35. There is a 24-hour modern gym too.

I had booked through Luxury Escapes as I had credit to use and it cost £ 300 a night including breakfast. Normally I would have booked through our travel agent partners GTC if you get extra perks if you book through them.

As well as being a flexible rate you get:

You can request rates and availability here.

I went with fairly low expectations but ended up loving it so much I stayed an extra night. They were happy to extend my stay for a reasonable rate and offer me free breakfast as the rest of my stay had included it. It does not have the swimming pool / steam / sauna etc that I usually look for but the prices are reasonable and it’s perfect when I will be out and about a lot.

I found it a very calm and luxurious hotel which really helped me relax. The staff were really exemplary apart from one breakfast when things were a little slow. However, they spotted this and apologized before I could say anything and chased things up.

The spa, restaurant and bar are also worth a visit in their own right.

NOTE: Things may have changed slightly as Covid restrictions have lifted further since I stayed in autumn 2021.