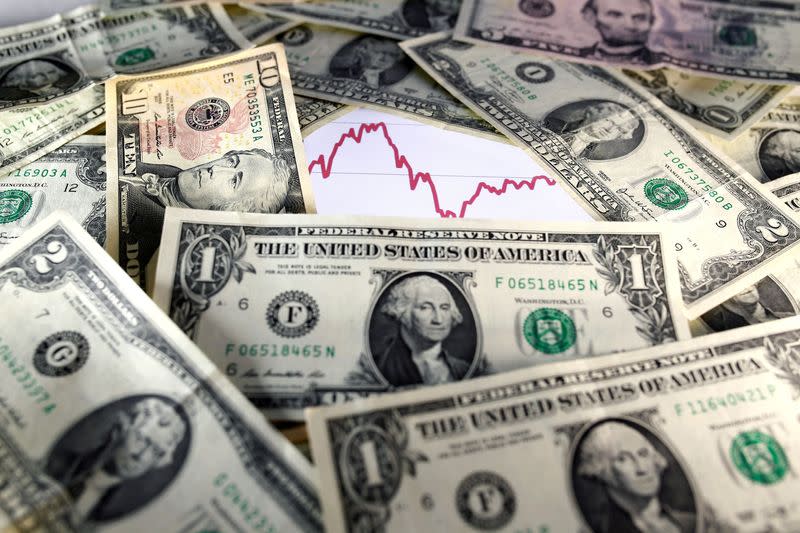 By Vuyani Ndaba and Vivek Mishra

JOHANNESBURG / BENGALURU (Reuters) – Most emerging market currencies will continue to struggle against the mighty dollar over the coming year as the US Federal Reserve finally delivers expected aggressive policy tightening, according to a Reuters poll of FX strategists.

Central banks in emerging market economies have been bracing for this for months by hiking their benchmark interest rates. But the actual moment when the Fed delivers half-point rate increases and rapid balance sheet reduction still matters.

Minutes from the Fed’s March meeting showed officials had generally agreed to trim the central bank’s balance sheet by $ 95 billion a month, providing a major boost to the greenback which was already riding high.

The latest Reuters poll of over 50 currency strategists showed nearly all developing market currencies would weaken over the coming 12 months.

Even currencies which have been dragged higher by the ongoing commodity cycle and their respective central banks’ policy tightening, like the Brazilian real and the South African rand, were forecast to give up about half of those gains in a year.

These currencies have gained about 18% and 9% respectively so far in 2022.

The Mexican peso – a classic emerging market foreign exchange hedge – is expected to lose more than three times its gains for this year in 12 months.

“In the face of imminent sharp Fed hikes and with US yields moving rapidly higher, the resilience of EMFX remains somewhat surprising,” noted Paul Meggyesi, head of FX strategy at JPMorgan.

“A particular risk to EMFX is that as the Fed starts to deliver rate hikes, further upside in US yields could be primarily driven more by real yields than breakeven inflation”

Meggyesi added this has historically been negative for emerging market currencies.

While most emerging market currencies have managed to escape the onslaught of the Fed’s policy tightening relatively unscathed, the Russian ruble and the Turkish lira were notable exceptions.

The ruble, which fell by half in the past month and hit an all-time low of 150 per dollar after Russia’s invasion of Ukraine, was expected to weaken over 15% to 94.2 per dollar in a year from 78.5 presently.

The Russian currency is driven by export-focused companies selling foreign currency and low activity of importers. But analysts warned the recent ruble rally will not last.

“(The recent gain) is not the true reflection of the fundamental situation in Russia. The economy is expected to contract very sharply and inflation is going to become more elevated, which over the longer term should be more consistent with a weaker ruble,” said Lee Hardman, currency analyst at MUFG.

Hardman said the situation for the Turkish lira was not very different.

“They (the government) are intervening to support the lira but they’re not going down the kind of draconian measures like capital controls we see in Russia.”

China’s tightly controlled yuan was predicted to depreciate 1.4% to 6.45 per dollar in a year as analysts warned that a shrinking yield gap between Chinese and US 10-year government bonds could trigger capital outflows.

Elsewhere in Asia, the Philippine peso and the Indian rupee were set to weaken between 1% -3%.

(Reporting by Vuyani Ndaba in JOHANNESBURG and Vivek Mishra in BENGALURU; Polling by Devayani Sathyan and Md Manzer Hussain; Editing by Ross Finley and Bernadette Baum)