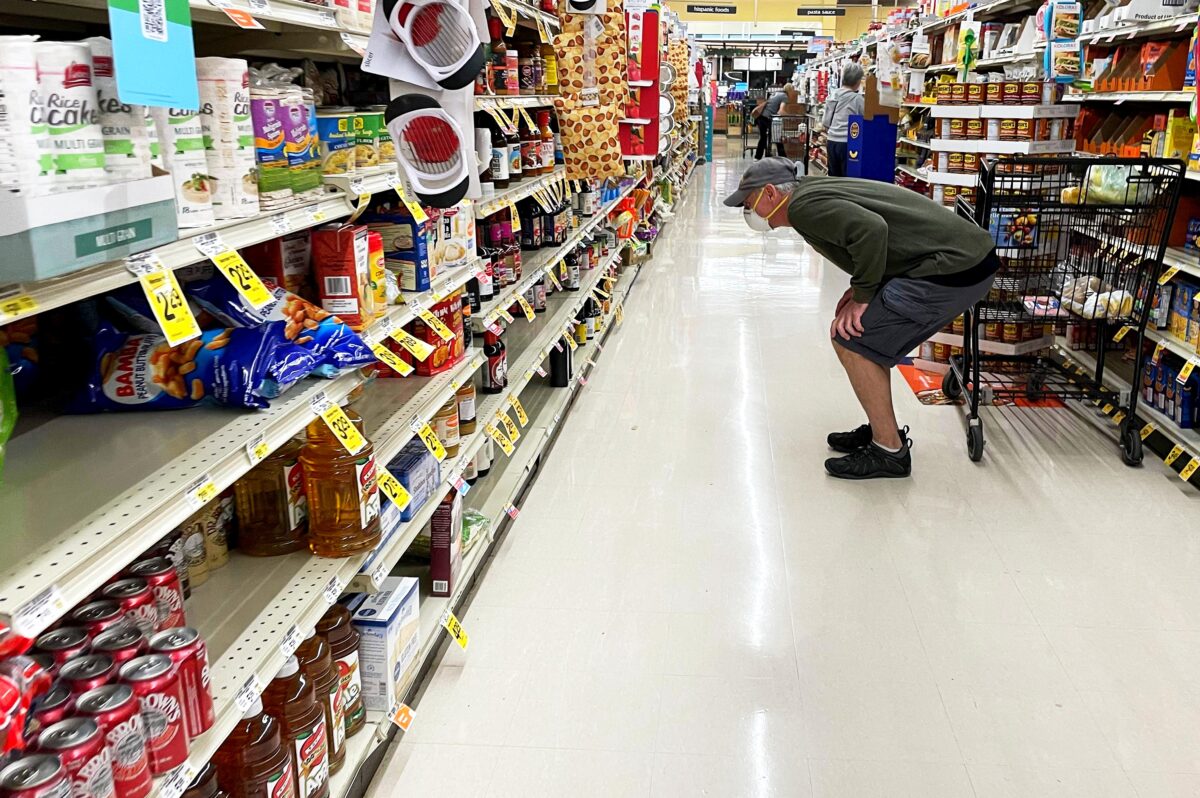 Americans hammered by rising inflation should brace for the economy to become even more precarious, an economist has warned. Inflation comes in several stages, and based on historical precedent, the next one the United States is facing won’t be pretty, he said.

Inflation has been ramping up for more than a year after gigantic government spending during the COVID-19 pandemic led the Federal Reserve to print trillions more dollars. Consumer prices rose 8.6 percent year-over-year in May, with prices of some necessities, such as gasoline, housing, and food, rising particularly sharply.

Americans are now quickly realizing the economic consequences. This is stage two, with stages three and four still expected to come, according to Ross McKitrick, a professor of economics at the University of Guelph in Ontario.

The first stage of inflation happens when newly printed money enters the economy.

“It’s at that first stage where you have the money illusion. Which means people think they have more money than they do, ”he said, noting that this leads people to spend more, creating a brief economic boom.

“But they do not actually have more money than when they started. What they have is a dilution of the money supply, ”McKitrick told The Epoch Times.

Such a dilution, however, does not hit everybody the same.

“There’s an advantage in being early in there because if you’ve got that stimulus check early, you went out and you could do purchases when other prices are still low,” he said. “A month later, those prices may be up. At this point, of course, the same check has a lot less purchasing power, but so does all your other money. ”

According to McKitrick, if people could correctly anticipate how much less their money would be worth because of the inflation of the money supply, they would think twice about how much they could actually afford. Unfortunately, people typically only come to that conclusion in retrospect, after prices have already increased.

“At that point, you might look at it and realize, ‘OK, I would not have bought that car if I knew what was coming,'” he said.

When people realize how much less they can afford at the new prices, that’s where expectations come into play. Is this going to be a one-off thing? Will prices go back down again?

“People can cope with a lot of things temporarily. If you think, ‘OK, the price of gas jumped and it will be high for a month or two, and then it will go back to normal,’ nobody’s going to change their behavior in response to that, “McKitrick said.

“But we’re now at a point where people are realizing, ‘OK, the price of gasoline and diesel has doubled… and I do not see a relief on the horizon,’ and then ‘I actually have to start making business decisions here. ‘”

At this point, people start to cut back on their expenses.

“The next stage in this inflationary process happens when labor markets begin to adjust,” McKitrick said.

“So right now, you have a lot of workers who’ve effectively taken a 10 percent pay cut. And they’re not just going to capitulate to that, ”he said. “They’re going to now go to their employers and demand some relief in the form of higher wages, and the response of the employers is going to be to resist that because all their input costs have gone up and they do not feel like they’ve got a 10 percent increase in their budget to hand over.

“And both sides in effect have a genuine case to make that this is not new money, these are not larger profit margins — workers have lost purchasing power.”

He would expect some “strike action and very tough bargaining” on the horizon.

“If that kind of wage settlement process gets calibrated to the inflation rate, then that becomes a new driver of price increases” called “wage-price spiral,” he said.

Similar to the inflation in the 1970s, as long as people expect inflation and manage to get a pay raise to keep up with it, the inflation will not go away, as the payroll cost needs to get baked into the price of the final product .

“You never get rid of inflation as long as people expect inflation to be there,” McKitrick said.

The fourth stage ensues when the business and labor finally bury the hatchet.

“What are you looking for in that whole process is who’s going to capitulate?” McKitrick said.

“Ultimately… if you have a permanent increase in price level by 10 or 20 percent, by the time it’s over, somebody’s got to capitulate and just accept that as a pay cut. The phase that we’re going into now will be that hard bargaining over who’s going to capitulate. ”

In the United States, the agency responsible for countering inflation is supposed to be the Federal Reserve.

Fed Chairman Jerome Powell has cited the most recent job openings figure — about two jobs available for every person seeking work — as a reason for the Fed to raise interest rates, tighten the money supply, slow the economy, and thus curb the number of jobs openings. That should in theory lower the pressure on employers to raise wages.

McKitrick is skeptical of that logic.

It’s true that in April, there were an estimated 11.4 million job openings and fewer than 6 million people classified as unemployed. But that’s because anybody who did not look for a job in the previous four weeks is not counted as unemployed anymore.

“That’s not because the US economy is growing at exceptional rates and there’s something unusual happening on the demand side,” he said.

“This is an unusual situation on the supply side, and that’s much more related to the various policy measures that have been implemented… where people just did not have to participate in the labor market the way they used to. So, past few years, people’s attachment to the labor market has weakened quite a bit. ”

Indeed, the infusion of new money was accompanied by the fear of COVID-19 and government-induced economic shutdowns. Millions of Americans have lost or left their jobs, and even when the economy reopened, many have not returned.

If the pre-pandemic economy only managed to keep up with population growth, adding about 74,000 jobs per month on average, the United States should have had about 2.4 million more people employed in May.

“For whatever reason, a lot of people still haven’t calibrated themselves back to the regular expectations of full-time work and they haven’t had to,” McKitrick said.

As he pointed out, this isn’t “something the Fed can fix.”

“That’s got to happen through governments revisiting all the labor market policies to try to get labor force participation up,” he said.

In order to curb inflation, authorities “have to, first of all, stop expanding the money supply,” which means getting the government’s “fiscal policy under control,” he said.

There’s no indication the government is taking that road. The Biden administration’s latest idea has been to give Americans a temporary break from gasoline taxes. Fixed at 18.4 cents per gallon, nixing the tax would save motorists less than 4 percent on current fuel costs.

The tax contributes about $ 36 billion per year to the federal Highway Trust Fund, which pays for repairs of roads and bridges as well as public transit development. The fund is basically bankrupt, and the federal government, itself mired in deficits, has been repeatedly bailing it out. The tax break would thus mean either borrowing more money or printing more.

Fed representatives have been talking about a “soft landing” —slowing the economy just enough to curb inflation, but not so much as to cause a recession.

McKitrick acknowledged that the Fed did a “reasonably good job” of soft-landing the economy in the 1990s when inflation increased slightly and the Fed quickly countered it by aggressively raising rates.

This time, however, the Fed has waited a year with the rate hikes, initially writing the inflation off as “transitory.”

“Right now, they’re behind the curve on trying to get a soft landing,” McKitrick said.

Yet, the Fed’s intervention can still play a role.

“What the Fed can ultimately do is change expectations,” he said.

If people become satisfied that prices will at least stop significantly increasing, “that removes a lot of inflationary pressures in the economy” as “basically, people learn to live with the existing price levels on things,” without demanding higher wages, he said.

The problem is that the Fed is facing a volatile financial system in which higher interest rates can easily trigger a recession.

After the 2008 housing crash, the Fed pumped trillions of dollars into the economy without triggering runaway inflation in consumer goods.

“The mechanism there was asset purchases,” McKitrick said.

The Fed was initially buying stocks and mortgage-backed securities (MBS) and later Treasurys and MBS in what it has called “quantitative easing,” creating new dollars in the process. But those dollars went largely to financial institutions that did not use them to buy consumer goods, but rather stocks, bonds, and other equities.

Meanwhile, “the banks did not engage in large-scale lending,” McKitrick said. That means the new dollars were to some degree kept out of the consumer market and thus out of sight of the government bean counters who calculate the consumer price index and personal consumption expenditures — the most commonly used measures of inflation.

Many economists argue, however, that the new money caused “asset inflation” in equity markets — boosting prices of stocks beyond valuations backed by fundamental financials.

Some companies “traded on extremely high multiples of their actual earnings,” McKitrick said.

Normally, investors would value a stock at 5 to 10 times the company’s annual earnings.

“But you had the emergence of all these social media companies, and the streaming companies, and software service companies where people were bidding up prices up to 75 or 80 times the actual sales revenue and it was all based on expectations of future earnings growth, He said. “That’s where you have a recipe for a lot of volatility.”

Now that the Fed is raising rates, “all the cheap financing that allowed those companies to grow so rapidly is not going to be available,” he said.

“There will be some companies that have very high debt loads, and as it rolls over into higher interest rates, then for companies that have pretty small current cash flow — and it’s all based on future growth — it can just be very difficult for a company to be able to afford its interest bill to double. ”

Moreover, the inflated valuations have become directly tied to the expectation that the Fed will continue to print more money.

“So whenever there’s an interval where they [the Fed] were trying to taper their quantitative easing or actually began to sell assets, there’d be a pretty quick negative response in the stock market. ”

The Fed has barely started doing so.