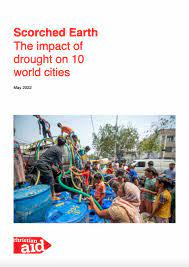 As a heatwave heads to the UK, and Indian cities battle with record temperatures, a new report from Christian Aid highlights how the climate crisis is increasing the severity of drought in ten of the world’s major cities and demands an international fund to pay for climate caused loss and damage.

Despite covering more than 70% of the earth’s surface, only 3% of the world’s water is suitable for drinking. Of this fresh water, 70% is locked in glaciers and ice caps. Less than 0.01% of all fresh water worldwide is available for human use in lakes, rivers and reservoirs. Despite this, Christian Aid analysis shows global water use grew at more than twice the rate of population increases over the course of the 20th century.

Just last month, there was water rationing in the Chilean capital, Santiago and people have been queuing for water in New Delhi where temperatures have got so high that heatstroke is a risk even without doing any physical activity. In 2018, after extended drought, Cape Town came within days of becoming the first major city in the world to run out of water. ‘Day Zero’, when the taps for four million inhabitants would be turned off, was averted after emergency measures were implemented to cut the city’s water usage by 50%.

Even in the UK, London has experienced heatwaves in recent years and the CEO of the Environment Agency, James Bevan, warned that within 25 years, London and the South East of England could run out of water. The cost of a severe drought to London’s economy is estimated by Thames Water to be £ 330m per day, and would have severe economic, social and environmental consequences. The Environment Agency has said that by 2050 some rivers will see 50% -80% less water during the summer months.

The report – Scorched Earth: The impact of drought on 10 world cities – has been published alongside new polling by Savanta, commissioned by Christian Aid. The data reveals that given several options, a plurality of the UK public believe that rich countries should pay to mitigate the impact of drought (36%). The data also reveals nearly 6 in 10 (57%) people see the connection between their own actions and drought, but less than 3 in 10 (27%) see the connection and are spurred into action.

With heatwaves hitting the UK in recent years, almost half (49%) of adults across the UK are now concerned about the impact of drought on people in the UK. Despite this, over 6 in 10 (64%) agree that they have never seen information about how to protect themselves from it.

The ten cities featured in the report, publishes on the eve of Christian Aid Week, are Sydney, Harare, Sao Paulo, Phoenix, Beijing, Kabul, New Delhi, Cape Town, Cairo and London. The danger of city droughts are only set to get worse without action to address climate change. Currently, 55% of the world’s population lives in urban areas, with this set to rise to 68% by 2050.

Without action to cut emissions and better management of freshwater resources, Christian Aid warns the toll will be felt acutely by the poor. According to the UN, lower-income city residents can pay up to 50 times more for a liter of water than their wealthier neighbors because they often have to buy from private vendors. Cities in poorer countries are also far more vulnerable than those in richer countries as they have fewer resources to adapt to the water shortages.

Report co-author, Christian Aid’s Nushrat Rahman Chowdhury, said: “Drought is not new but its intensity and frequency have increased over the last thirty years due to global warming. It is a real danger; it threatens lives and livelihoods of some of the poorest people in the world. These are communities which have done the least to cause the climate crisis. This is the reality known as loss and damage. To address this injustice, we not only need emissions cut but also provide financial support for those losses which can be adapted to .That is why, at this year’s UN climate talks in Egypt, we are calling for the creation of a loss and damage finance facility to be a major priority.

Dr Friederike Otto, Senior Lecturer in Climate Science at the Grantham Institute, Imperial College London, carried out a study into the 2018 drought in Cape Town. She added: “Changing rainfall and higher temperatures – the result of greenhouse gas emissions – are making drought more common and more severe in parts of the world. As we saw in Cape Town, when it nearly reached Day Zero in 2018, this can add up to catastrophic water shortages even for some major cities.

“Our study of that event found climate change made the drought about three times more likely to occur. Until net greenhouse gas emissions are halted, the risk of drought threatening cities’ water supply will keep growing.”

Graham Knott, CEng, MCIWEM, a retired water and environmental engineer, said: “Lack of a reliable supply of clean water, made worse by the impacts of climate change, is affecting cities in many different ways: we’re currently seeing terrible suffering in New Delhi due to droughts and heatwaves.

“Higher temperatures, combined with the growing levels of demand from cities make our precious freshwater resources extremely vulnerable. Even London and the southeast of England face water shortages in coming years if we do not tackle climate change and adapt to its impacts by better managing our water resources and infrastructure.

“Set against this many cities have seen significant increases in damaging and fatal floods. Durban, South Africa, and even the desert cities of Saudi Arabia have recently suffered from significant flooding. Unchecked pollution of even the clean water we have makes things even worse.

“Without action and adaptation, climate change threatens to affect many things we currently take for granted.”

Mohamed Adow, Director of Nairobi-based climate and energy think tank, Power Shift Africa, said: “This is an important report which highlights the growing threat of urban drought. With more and more people living in cities, this is already becoming a major consequence of the climate crisis which will affect millions of people. Here in Africa we bear the brunt of this climate emergency, so we are acutely aware of the value and importance of water and what happens if we run out. This year’s COP27 climate talks will be taking place in Egypt, a country already facing the prospect of water shortages. It is vital that at these talks leaders come prepared with plans to cut emissions and provide the finance and support to help communities facing drought. “

The report also highlights the impact that drought is having in driving conflict, and in particular, in Crimea, the part of Ukraine annexed by Russia in 2014. The region is vulnerable to climate change and since the annexation Ukraine protested by diverting the North-Crimea Channel which provides 85% of Crimea’s water, sparking tensions in Russia and with prominent politicians like Konstantin Zatulin calling for a more aggressive foreign policy towards Ukraine.

In Zimbabwe, drought and erratic rainfall have made growing food a yearly challenge. Janet Zirugo, 70, has experienced the impact of climate change first hand. She said: “We have a challenge of rainfall, and a challenge of hunger. There will be no good crops in our fields. There would be no water to water our gardens. For our livestock to get drinking water, they will not get it. The biggest change is on rainfall patterns. Long back we used to know that when the rains fall in October, we would know that the rain season has started for sure. We then went to the fields to plow. Nowadays we have to wait either we plow in November or December. “

She said drought has been a major driver of hardship and hunger for her children: “When I made the meal I gave it to children, then remove the dog’s share and put it down for the dogs. Children would pick the dog’s meal from the ground because they were not full. We ate things which could not be eaten in normal times. These challenges had been brought about by the drought. Rains had not fallen, these things I can not forget. Because if you see a child picks dog’s food, the situation had reached unbearable proportions. “