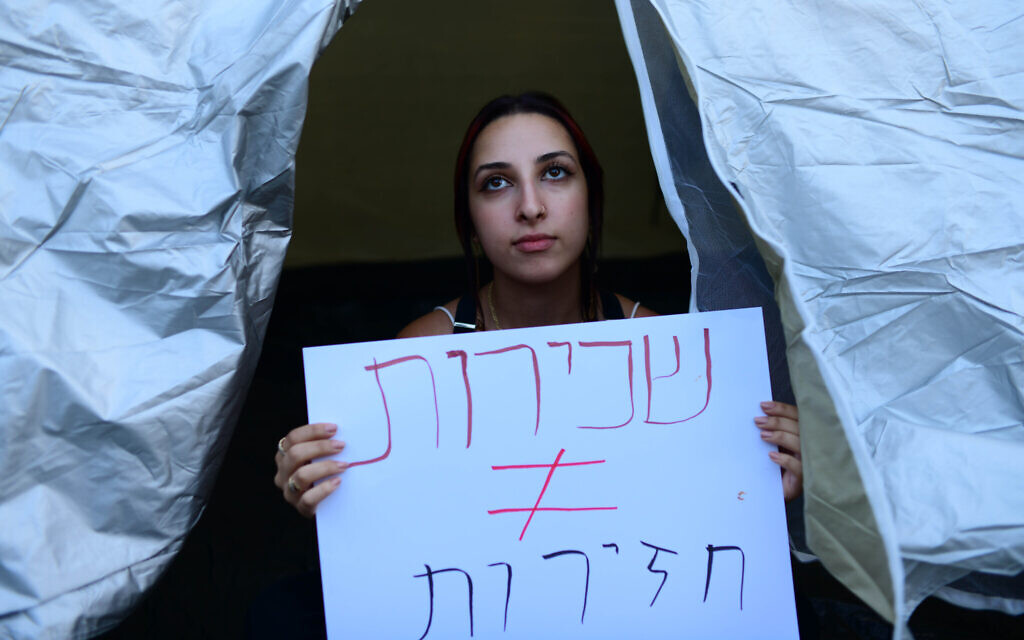 How dumbfounding and unpredictable have asking prices become for even run-down rental apartments in Tel Aviv? A new, interactive game that lets players guess the asking rent of an apartment in Israel’s most expensive city based on a few photos, the general location, and the number of rooms has people hooked.

The goal is to highlight some of the absurdities in the Tel Aviv real estate landscape, and to reflect how in tune players are with the realities of a squeezed, soaring housing market. Players type in a guess and hit “next” to find out how close they were to the actual asking price.

Tepper told The Times of Israel he was motivated to create Rent WTF because “you can hear everywhere, especially on social media, that everyone is talking about the rental prices and how fast things are changing. I thought of a way I can both raise awareness for the situation, but also raise a smile on people’s faces.”

The game responds to guesses — right or wrong or close — with humor, encouraging players with a “very impressive” message or “either you’re cheating, or you’re a real estate appraiser” or criticizing them with “terrible” and ” not even close.”

After five guesses, the game provides a score. (This writer was wrong only 15% of the time, with one guess right on the nose.)

Tepper says the apartment “features” that the game provides as pricing clues are not predefined.

“I took a bunch of listings and added the same details that the original listing had. While some of them mentioned the square feet or the floor number, others mentioned only the neighborhood or number of rooms. This also shows how inconsistent this market is,” he said.

“I think there is so much variance in Tel Aviv’s rental prices that there is no single predictor for the asked price. Probably, ‘located in Tel Aviv’ is the most significant feature,” he said.

The game has been circulating widely and has been met with universal enthusiasm. Reactions have included a politician and former Knesset member playing it live on TV (and massively underestimating real rental prices), and positive feedback across social media platforms from those who’ve had a go and understand the more serious point behind the quiz.

Rent WTF was a fun side-project designed to emphasize the levels of the unpredictability of Tel Aviv rental prices, Tepper said, adding that he wanted to make his voice heard in the debate but had no idea how fast the game would take off.

“While some might get it right and simply enjoy the game, others will be way off and will have a wake-up call,” he explained.

Tepper’s own average error in estimating rental prices is 7.6%, he divulged.

Tepper said that his objective in creating the game was a social purpose rather than a commercial one. But in the longer term, he’d like to extend it to cover property markets outside of Tel Aviv, and to see the game as a way to add “market opinion” into the housing prices equation.

Rents in Israel rose by around 20% in the first half of 2022. But in Tel Aviv according to anecdotal evidence from renters and real estate agents, lease renewals are often asking for prices that are 20% to 40% higher than last year.

A recent analysis by The Times of Israel suggests that while some people are willing to pay a premium to live in Tel Aviv, many are finding themselves simply priced out of the city. With new construction focused on luxury residences, they see little prospect for change.

Israeli cooking is taking the world by storm. Here’s your chance to join in…

The Times of Israel Community is excited to present our new virtual cooking series, B’Teavonwhere world renowned chefs show you how to make classic and modern Israeli dishes.

Learn more Learn more Already a member? Sign in to stop seeing this

We’re really pleased that you’ve read X Times of Israel articles in the past month.

That’s why we started the Times of Israel ten years ago – to provide discerning readers like you with must-read coverage of Israel and the Jewish world.

So now we have a request. Unlike other news outlets, we haven’t put up a paywall. But as the journalism we do is costly, we invite readers for whom The Times of Israel has become important to help support our work by joining The Times of Israel Community.

For as little as $6 a month you can help support our quality journalism while enjoying The Times of Israel AD-FREEas well as accessing exclusive content available only to Times of Israel Community members.

Thank you,
David Horovitz, Founding Editor of The Times of Israel