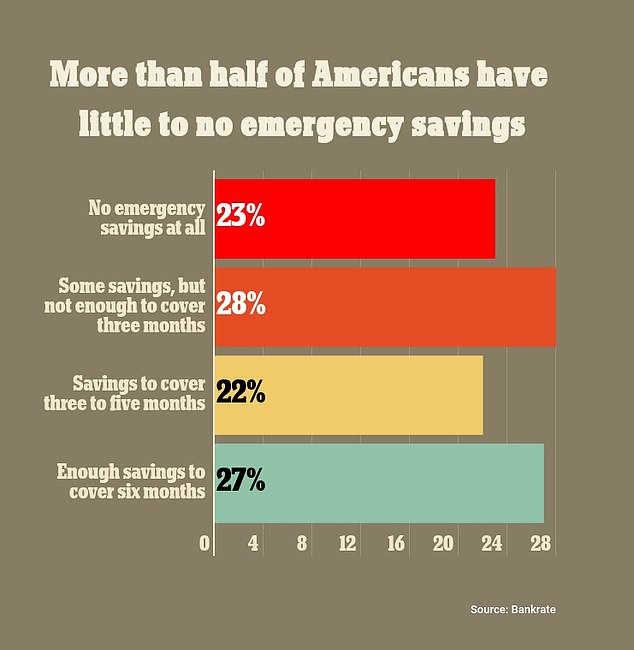 More than half of Americans have little to no savings lined up and are expected to fall deeper into debt over rising inflation as they are unable to set aside savings or emergency funds.

A nationwide Bankrate poll of 1,025 adults found 51 percent of Americans said they had little to no savings or emergency funds lined up.

And while less than half have savings lined up, a LendingTree survey of 1,008 consumers in July found that 43 percent of Americans will take on additional debt in the next six months in order to make ends meet, with more than half of that number represented by parents with young children.

It comes as the country saw inflation hit its highest mark in 41 years last month with prices for goods and services soaring, all while economists say there’s a 47 percent chance a recession will hit within the next year.

A Bankrate survey of 1,025 consumers in June found 51 percent said they had little to no savings or emergency funds lined up as debt is expected to grow and a recession is forecast

It comes as inflation hit a 41-year record high of 9.1 percent in June

More than a third of those who responded to the Bankrate survey said they now have less savings than they did last year, with only 24 percent saying they had more

According to the LendingTree survey, more than three in five Americans are already dealing with debt, with credit cards expected to be the most common reason why nearly half will sink further into the red.

The rise in debt will likely take a toll on consumer’s savings, which for a third of Americans is already lower than it was last year.

According to the June Bankrate poll, 23 percent of Americans have no emergency savings at all, and only 28 percent have savings to last three months worth of expenses.

About 22 percent of respondents said they could cover three to five months worth of expenses, but only 27 percent could cover six months or more — the amount recommended by financial experts.

When asked how their current emergency funds compare to last year’s, 34 percent said they have less savings now than before.

The number of Americans now worried that their savings might not be enough has risen to 58 percent, up from 44 percent in 2020, Bankrate found.

‘The percentage of Americans who are comfortable with their emergency savings has gone from 54 percent to 42 percent in the past two years, while those [feeling] uncomfortable has jumped from 44 percent to a majority 58 percent,’ Greg McBride, Bankrate’s chief financial analyst, said in a statement.’

‘Inflation, at the highest levels in 40 years, will erode the comfort level with and buying power of your emergency savings.’

According to the full breakdown, 32 percent of respondents said they were very uncomfortable with the amount they have saved for emergencies, with 26 percent saying they were only ‘somewhat uncomfortable.’

The number of Americans now worried that their savings might not be enough has risen to 58 percent, up from 44 percent in 2020

Along with McBridge, American Consumer Credit Counseling (ACCC) CEO Allen Amadin said the high costs of goods was eating away at people’s savings as the nation braces for an expected recession by 2023.

Last month, the ACCC found that 48 percent of consumers said the rising costs of basic necessities impacted their family’s lifestyle, up from the 39 percent reported in the first quarter.

‘Consumers have been going through many different financial phases in a very short period of time forcing them to pivot several times according to the challenge,’ Amadin said in a statement.

Those changes already appear to be in affect as stocks for Walmart plummeted 10 percent on Tuesday following the retail giant’s prediction that profits would fall as surging prices for food and fuel prompted customers to cut back on discretionary purchases.

The $361 billion retailer saw its share price fall from $132 to $121 as the market opened on Tuesday, with its market value dropping to $325 billion as shares are still down by more than 7.7 percent after a small rebound in the afternoon.

Just one day prior, Walmart, a bellwether for the retail sector that caters to cost-conscious shoppers, said its full-year profit would decline 11 to 13 percent, compared to the one percent fall it previously forecast.

That behavior is forcing the nation’s largest retailer, based in Bentonville, Arkansas, to step up discounts on general merchandise items like home furnishings and electronics to move inventory.

It also pledged to cut prices of clothing and general merchandise more aggressively than it did in May to reduce a spring backlog.

Walmart shares fell by 10 percent on Tuesday morning, with shares still down more than 7.7 percent after a small rebound by the afternoon

Target, one of Walmart’s biggest retail rivals, saw its stock plummet by 4.66 percent as of Tuesday afternoon amid big losses for retailers across the nation

Excluding divestitures, full-year earnings per share are expected to drop 10 to 12 percent, the company said.

Walmart CEO Doug McMillon said in a statement ‘The increasing levels of food and fuel inflation are affecting how customers spend.’

McMillon added the company is expecting more pressure on general merchandise in the second half of the year. However, Walmart said it is encouraged by early signs for sales of back-to-school supplies.

Online shopping fared no better, with Amazon reporting a drop of more than 4.5 percent, and Shopify sinking more than 14 percent as it lays off 10 percent of its workforce.

Online shopping giant Amazon was not spared from the ripple effects, with the company seeing more than a 4.5 percent drop

Shopify saw a steeper drop of more than 14 percent as it begins to lay off 1,000 employees

In a letter to employees, Shopify CEO Tobi Lütke said the company had bet that online shopping would overtake retailers within the next five years as the pandemic saw a boost in Internet purchases.

‘It’s now clear that bet didn’t pay off,’ Lütke wrote. ‘Ultimately, placing this bet was my call to make and I got this wrong.’

‘As a consequence, we have to say goodbye to some of you today and I’m deeply sorry for that,’ he added that about Shopify 1,000 employees will be out of a job.

Evidence of a consumer spending pullback is growing, and an update later this week on US economic growth may show output shrank in the April to June period for the second quarter in a row.

The news from Walmart comes as the Federal Reserve is set to announce another hefty hike in its benchmark interest rate on Wednesday.

Together with its previous rate increases, the Fed’s moves will make borrowing costlier for individuals and companies and likely dampen the economy over time.

Several major banks and financial experts also expect the Fed’s move to bring about a recession, with a July survey of economists from Bloomberg agreeing that there was nearly a 50-50 chance that the nation will hit a recession in the next 12 months, up from 30 percent last month.

‘[The Fed] has made it clear it is prepared to sacrifice growth as it desperately tries to get a grip on inflation via higher interest rates,’ James Knightley, chief international economist at ING, told Bloomberg.

‘In this environment, we see the clear risks of retrenchment in consumer spending while falling corporate profitability means businesses start to hunker down,’ he added.