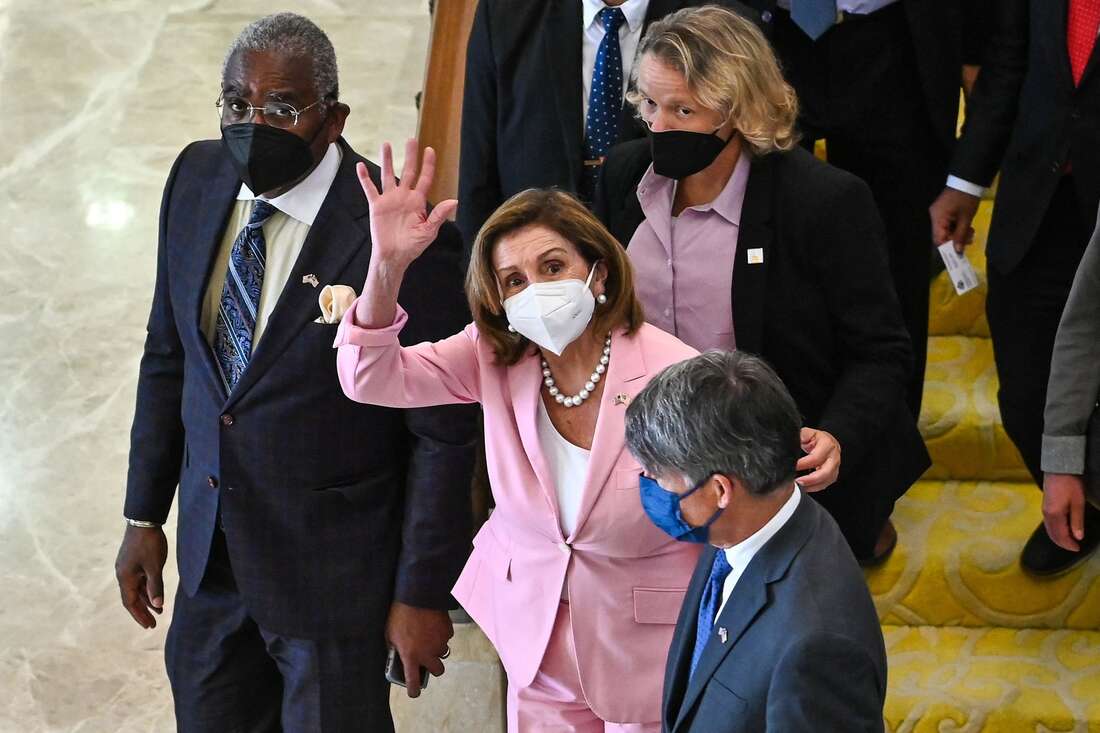 United States House Speaker Nancy Pelosi landed in Taiwan on Tuesday evening, defying a string of increasingly stark warnings and threats from China that have sent tensions between the world’s two superpowers soaring.

Pelosi, second in line to the presidency, is the highest-profile elected US official to visit Taiwan in 25 years and Beijing has made it clear that it regards her presence as a major provocation, setting the region on edge.

Live television images showed the 82-year-old lawmaker, who flew on a US military aircraft into Taipei Songshan Airport, being greeted on arrival by foreign minister Joseph Wu.

Pelosi is currently on a tour of Asia and while neither she nor her office confirmed the Taipei visit, multiple US and Taiwanese media outlets reported it was on the cards — triggering days of anger from Beijing.

Chinese warplanes buzzed the line dividing the Taiwan Strait on Tuesday shortly before the expected arrival in Taipei of Pelosi for a visit that has pushed friction between Washington and Beijing to a new level.

The Chinese leadership has repeatedly warned against Pelosi, a long-time critic of Beijing, making a trip to self-ruled Taiwan, which China claims as its own.

In the latest rhetorical salvo, Chinese Foreign Minister Wang Yi said on Tuesday that US politicians who “play with fire” on the Taiwan issue will “come to no good end”.

The United States said on Monday it would not be intimidated by what it called Chinese “sabre rattling”.

Most of Pelosi’s planned meetings, including with President Tsai Ing-wen, were scheduled for Wednesday, a person familiar with her itinerary said.

Four sources said she was scheduled on Wednesday afternoon to meet a group of activists who are outspoken about China’s human rights record.

Taiwan’s foreign ministry said it had no comment on reports of Pelosi’s travel plans, while her office has also kept silent.

Several Chinese warships have also sailed near the unofficial dividing line since Monday, the source said.

The source said both Chinese warships and aircraft “squeezed” the median line, an unusual move the person described as “very provocative.”

The Chinese aircraft repeatedly conducted tactical moves of briefly “touching” the median line and circling back to the other side of the strait while Taiwanese aircraft were on standby nearby, the person said.

The Chinese planes left the area in the afternoon but the ships remained, they said.

Meanwhile four US warships, including an aircraft carrier, were positioned in waters east of Taiwan on what the US Navy called routine deployments.

The carrier USS Ronald Reagan had transited the South China Sea and was currently in the Philippines Sea, east of Taiwan and the Philippines and south of Japan, a US Navy official told Reuters.

It was operating with a guided missile cruiser, USS Antietam, and a destroyer, USS Higgins. The amphibious assault ship USS Tripoli was also in the area.

Since last week, China’s People’s Liberation Army has conducted various exercises, including live fire drills, in the South China Sea, Yellow Sea and Bohai Sea, in a show of Chinese military might.

China views visits by US officials to Taiwan as sending an encouraging signal to the pro-independence camp on the island.

Washington has no official diplomatic relations with Taiwan but is bound by US law to provide the island with the means to defend itself.

Russia – itself locked in confrontation with the West over its invasion of Ukraine – also chimed in on Pelosi’s expected visit.

The Kremlin’s foreign ministry spokeswoman called it a “provocation” aimed at pressuring Beijing and reiterated Russian support for Beijing’s One China principle.

Earlier on Tuesday, Pelosi visited Malaysia, having begun her Asia tour in Singapore on Monday. Her office said she would also go to South Korea and Japan but made no mention of a Taiwan visit.

The US Air Force plane that flew Pelosi to Malaysia headed towards Borneo on Tuesday before turning north to the Philippines, tracking website Flightradar24 showed on Tuesday. Reuters could not establish if Pelosi was on flight SPAR19.

Taiwan’s Defense Ministry said it had a full grasp of military activities near Taiwan and that it would dispatch forces appropriately in reaction to “enemy threats”.

China’s defense and foreign ministries did not respond to requests for comment.

In the southeastern Chinese city of Xiamen, which lies opposite Taiwan and has a large military presence, residents reported sightings of armored vehicles.

Chinese social media was abuzz with both trepidation about potential conflict and patriotic fervour.

“Faced with reckless US disregard of China’s repeated and serious representations, any countermeasures taken by the Chinese side will be justified and necessary, which is also the right of any independent and sovereign country,” Foreign ministry spokesperson Hua Chunying told a daily briefing in Beijing .

During a phone call last Thursday, Chinese President Xi Jinping warned US President Joe Biden that Washington should abide by the one-China principle and “those who play with fire will perish by it”.

Biden told Xi that US policy on Taiwan had not changed and that Washington strongly opposes unilateral efforts to change the status quo or undermine peace and stability across the Taiwan Strait.

White House national security spokesperson John Kirby said on Monday that Beijing’s responses could include firing missiles near Taiwan, large-scale air or naval activities, or further “spurious legal claims” such as China’s assertion that the Taiwan Strait is not an international waterway.

“We will not take the bait or engage in sabre-rattling. At the same time, we will not be intimidated,” Kirby said.

Beijing considers Taiwan to be part of its territory and has never renounced using force to bring the island under its control. Taiwan rejects China’s sovereignty claims and says only its people can decide the island’s future.

Accustomed to being caught in the middle of China-US tensions, people in Taiwan expressed mixed views on a Pelosi’s visit.

“Regarding China’s statements or hateful comments, this has actually always been like that. So, we look at it with peace of mind and are not overly scared,” Yang Hsing-ruel, a 22-year-old university student, said.

He expressed hope that the visit would bolster ties between Taiwan and the United States.

Also on Tuesday, the website of Taiwan’s presidential office received an overseas cyber attack and was at one point malfunctioning, a source told Reuters. The website was shortly afterwards brought back online, the source said.