My secret life as an 11-year-old BBS sysop 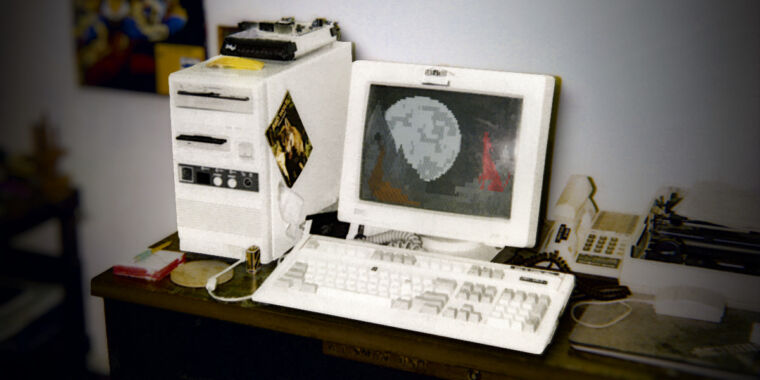 Thirty years ago last week—on November 25, 1992—my BBS came online for the first time. I was only 11 years old, working from my dad’s Tandy 1800HD laptop and a 2400 baud modem. The Cave BBS soon grew into a bustling 24-hour system with over 1,000 users. After a seven-year pause between 1998 and 2005, I’ve been running it again ever since. Here’s the story of how it started and the challenges I faced along the way.

In January 1992, my dad brought home a gateway to a parallel world: a small black plexiglass box labeled “ZOOM” that hooked to a PC’s serial port. This modem granted the power to connect to other computers and share data over the dial-up telephone network.

While commercial online services like CompuServe and Prodigy existed then, many hobbyists ran their own miniature online services called bulletin board systems, or BBSes for short. The Internet existed, but it was not yet widely known outside academic circles.

Whereas the Internet is a huge connected web of systems with billions of users, most BBSes were small hobbyist fiefdoms with a single phone line, and only one person could call in and use it at a time. Although BBS-to-BBS message networks were common, each system still felt like its own island culture with a tin-pot dictator (the system operator—or “sysop” for short) who lorded over anyone who visited.

Not long after my dad brought home the modem, he handed off a photocopied list that included hundreds of BBS numbers from our 919 area code in North Carolina. Back then, the phone company charged significantly for long-distance calls (which could also sneakily include parts of your area code), so we’d be sticking to BBSes in our region. This made BBSes a mostly local phenomenon around the US.

With modem in hand, my older brother—about five years older than me—embraced calling BBSes first (we called it “BBSing”). He filled up his Procomm Plus dialing directory with local favorite BBSes such as The Octopus’s Garden, The Body Shop, and Chalkboard. Each system gained its own flavor from its sysop, who decorated it with ANSI graphics or special menus and also acted as an emcee and moderator for the board’s conversations.

I have a distinct memory of the first time I realized what a BBS was. One day while I looked over my brother’s shoulder, he showed me the file section of one of those BBSes—a list of available files that you could download to your local computer. Pages of free-to-download shareware games scrolled by. My eyes widened, and something clicked.

“You can download games for free?” I remember thinking. I noticed one file labeled “RAMPAGE.ZIP” that was one hundred kilobytes—or “100K,” as listed. Thinking of Rampage on the NES, which was one of my favorite games at the time, I asked my brother to download it. He declined because it would have taken over five minutes to transfer on our 2400 BPS modem. Any file around one megabyte would take about an hour to download.

Online time was precious back then. Since most BBSes only had one phone line, you didn’t want to hog the line for too long or the sysop might boot you. And there was extra jeopardy involved. Since we were using our regular house telephone line to connect, the odds that my mom would pick up and try to dial out—thus ruining the transfer process—remained very high. But whatever the risks, the thrill of remote projection by computer sunk into me that day and never left.