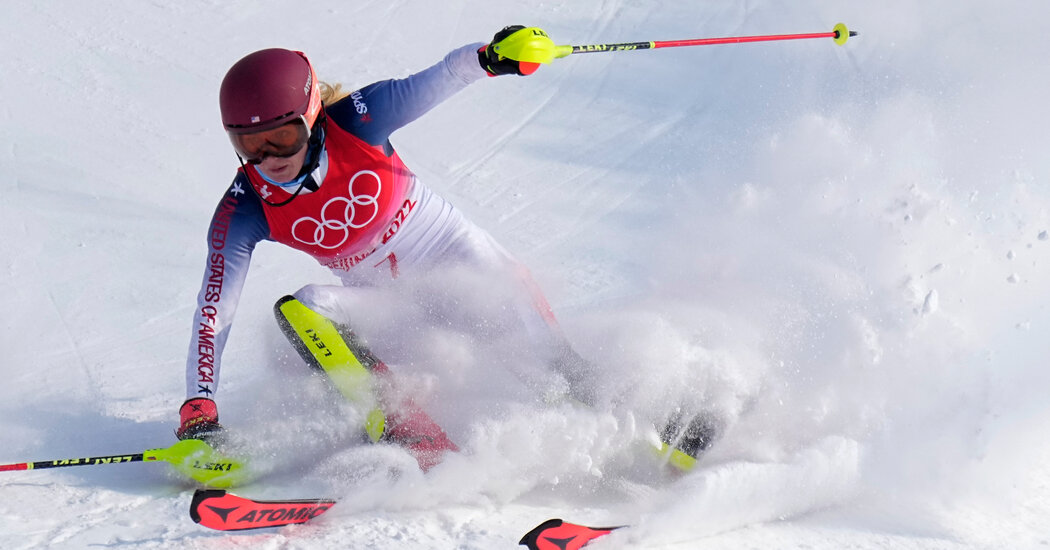 In a stunning result, the two-time Olympic champion Mikaela Shiffrin failed to successfully navigate more than a handful of turns in Wednesday’s women’s slalom and was disqualified from a second consecutive race this week at the Beijing Olympics.

Shiffrin, who was expected to contend for multiple gold medals at Beijing, had trouble in her run almost from the beginning, with her feet and arms not in sync, her balance teetering and the gates seeming to come at her faster than she could react. Shiffrin nearly fell rounding the fourth gate, and while she was still upright, her usually composed bearing was harried. As she passed the fifth gate she was heading for the side of the trail and knew her race was over.

Disqualified before the sixth gate, she skied to the protective netting at the trail’s edge, clicked out of her ski bindings and sat down, resting her head atop her knees. After more than 20 minutes, a time during which Shiffrin was consoled by members of her coaching team who knelt next to her in the snow talking into her ear, she finally rose and skied slowly to the side and bottom of the racecourse.

“I had the intention to do my best skiing and my quickest turns,” Shiffrin told reporters, fighting back tears. “But in order to do that I had to push the line, the tactics. And it is really on the limit then. And things happen so fast that there was really no space to slip up even a little bit. ”

She described her feelings as she was sitting on the side of the trail, her rivals passing her on their first runs, saying she was overcome by disappointment and a feeling of having let herself and others down.

“I was trying to look back and think back on the last days,” she said, “and think what I have been trying to do and what I have been doing with my skiing that would suggest that on the fifth gate I would push myself a little bit too hard to actually not be able to stay on the course. ”

Shiffrin also reflected on her father, Jeff, who died suddenly two years ago in an accident at the family home in Colorado, a trauma that Shiffrin has worked to recover from.

Struggling to speak, she said that going through grief had given her perspective, but that she just wanted to call her father and hear his voice. “So that does not make it easier,” she said. “He would probably tell me to just get over it, but he is not hear to say that, so on top of everything else I am pretty angry at him too.”

Shiffrin, 26, won the 2014 Olympic Games slalom and has dominated the event ever since, winning more World Cup slalom races (47) than any other racer, male or female. One of the most consistent racers on the World Cup, Shiffrin rarely makes miscues – when she failed to finish a slalom early last month, it was the first time that had happened in nearly four years.

Monday, she also skied out of the course, and fell, moments after beginning her first run in the women’s giant slalom, another event she was expected to contend for a gold medal. Nothing in Shiffrin’s professional career would have portended such quick, complete, recurring failure on ski racing’s biggest stage. Slalom is ski racing’s most dauntingly precise discipline but for the most decorated slalom skier in history to last about five seconds in her best event, and in a consequential Olympic race that she has spent four years preparing for, is almost unfathomable.

Shiffrin has spent the past weeks talking extensively about all the external obstacles that could prevent her from having success at these Games. She tested positive for the coronavirus in December and was dreading all the logistical issues with getting to China and the pandemic protocols of life at the Olympics.

In her first days here, she often discussed the wind, and the randomness of what could transpire on a gusty mountain. But none of those factors have come into play here. She did not mention anything about the nerves that may have caused her to last just 12 gates in two races combined.

Shiffrin, a three-time Olympic medalist, is still slated to compete in Friday’s women’s super-G as well as the downhill and the Alpine combined.

The first run leaders were Lena Duerr of Germany with a time of 52.17. Michelle Gisin of Switzerland was just .03 of a second behind Duerr and Sara Hector of Sweden, who won the women’s giant slalom Monday, was in third place, trailing Gisin at .08 of a second. Petra Vlhova, whose rivalry with Shiffrin this season has been a major storyline, had a plodding, slow run and was in eighth place, .72 of a second behind Duerr.