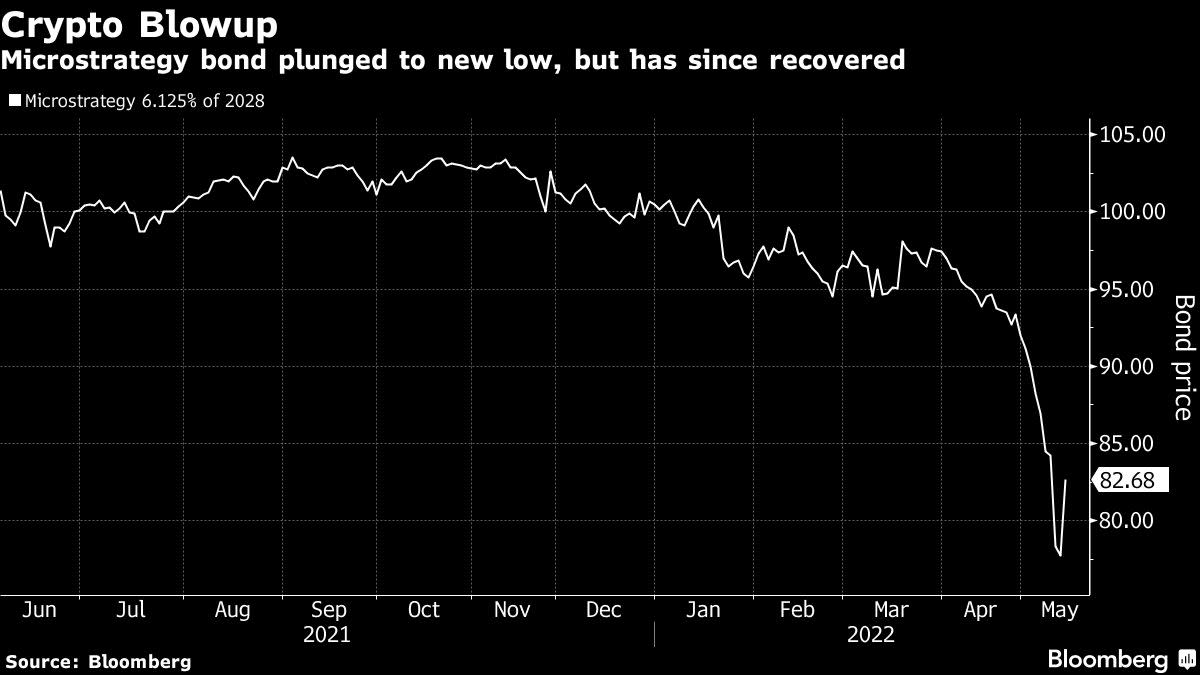 (Bloomberg) – MicroStrategy Inc.’s stock rallied Friday, recovering a bit from its recent routes. Neither the ups nor the downs are much of a surprise. The company is simply tracking the rises and falls of Bitcoin, which Chief Executive Officer Michael Saylor has tied his software maker to inexorably.

MicroStrategy has been on a two-year, debt-fueled Bitcoin buying spree, accumulating billions of dollars worth of them – shifting its corporate focus from developing software to becoming a proxy for the price of Bitcoin.

With borrowing, there are rules. Loans often require collateral, and you have to pay back sometimes-giant principal balances when debt matures. MicroStrategy faces both of those obligations. Bitcoin this week crumbled below $ 26,000, putting within reach price levels that boost the pressure on MicroStrategy.

The company’s shares have lost more than half their value in the past few weeks amid a Bitcoin rout. Its junk bonds have fallen, too, sinking at one point Thursday below 72 cents on the dollar – nearing distressed levels. Both have rebounded Friday, with the stock up as much as 29% and the junk bonds back above 82 cents.

MicroStrategy borrowed $ 205 million through a three-year term loan in March, which the company then used to buy more of the cryptocurrency. Thousands of Bitcoin are pledged as collateral, which must be valued at no less than $ 410 million. If Bitcoin drops to about $ 21,000, the company would need to pledge more collateral, according to an earnings conference call earlier this month.

On Tuesday, Saylor took to Twitter to assure investors, saying that MicroStrategy has an additional 115,109 Bitcoin the company can pledge to the loan. If Bitcoin fell below $ 3,562, the company could post other collateral, he wrote.

And then there’s the bonds. That includes $ 2.2 billion of debt from two convertible bonds and a junk bond. The debt matures between 2025 and 2028. At the end of March, MicroStrategy owned 129,218 Bitcoin. Those tokens would need to be trading above roughly $ 18,600 each to be able to fully pay off the principal in a firesale scenario – which, to be clear, is not necessarily what looms ahead for MicroStrategy.

The notes have no immediate triggers tied to the price of Bitcoin, allowing the company to ride out ups and downs. The first maturity hits in March 2025 for the $ 205 million loan. Then comes the $ 650 million convertible notes maturing in December 2025, which will need to be repaid if the stock price does not recover. If those are still outstanding, the $ 500 million high-yield bond “springs” ahead to September 2025 – giving MicroStrategy a large pile of debt to pay back all at once.

MicroStrategy is essentially a levered Bitcoin play – its original software-development business does not generate enough earnings to repay all the debt. The company has to rely on Bitcoin increasing in value to make its strategy work.

Notably, that junk bond offers significant downside protection for investors – it’s secured by the company’s positive cash flow and software intellectual property plus the Bitcoin that it helped purchase, which made risk-averse debt investors more comfortable with buying the debt.

But even that business is seeing a hiccup. Revenue declined 2.9% to $ 119.3 million in the first quarter of 2022, the lowest quarterly revenue since MicroStrategy started its Bitcoin investment strategy in August 2020. It had posted modest revenue gains for four consecutive quarters in 2021.