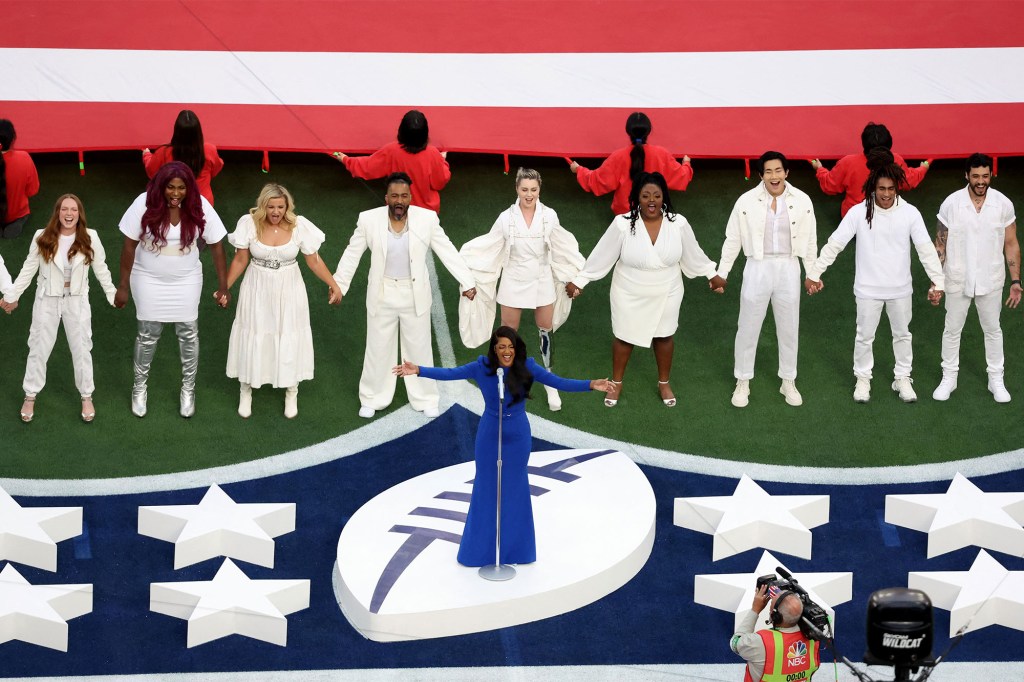 Country star Mickey Guyton – resplendent in royal blue – united the players, the crowd and the country with her performance of the national anthem at the Super Bowl on Sunday.

Backed by a choir that, despite being decked out in all white, represented the diversity of America, the 38-year-old singer turned “The Star-Spangled Banner” into a musical statement about joining together and embracing each other’s differences.

As a black female country artist who has had to overcome racism in the predominantly white male genre, it was a telling moment that she seized.

Beginning the national anthem a cappella, Guyton let the purity of her voice ring through Sofi Stadium in Inglewood, California before the Los Angeles Rams faced off against the Cincinnati Bengals.

Adding some flourishes, she remained pretty faithful as she delivered the song with assured, confident ease.

Interestingly, her version was not too countrified – with hardly a hint of twang from the Texas native. And there was minimal melisma until the big finish that she nailed almost casually.

It’s the latest of big, barrier-breaking moments for Guyton in the last year. She delivered a powerful performance of her song “Black Like Me” last March, then became the first African-American woman to co-host the Academy of Country Music Awards in April, and then rocked a supersize Afro while doing “Love My Hair” at the Country Music Association Awards in November.

Guyton was preceded by Los Angeles native Jhené Aiko performing “America the Beautiful.” It made for back-to-back moments of black girl magic on the biggest stage in the game.

Dressed in a purple glittery gown – with a sexy slit up to her waist on the left – the Grammy-nominated alt-R & B singer delivered one of the most sultry, chilled-out versions of “America the Beautiful” that you’ll ever hear . It was a vibe.

It all set the stage for some other black music stars to take the SoFi field later for the halftime show, including Dr. Dre, Kendrick Lamar, Snoop Dogg and the Queen of Hip-Hop Soul, Mary J. Blige. They will be joined by another hip-hop heavyweight, Eminem, when the halftime festivities go down at Super Bowl LVI.