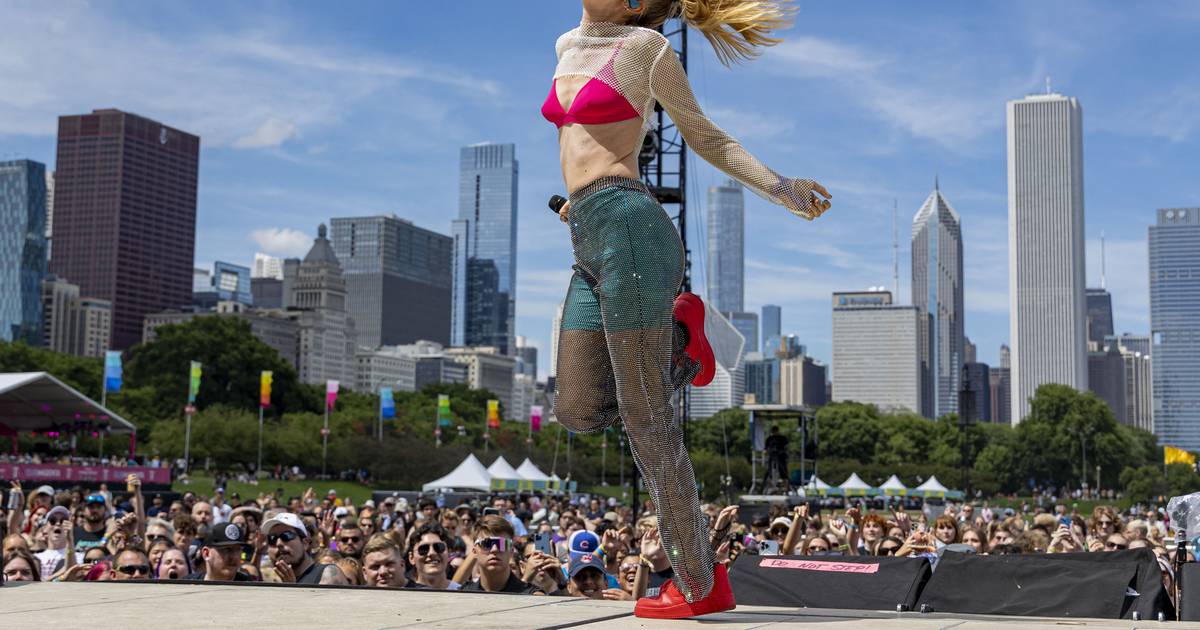 Under a hazy blue sky, Lollapalooza opened Thursday for its long weekend in Grant Park, quickly becoming a small city within a city for young music fans. The first day of Chicago’s biggest music festival is sometimes said to be less crowded and lower-key but you could be forgiven for thinking otherwise inside the fence. A good chunk of the crowd sported logos for Metallica, the headliner band for the night. Outside, near the main entrance at Ida B. Wells Drive and Michigan Avenue, a protest of Chicago’s curfew had the festival as its backdrop.

Hanging over day one were the kind of concerns you’d expect for a festival with a daily capacity of about 100,000 attendees on the lakefront: Security concerns less than a month after a mass shooting at the Fourth of July parade in Highland Park. Fears about COVID-19 as local case numbers remain stubbornly high.

More than 170 music acts will take to Lollapalooza’s eight stages over the festival’s four days. Along with the T-Mobile and Bud Light Seltzer main stages, Kidzapalooza is back this year for the first time since 2019. Other music headliners include Lil Baby on Thursday, Dua Lipa on Friday, and J. Cole on Saturday, and Green Day is slated to close out the party Sunday night.

First in line in the north entrance chutes, Caroline Mdo, Liz Sandoval and Helena Ruhnke, all from the Chicago area, waited for the gates to open.

“We just wanted to get a chance to check it all out first day,” said Mdo, 19. This summer was her second Lollapalooza, and her friend Ruhnke’s first. Sandoval, 24, was planning to make a bee line for the T-Mobile stage to camp out all day to see Metallica at 8:15 pm “I’ve been listening to them since I was 10 years old,” she said — a fandom she inherited from her mom.

The trio had concerns about safety and security. Mdo said she was groped last time she attended, in a packed mosh pit. “In a crowd, people just grab you, sometimes it really does happen,” she said. She knows Lollapalooza has security on-site to react specifically to such incidents, but she said she felt “they’re not going to get there fast enough to do anything.”

Lollapalooza has a zero-tolerance anti-harassment policy and instructs anyone with an issue to contact any security or staff member or to go to one of the medical tents on the grounds.

The group’s other gripe was tied to the clear back policy Lollapalooza and other major music festivals rely on to speed entry. “You have to watch out, people can see your wallet or whatever’s in there and just go for it,” Mdo said. She approved of her friend’s strategy to wear her bag across the front.

Also Thursday morning, more than a few dozen people gathered outside the entrance to protest Chicago’s 10 pm curfew for minors enacted in May, following a teen’s fatal shooting at The Bean in Millennium Park.

“These curfews are disproportionately enforced against Black and brown kids,” said Kara Crutcher, attorney for Good Kids Mad City and Brighton Park Neighborhood Council, the organizations behind the protest.

She referenced a “Peace Book” ordinance as an alternative for the curfew. The youth-led, anti-violence ordinance was introduced to City Council in June, backed by Good Kids Mad City.

“As a young Black man I’m tired of being stopped and criminalized by the police,” said James Robinson, 18, of Good Kids Mad City. “They are already stopping and frisking us but now they got another reason.” Others nearby snapped their fingers and nodded in agreement.

“Chicago has shown for over a decade … that they have not implemented any strategies to protect young people in this city, especially Black and brown youth,” said Camilla Williams, 36, a mentor at Good Kids Mad City. “So the Peace Book is something that will give them the opportunity to live. At leve.”

Crutcher also spoke to what she hinted was a double standard since ticketed events such as Lollapalooza, which ends at 10 pm, are not subject to a curfew.

Inside the festival grounds, people spread out into Chow Town and the stages once the gates opened — heralded by the “Star Wars” theme music, as is tradition — a bit after 11 am

Kassidy Huelsbeck and Maria Lopez came in from Wisconsin to attend their first Lollapalooza. They stood in front of the Solana x Perry’s stage while the field was still fairly empty. For Huelsbeck, it will be her first concert ever.

“I hope to experience what concerts are like this weekend because I’ve never been to one,” Huelsbeck said.

She added that she’s most excited to see J-Hope on Sunday, especially since the South Korean rapper, who is part of the mega popular boy band BTS, just recently released an album. J-Hope is slated to be the first South Korean artist to headline a major US music festival.

Nichole Rintel and Teddy Kazmierski came from the Detroit area for Lollapalooza. Rintel sported elaborate cat makeup and said this was her third time at the festival. It looks huge to her every year, she said.

The pandemic was not top of mind, but, she said, “I will say I was surprised to see no protocols.”

Lollapalooza, which is put on by Austin, Texas-based C3 Presents, follows current standards for major music festivals and adheres to local COVID-19 guidelines for outdoor events, as set by the Chicago and Illinois departments of public health. Unlike the guidance for last summer’s party, it is not requiring face coverings or proof of vaccination or a negative test for entry.

This week, all counties in Illinois including Cook were considered high-transmission areas, according to the Centers for Disease Control and Prevention. According to the Chicago Department of Public Health, mitigation changes such as mask and vaccine requirements will be made based on Chicago’s hospital burden, which remains low.

Over by the T-Mobile stage, the smell of mulch and grass dominated the atmosphere as people gathered for Maude Latour’s 2:15 pm set.

Two chants of “Maude! Maude! Maude!”, the recent Columbia graduate Latour ran out on stage, full of energy and music. After singing the hits “Furniture,” “Walk Backwards” and “Superfruit,” Latour addressed the crowd. “How the (expletive) are we doing, Chicago?” she asked the crowd. The side seams of her shiny pants had ripped from all her jumping around. After singing her latest single, she took a moment to offer a few dedications before singing “Lola.”

The festival famously packs downtown hotel rooms as well as CTA and Metra trains, drawing attendees from around the region and the country.

This summer is the first time New Yorkers Samara Lindberg, 22, and Cassidy Price, 22, came to Lollapalooza. And the first time they’ve visited Chicago. They said they were excited to see Tinashe and Ashnikko. Wearing all-black outfits — except for the glittery, colorful stars on Lindberg’s shirt — the friends shared how they prepared for the festival.

“When we decided we could make these two days I just looked up the different artists I didn’t know and listened to their music and I made a Lollapalooza playlist for us,” Lindberg said. “So we went through and listened and learned.”

People know the headliners, like Metallica and Dua Lipa, Price added. But smaller artists also get hourlong sets. “Being here, it’s like, you get to catch up to their new stuff, but also, like, little throwbacks,” she said.

Also Thursday, WGN-TV reported that musician and Lollapalooza founder Perry Farrell told reporter Dean Richards that the festival had reached an agreement with Mayor Lori Lightfoot to extend its contract in the park for 10 more years; Lollapalooza had reached the end of its current contract. C3 Presents told the Tribune that no contract was yet in place.

“We have no official agreement, but we are hopeful to have one as conversations continue,” said spokesman Guy Chipparoni.

At the end of the afternoon, Still Woozy finished up his energetic set on T-Mobile at 5:15 pm The musician aka Sven Eric Gamsky poured sweat and bounced tirelessly on his heels, shouting, “Thank you Lollapalooza, we love you!”