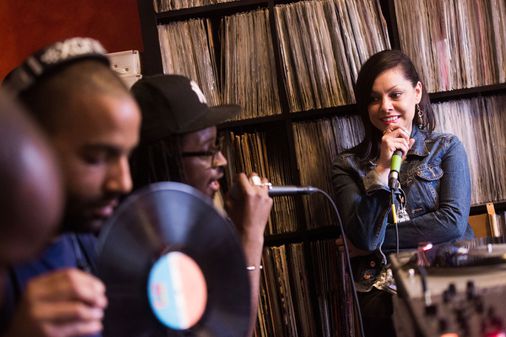 She had started the Revive concerts several years earlier, while still a Berklee student. “It’s important to honor the tradition of the music, and we still have shows that do that,” Ms. Stable said. “But we also have to honor the music of today and make it more relevant.”

The founder and chief executive of the Revive Music Group promotion company, Ms. Stabile had stepped back recently from her often exhausting devotion to work in order to focus on health matters, including depression. Her family and a family representative told media outlets that she was 39 when she ended her life in Valrico, Fla., On June 12.

A look at the news and events shaping the day, delivered a couple times a week with a side of humor and a dash of attitude.

“I do not have words for this one. Meghan was a true artist. A lover of music in its rawest essence. Gave her all in keeping the culture alive, ”the musician Questlove posted on Instagram, adding that“ we lost a gem & a champion in music. ”

An enthusiast for music’s past, present, and future, Ms. Stable encouraged performers and audiences to avoid pigeonholing what they played and heard.

“When people come to the show, it’s not even about either-or; it’s about the music, ”she said during an interview with NPR’s” Jazz Night in America “program in 2015.” Bottom line, end of the day, you walk away like, ‘That was a great show.’ You do not even care if it had anything to do with hip-hop or jazz or whatever. We get so stuck on categories and labels that you completely miss the point of really beautiful, authentic forms of art. ”

In 2012, as part of Berklee’s Summer in the City concert series, Revive Music Group presented ensembles performing jazz compositions, and then showing how the tunes were incorporated into hip-hop songs.

“Basically we haven’t really seen a lot of concerts that bridge the gap between jazz standards that were in fact sampled by prominent producers in hip-hop,” Ms. Stable told the Globe before staging the performances. “We wanted to help educate audiences about how important jazz was to hip-hop.”

By then she had moved her base of operations from Boston to New York City and was attracting national attention for her efforts, including a prominent 2013 profile titled “The Making of a Modern Impresario” in The New York Times:

“Ms. Stabile, who stands 5 feet tall, with a sweep of straightened brown hair pinned and tucked behind one ear, is a woman on a curious mission: to make jazz matter to the hip-hop generation, and to do so as a young woman in a jazz world dominated by older men, at a time when both jazz itself and the recording industry feel decreasingly relevant. ”

She had climbed to such heights from a childhood that, by her account, had not been easy.

“I got kicked out of four schools – three high schools and a middle school. For fighting, ”she said in the 2013 Times profile. “I went through a lot, and I made it through. It did not break me. ”

Even when she was young, music was a key part of her life.

“I just started singing one day. I was 7 or 8 and I just started running around the house and the neighborhood singing, ”Ms. Stable said in a 2017 interview posted on the c-qp.com design website.

She would knock on the doors of neighbors “and start singing to them,” she said. “It’s hilarious to think about it now. I got my first guitar when I was 14 and never put it down. ”

Meghan Erin Stabile was born in Grand Prairie, Texas, on July 26, 1982, according to obituary information her family placed on the website of RM Edgerly and Son funeral home in Rochester, NH

She grew up in Dover, NH, raised mainly by her grandmother Maureen Freeman and an aunt.

Ms. Stabile told the Times in 2013 that she had never known her father, and described her relationship with her mother, Gina Skidds, as abusive. According to the Times, Skidds died last year.

In the C.QP interview, Ms. Stabile said that after growing up in an area where “there were no music programs for kids and nowhere for me to thrive and grow musically,” moving to Boston introduced her to a wider world. “Berklee was a blessing, but of course, my focus shifted once I found out they had a music business program.”

While at Berklee, she landed a bartending job at Wally’s Café, a South End jazz club that has been a prominent part of Boston’s jazz scene for decades.

Being surrounded by musicians gave her “all the passion and energy I needed to be resilient and to persevere,” she told C.QP.

She produced three Revive concerts in her last semester at Berklee, and ultimately decided to relocate to New York, where her love of music and her multiple jobs to pay bills made for a demanding schedule.

“I was working as a waitress my first year in NYC. I remember stacking up my tips, saving and using the money to put on shows, ”she said.

“I took a lot of risks, dug into my own pocket, woke up early, worked 10 hours a day, produced and promoted shows at night, got back home at 4am, and did it all over again the next day. This has been my life for the past 10 years. I look back now and think how crazy I was, plowing through like that. ”

She recalled that “people would ask me all the time: ‘How can you do all of this? I see you everywhere, you’re literally everywhere. ‘ I had the same question, only my answer was ‘by the grace of God.’ “

In addition to her grandmother, Ms. Stabile leaves her brother, Michael Skidds, and sister, Caitlyn Chaloux, according to the funeral home’s information. Her siblings are raising money for a funeral service via GoFundMe.

In January 2020, Ms. Stabile participated in a panel discussion about physical and mental wellness during Winter JazzFest in New York. The night before the panel talk, she performed for the first time in about a dozen years at a Revive Yo Feelings benefit concert, singing a song “she said she’d written while in rehab,” NPR reported.

Before the song, “she delivered a raw, unflinching monologue during which she acknowledged that she had been raped at the age of 5 – but that when she told her family, nobody believed her,” DownBeat magazine said.

“It was an experience that taught me what neglect felt like, what betrayal felt like, what abandonment felt like,” she said from the stage, adding that in order to deal with what happened, she slipped into substance abuse and attempted suicide.

In the 2017 C.QP interview, Ms. Stabile said that God “is a very sensitive and important subject to me,” one that helped lead her to music and promoting musicians.

“I always felt like I was called upon to do this, there was no way I could have done all of what I’ve done without God,” she said. “I felt compelled and called to serve in this particular way.”

Bryan Marquard can be reached at bryan.marquard@globe.com.