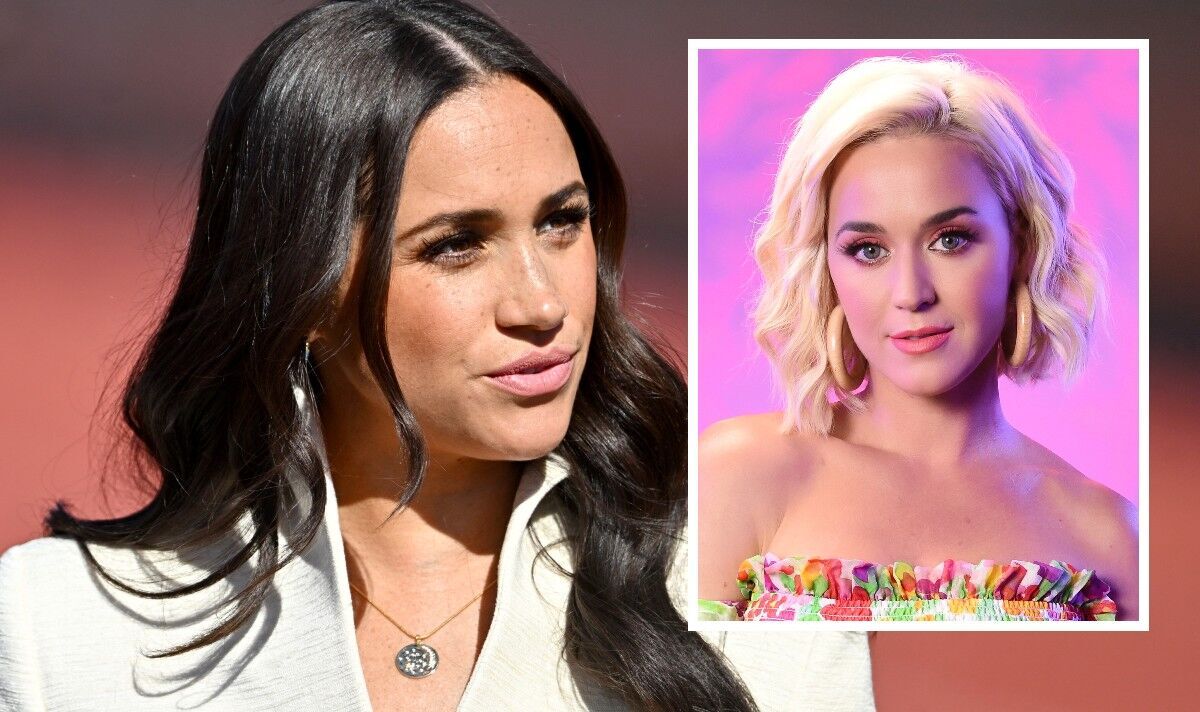 The Duke and Duchess of Sussex stepped away from royal duties in 2020 and are now forging a new life together in the US with their son Archie, three, and daughter Lilibet, one. The couple now resides in the desirable Californian town of Montecito, Santa Barbara. Located on the state’s Central Coast, the small neighborhood is home to an array of celebrities, including actor Orlando Bloom and his former wife Katy Perry.

Prince Harry, 37, is thought to be settling into his American surroundings well but it is claimed Meghan, 41, is upset with her neighbor Katy Perry over a comment made about the Duchess’s wedding dress in 2018.

A source said: “Orlando is very sympathetic towards Harry and Meghan and does reach out if he ever sees anything suspicious in the neighbourhood.”

They added: “However, Meghan is keenly aware of a comment that Katy Perry made in 2018 about her wedding dress and is notorious for holding a grudge.”

Perry had previously joked she “would have done one more fitting” when asked about the wedding during an appearance on Entertainment Tonight to promote American Idol in May of 2018.

Meghan is said to have felt slighted by the remark as it came during a time of immense pressure for the Sussex couple in the build-up to their bombshell exit from the Firm, a move dubbed Megxit.

The LA source said: “While the comment wasn’t meant to be hurtful, Meghan felt under siege at that time and was overwhelmed by arguments with staff, the Duchess of Cambridge, and Thomas Markle.”

The Duchess of Sussex and Perry are both mothers to one-year-old girls, but the insider was quick to dismiss any notion of forthcoming playdates for the young children.

They said: “I would not expect to see Meghan and Katy carpooling to PTA meetings anytime in the future!”

The Duke of Sussex was reported to have struck up a friendship with the father of Perry’s girl, Hollywood actor Orlando Bloom.

But the LA insider was quick to downplay the claims, insisting the men were not as close as previously reported.

They told The Daily Star: “While Harry is sincerely grateful to anyone who is proactive in protecting his family, The Duke of Sussex and Orlando fit more into the acquaintance category than friends.”

It comes after Bloom voiced Prince Harry in the controversial HBO cartoon series, The Prince, which lampooned the Firm and in particular Prince George.

The Duke of Sussex was said to be “aware” that Bloom was taking the part, with the show’s creator Gary Janetti telling Watch What Happens Live with Andy Cohen at the time: “I don’t know if Harry has said anything to Orlando about it, but I know before the show premiered, he was aware that Orlando was doing it. And he seemed to have a sense of humor about it.”

The satirical series attracted backlash for taking aim at Prince George, with some branding the mockery “cruel”.

And although the Duke and Duchess of Sussex were not spared, Bloom told The Hollywood Reporter the show was “not malicious or intended to be”.

Prince Harry is now thought to be putting the finishing touches to his new memoir, whose publisher Penguin Random House insists will be an “accurate and wholly truthful” portrayal of the Duke’s Royal Family experience.

The book, thought to be ready for a Christmas release date, threatens to tear open old rifts within the Firm as the Duke opens up on his personal struggles.

Meanwhile the Duke and Duchess of Sussex’s charitable organization Archewell was recently awarded a gong for its work advocating for Afghan refugees.

The Duke and Duchess of Sussex are to be given the Partner Organization Award next week in New York.

Executive Director James Holt of the Archewell Foundation will be receiving the award on their behalf.

He said: “It’s an honor to be recognized by Human First Coalition, whose steadfast work in Afghanistan has played a critical role in delivering much-needed aid and resulted in the successful evacuation and resettlement of thousands globally.

“We share a commitment to supporting families and veterans and are grateful for their partnership.”