Meet ‘Jedi,’ ‘Cyclops,’ and the rest of this year’s newly named right whales 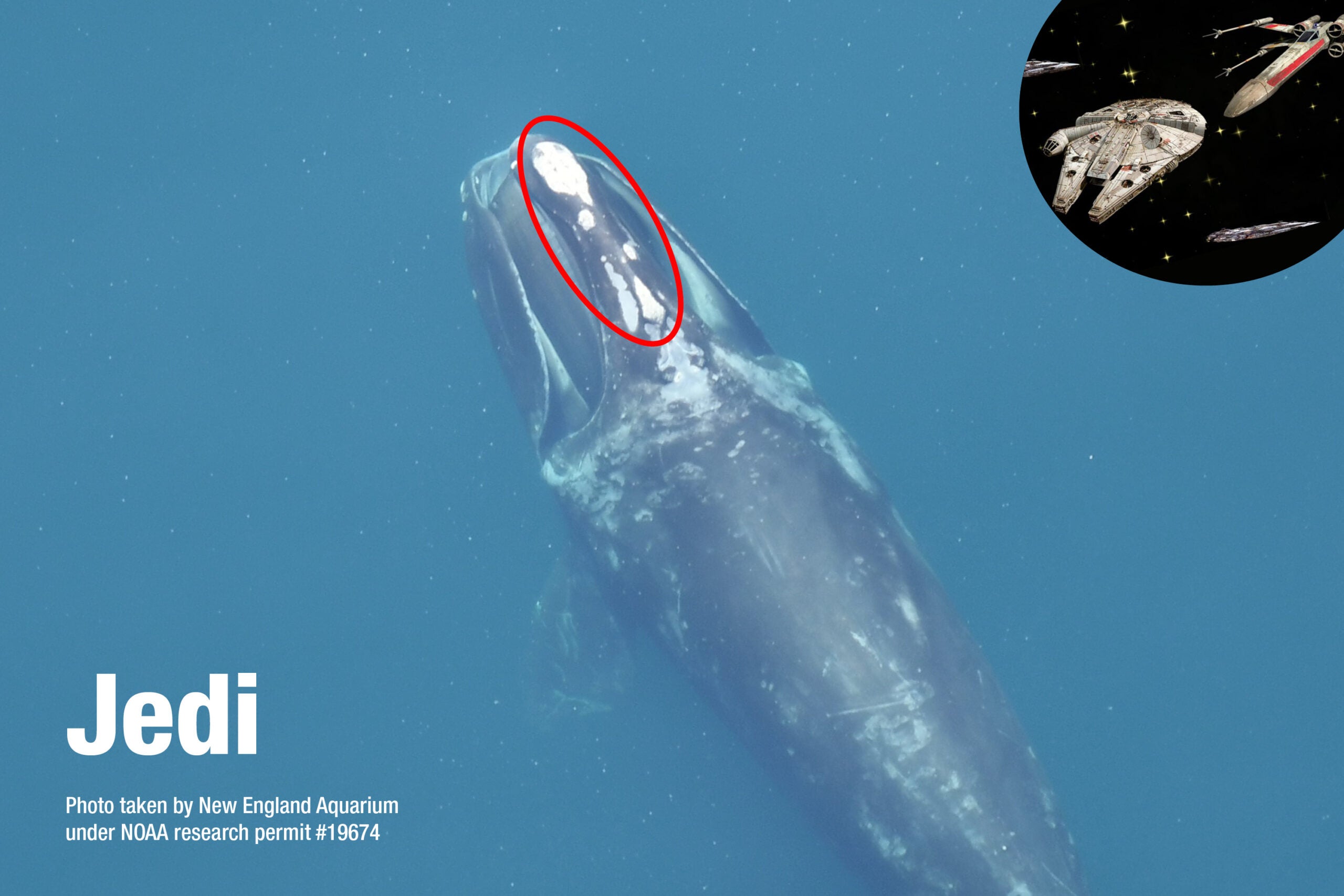 With an estimated population now below 350 individuals, scientists need to keep track of as many North Atlantic right whales as possible. That’s why, every year, a group of the critically endangered animals are given unique names like “Jedi,” “Cyclops,” and “Ghost.”

Those are just a few of the names given to the 2022 class of North Atlantic right whales that received their names recently.

The names are generally meant to evoke physical features of the whales, so that they are easily recognizable.

“When choosing names for these whales, we try to find a unique, physical feature that can serve as a pneumonic device so when we see that whale in the field, we’ll say, ‘I recognize that heart-shaped scar — that’s Aphrodite!’” New England Aquarium Senior Scientist Philip Hamilton, who manages the North Atlantic Right Whale Catalog, said in a statement.

The names must be short and easily remembered so that researchers can identify individual whales in real time as they conduct field work, according to a release from New England Aquarium. Each whale is already assigned a four-digit number in the catalog, but scientists and interested members of the public alike often have an easier time remembering fun, unique names.

While any physical feature can be used to inspire a whale’s name, the irregular white growths on right whale heads known as callosities are a frequent source of inspiration. The overall callosity pattern on “Jedi” resembles a spaceship battle from “Star Wars,” according to the New England Aquarium’s Anderson Cabot Center. The callosities on “Beaker” resemble the “Muppets” character of the same name, and “Cyclops” has one large white spot clearly visible on her head.

Scars are also sometimes used to inspire names. “Warrior” has a white scar across her head that resembles war paint, and “Cascade” has scars on her left lip that look like a waterfall.

“Whale research is often complex or otherwise inaccessible to the public, so sharing this whale naming process in a lighthearted way allows people to not only become familiar with these individuals, but provides an inside look at some of the collaborative work being done by researchers,” Monica Pepe, conservation and education policy manager at Whale and Dolphin Conservation, said in a statement.

The whales are named through a collaborative process between the New England Aquarium, Whale and Dolphin Conservation, and members of the public. Each year, a group of unnamed whales are nominated by researchers to receive a name. Members of the public, such as students or donors, can propose names along with researchers. Then, members of the field teams vote on the proposed names in a ranked-choice system. The final names are revealed at the annual North Atlantic Right Whale Consortium.

North Atlantic right whales are among the most endangered large whales on the planet. Data released in October showed a continued decline in population numbers, with more whales dying than were born last year.

The number of North Atlantic right whales steadily increased from 1990 through 2010. Then, population estimates plateaued for about five years before starting to decline in 2015, according to the data.

There were no first-time mothers who gave birth over the past year, the aquarium said, which supports previous research that found the amount of females capable of breeding is decreasing overall.

A glimmer of good news can be found in the fact that, in October, researchers said that there had been no detected right whale mortalities in 2022. But that does not paint the full picture.

“There has been a lot of focus on the fact that no right whale mortalities have been detected in 2022, which is certainly a good thing. While we can be cautiously optimistic about this, we know that only one third of right whale deaths are observed, so it is likely that some whales have died this year that were not observed,” said Scott Kraus, chair of the North Atlantic Right Whale Consortium, in a statement at the time. “Additionally, we continue to see unsustainable levels of human-caused injuries to right whales. A lot of work by many stakeholders has gone into protecting these whales, but the hard truth is it hasn’t been enough.”