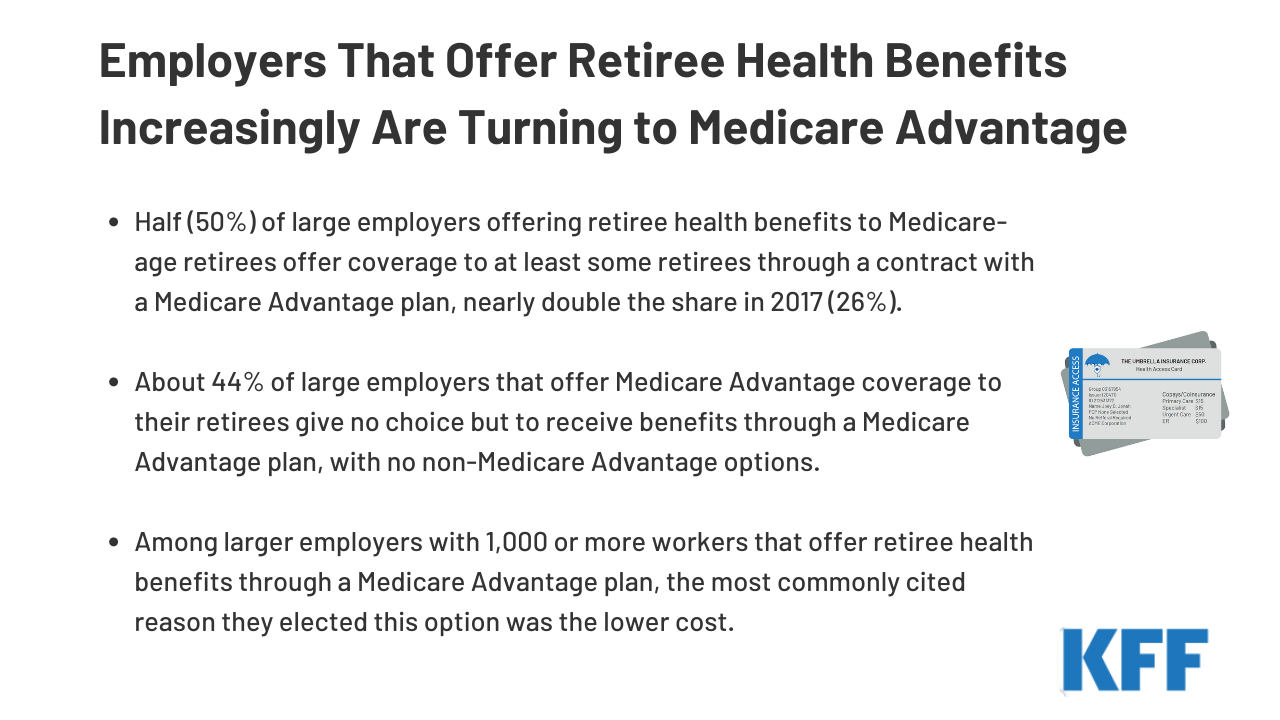 This analysis uses data from the 2022 KFF Employer Health Benefits Survey to examine the extent to which large private and non-federal public employers that offer retiree health benefits are turning to Medicare Advantage and why they are making this shift. However, the Survey does not include information about union-administered benefits. For additional information about methods, see Survey Design and Methods.

Based on the Survey, we find:

The share of Medicare beneficiaries offered retiree health benefits has been eroding over time. For people with Medicare, employer or union-sponsored retiree health benefits can help to make Medicare more affordable, by helping to cover deductibles and cost sharing and by providing supplemental benefits that are not covered by traditional Medicare. Until fairly recently, employer and union-sponsored retiree health coverage was typically designed to coordinate or wrap around traditional Medicare. More recently, employers with retiree health obligations have turned to Medicare Advantage, an approach that could have implications for retirees’ core Medicare benefits, particularly if the only option for retirees is a Medicare Advantage plan, which may impose restrictions, such as more limited provider networks and prior authorization requirements.

Medicare Advantage plans, which are mainly HMOs and PPOs, provide all Medicare-covered benefits, often for no additional premium for plans open for general enrollment (other than the Part B premium), typically include Part D drug coverage, and may cover other benefits such as vision, dental, and hearing benefits. In 2022, over 5 million Medicare beneficiaries receive their Medicare-covered benefits and supplemental retiree health benefits through an Employer Group Waiver Plan (EGWP). While group enrollment has accounted for roughly the same share of total Medicare Advantage enrollment since 2010 (18%), the actual number of group enrollees has increased from 1.8 million in 2010 to over 5 million in 2022 as Medicare Advantage enrollment overall has grown.

Under this approach, employers and unions contract with a Medicare Advantage private insurer to provide all Medicare-covered benefits as well as supplemental benefits. The employer (or union) and/or private insurer (acting on behalf of an employer) receives a payment from the federal government (Medicare) and agrees to cover all Medicare-covered benefits, along with a package of supplemental benefits for retirees in their group. Payments are based on the bids of other Medicare Advantage plans available to individual (non-group) enrollees, adjusted for geography and risk. While Medicare pays for retirees in group plans, there is very little data on the premiums, cost sharing, supplemental benefits, and provider networks in these plans.

Employer plans are eligible to receive rebates and bonus payments from Medicare, both of which help cover the costs associated with supplemental benefits for their retirees. Bonus payments are based on a plan’s quality rating, using a system of stars. Bonus payments for group Medicare Advantage plans reached $2 billion in 2022. On average, bonuses for group plans ($396 per enrollee in 2022) are higher than for Medicare Advantage plans open for general enrollment ($358).

MedPAC estimates that Medicare Advantage payments to employer plans will average 102 percent of FFS spending in 2022, which contributes to higher Medicare spending that ultimately affects the solvency of the Medicare Trust Fund and higher Medicare premiums paid by all beneficiaries. In other words, Medicare spends more per retiree in group Medicare Advantage plans, on average, than it pays for similar people in traditional Medicare.

Among all large firms (firms with 200 or more workers) that offer retiree health benefits to Medicare-age retirees, 50% provide these benefits through a Medicare Advantage plan in 2022, almost double the share in 2017 (26%) (Figure 1).

Among firms with 5,000 or more workers offering retiree benefits, 60% offer retiree health benefits through a Medicare Advantage plan in 2022, a share that has doubled over the same time period (29%).

Among firms with 1,000 or more workers offering retiree benefits through a contract with a Medicare Advantage plan, the primary reason the firm elected this option is the lower cost (Figure 3).

Among employers with 1,000 or more workers that offer retiree benefits through a Medicare Advantage plan, about four in ten employers (42%) said the primary reason they selected this option was due to the lower cost. Nearly a quarter (23%) said they don’t know, while fourteen percent said it provides flexibility for enrollees, eight percent said it has better coverage options, seven percent said it is administratively simpler, and five percent selected it for another reason.

As the share of large employers offering retiree health benefits to Medicare-eligible retirees continues to decline, firms that still offer these benefits are increasingly turning to Medicare Advantage, often to lower their own financial liability, which raises questions about the implications for retirees, employers and the Medicare program.

For some large employers, the shift to Medicare Advantage appears to be a strategy to maintain benefits for their retirees, without terminating coverage or adopting other changes that more directly shift costs onto retirees. However, the shift to Medicare Advantage has implications for retirees that extend beyond supplemental benefits. This approach has the potential to restrict retirees’ access to doctors and hospitals, depending on the plan’s provider network, and subject retirees to cost management tools, such as prior authorization, that may limit access to Medicare-covered services. Limited provider networks was a major area of concern when New York City recently tried to move its city worker retirees into a Medicare Advantage plan to save an estimated $600 million per year in health care costs (and may explain why the implementation of this plan is on hold due to litigation and the withdraw of the insurer who was set to run the plan). If retirees are dissatisfied with their network, their only option may be to give up retiree benefits altogether, although they would retain Medicare, and have the option to choose traditional Medicare (potentially with a Medigap supplement) or a Medicare Advantage plan (including zero-premium plans).

The rising number of Medicare-eligible retirees into Medicare Advantage plans raises questions about the impact on Medicare spending, particularly because Medicare pays more for enrollees in Medicare Advantage plans (including in group plans) than for traditional Medicare, on average. Further, the rising number of Medicare Advantage enrollees in group plans highlights the lack of transparency about these plans, including information about which employers are offering Medicare Advantage, and makes it difficult to assess the extent to which Medicare overpayments may be offsetting employers’ liability for retiree health coverage, the scope of coverage under group plans, such as provider networks for Medicare-covered and other benefits, the scope of extra benefits, and premium and cost-sharing requirements.

This work was supported in part by Arnold Ventures. KFF maintains full editorial control over all of its policy analysis, polling, and journalism activities.


Mike Flanagan’s Intrepid Pictures is moving from Netflix to Amazon